I decided to try pickerel fishing again with some people new to the TFF club. This section of water was new to me. We hiked down and split up at the waters edge. 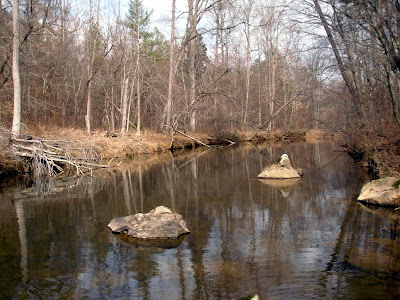 I figured something has to be in that tree along the left side. The bass bandit fly I tied has been pretty good to me lately. On the third cast I felt a tug and soon had my first pickerel. The fish inhaled my fly. 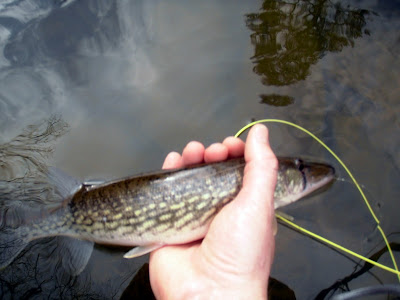 The tricky part was trying to get the fly out of the fishes mouth with out it biting me. The fish acted very docile when I had it around the belly and side. Anytime I went near its face it went berserk. I decided to check out it's mouth to see what kind of teeth I was dealing with and if I could lip the fish. Maybe these fish aren't as nasty as people say. I had a nice lip hold on the fish when it gave a head shake, snapped my leader and gave me a nice souvenir of why pickerel should be respected. It cut my thumb with the efficiency of a scalpel. Luckily the fish was small and didn't do much damage. If the fish had been much bigger that would have been the end of my day.

I worked more water but didn't have much luck so I walked the banks sight fishing. I did see two fish in habitat just as I've read. Rip rap and fallen trees right against the bank. One fish was so close I almost stood directly over it when looking in the water. This creek gets a ton of foot traffic and I wondered if the fish were used to it. I made a dump cast to the fish and first it swam away. I wasn't surprised but as I took my line out of the water I noticed it charge back. Did I really have another shot? I cast again and made a few twitches with the fly, the pickerel moved closer and closer but didn't commit. I made one last cast and this time I did a type of jerk up and down motion with the fly. The fish moved closer as the fly was falling and the instant the fly was about to touch the ground the fish engulfed it. I went to set the hook and my leader was cut instantly.

I walked maybe 10ft down stream and spooked another fish. Usually with most species that is it you've lost your chance. I cast over in front of the fish and worked my way back the fish stopped swimming, swooped around and charged the fly like a barracuda. I think I've found a fish more aggressive than a bluegill and I am in love. The same action worked on this fish. A few small jerks and a dead dive to the bottom. This fish didn't commit as much as the last one. It slashed at the fly and took off. That was the last fish I saw but my friend and I worked a ton of water. 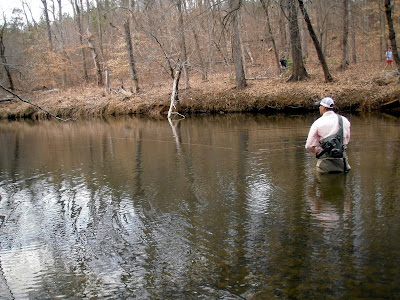 A buddy fishing a different section caught a few pickerel himself but the strange thing was we saw no other fish. No bluegill, bass, carp, catfish nothing. It was really strange. A guy hiking said the creek is really good and has some big fish. It was hard to believe. Mostly because the creek has few pools deeper than 2 1/2 feet. Either way I'll be back to sight fish. It was a great day and a good sign that spring is almost here.
Posted by Feather Chucker at 3:50 PM