Some friends invited me to go fishing with them on Wilson Creek yesterday. I have heard a lot about this creek but never had a chance to fish it. It was going to be new to all of us. There was high expectations as our group received detailed instructions of specific fishing spots and flies. The weather had warmed up some from how its been recently. There was still reminants of snow on the sides of the road. We drove past the hatchery supported section and decided to try our luck on the delayed harvest water. As we were gearing up it started to rain. The clouds didn't show any signs of it lightening up. We made the best of it and got ready to head down to the creek. 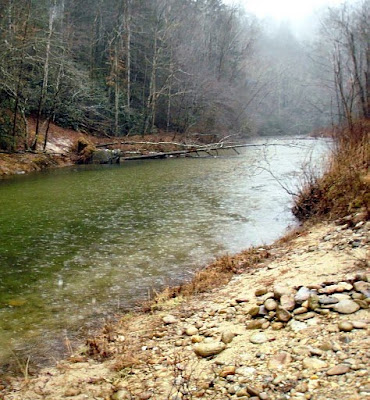 For the amount of rain that was coming down the water was really clear. Usually it becomes murky from run off. The rain made it difficult to see the bottom but when it stopped you could make out ever rock and feature. I couldn't see any fish at first. As I walked around and got my fish vision back I started to see more. There was a lot of fish in this creek. They didn't act dumb like stocked fish, even though they were. I tried different wooly buggers and only got a few follows on a olive one. I worked different areas for awhile then went over to talk to a buddy who was doing pretty well. 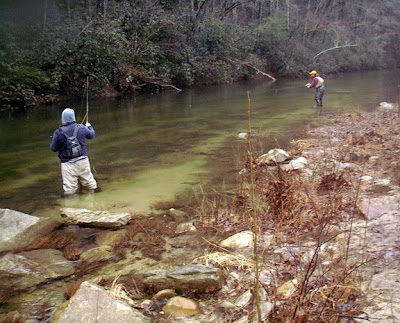 He showed me the rig he was using and gave me a different kind of indicator. The flies he was using was an egg pattern with a sz16 pheasant tail as a dropper. That set up made all the difference. Literally, five minutes after I set up my line I caught 2 fish. I continued to miss some fish and hook a few here and there. The suprise of the day was hooking up with a big brook. I was pretty far out in the stream and I think he thought I was a rock because he swam towards me a few times while trying to run. I knew if I fought him much longer he might break off so during one of his swim by's I tried to net him. I missed the first time and he took off behind a rock, I was anticipating a snap of the line. Luckily he came back around the rock and swam at me again. I was able to net him up this time. It was a really nice fish, probaly 18inches and near 3lbs. 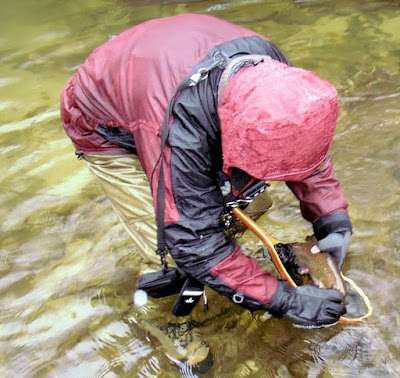 The fish did some barrel rolls in my net which made it really hard to get out. Its mouth was entangled in the net with the flies. I almost thought of just cutting the line. I eventually got him loose and he was released unharmed. I got a pic before letting him go. 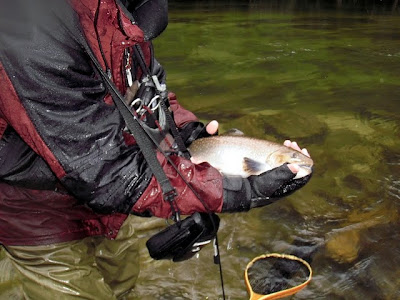 When fishing you never really worry about things until something unexpected happens, about 5min after catching the brook, I slipped on a rock and took a swim. I din't go all the way under water but I pretty much did a dog paddle and kept my head above the water. When I got my feet back under me, water had gone in my jacket and down my waders. It was in the mid 40's outside and raining. No place really to dry off except back at the car. I've read many stories of hypothermia and I didn't want to be in one of them. I got my friends keys and went back to the car and assessed the situation. I knew my day of fishing might be over. When I got to the car and stripped off my soaked jacked I realized my chest waders had protected most of my core. The water that got in came in through the neck of my jacket. My left arm was pretty wet too. I had decided to wear two shells that day. I think that really helped. I wasn't freezing or really cold. I hung out at the car for awhile then realized I was gonna live. Put my freezing wet jacket back on and soaked gloves. with in 30min I was feeling totally fine and warm.

The fishing slowed down but the rain picked up. It was kind of miserable at times. You couldn't get comfortable. The rain would slow down you'd start to feel warm then it would start pouring. It didn't matter what you were wearing you were gonna get soaked. Even with the gray and rain the river had some awesome scenery. 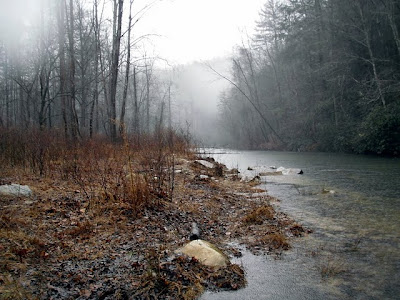 The rain finally chased us off but not after a good day of fishing. I had a great time with the guys I went with. On the way home we were planning our next trip. I look forward to many other trips and shared stories. Hopefully with less swimming on my part.

This trip was a chance to try my new Olympus WP550 waterproof camera. I was really impressed with how it filmed underwater. The bad part is in the rain you can't clean off the lens properly. Everything I had was soaked so there was nothing to use to wipe away the water drops on the lens. It still took decent pictures and I'm happy with the camera. Below is a movie I took of releasing a little rainbow.

Posted by Feather Chucker at 4:54 AM 3 comments:

Nothing really that exciting to report. I decided to do a fish log of everything I caught last year. That will help me focus on what I want to accomplish this year. I received some fishy gifts for Christmas. My bro-in-law hooked me up with some flies. I used some gift cards to get some other items. Pliers, magnetic net release for my net. I've been wanting that for about 2yrs. I never seem to have the right fishing attire for the summer so I picked up a breathable long sleeve shirt by redington. Looking forward to see how that works. The weather has been ridiculously cold. The highs have been in the low to mid 30's. I have not even thought about fishing. That's not true, I can't not think about it. Let's just say it hasn't been a priority. For now I'm reminiscing about last years trips which is fun and making my fish log.

I never realized it until looking back at last year, my first fish of 09 didn't come until April. I'm sure I caught some blue gill but my best catch was my first carp.

The catfishing really came on in the late summer. I was never really good at catching them on a fly. They seemed to become really aggressive this time of year.
7/2009
Trout, bluegill, catfish

In the heat of the summer the top water bass fishing really picks up.
9/2009
Lots of bass and gills.

The later the year got the less fishing I did, or logged at least. I think I did a lot of fishing at work and didn't write about it.
10/2009
Trout and gills

Wow, looking back I didn't do as much fishing as I thought. Never made it to the coast and didn't fish the Eno nearly as much as I wanted too. The Neuse was rarely hit and I don't think I fished the Haw at all. I didn't get a chance to go after Smallies at all in 2009. That is unacceptable. This year I have a few things to accomplish.

Looking at these most are kind of hard to accomplish without a personal water craft and some disposable income. I hope to have a few of these knocked off by the end of Summer.

In regaurds to climbing, I did a lot more than I thought I would last year . It was mostly pre summer but I'm happy with what I accomplished. This year I would like to hit Stone Mtn. I've never climbed it and the great arch looks like a fun climb. I'd also like get on Ship or Table Rock.