I have been wanting a kayak for quite a while.  I had a tandem kayak before my kids were born.  It was great to have but the main problem was storage.  The kayak was kept outside and exposed to the elements. When my wife became pregnant I sold the kayak to get funds to buy a nice camcorder.  I have wanted a boat since.   Often times I scoured craigslist for used kayak deals and even inquired often with in my fly fishing club.   There was never a deal that matched my budget or the kind of kayak I was looking for.  A friend was selling a pontoon style float tube.  I was interested but when researching reviews of the rig I found info on regular belly boat style float tubes.  I also stumbled upon the float tube fishing forum.  I was amazed at how tricked out a float tube could get.  These guys also use the tubes in almost any situation.  I checked out Sierra Trading post and found a deal where I could get a U-style Caddis float tube and fins for under $100.  I had a Caddis traditional round style tube maybe 15yrs ago.  I never used it that often because I didn't have many friends to fish with.  Luckily that is not an issue now days and yesterday I broke the tube out for her maiden voyage. 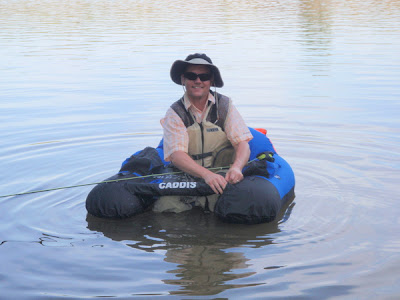 Some friends and I hit Jordan Lake. I was a little hesitant at first. The forecast called for 100 degree weather. I was worried about cooking myself with the 80degree water wearing my waders and a PFD. I probably could have wet waded by I was sketchy about this lakes water quality. We all headed out and I remembered quickly one quirky thing about float tubes and using fins. Which way do you pedal your feet? There is a definite trick to it and finding the right rhythm and technique takes time. I found if I back pedaled I moved quickly but it was tiring. If I forward kicked it was less tiring but I barely moved at all. I found through out the day I did a combo of both. I have to say once I got into a groove I really enjoyed the float tube a lot. It's not fast but the advantage is maneuverability. The water actually felt cool around my waders and it was interesting to feel the temperature changes. We headed into a creek that entered the lake and the water temp had to have dropped 10degrees. 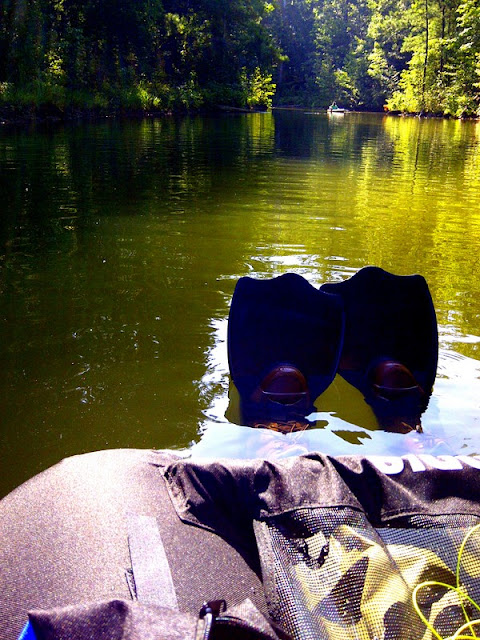 We tried this area for awhile. I could see bubbles rising from either turtles or carp. The water was too dingy to really see. The situation made me really wish I had a fish finder. It would have been nice to know what structure and contours were underneath. The fishing wasn't very good but honestly I was having fun just getting used to how the tube handled. If you just sat and enjoyed the view it was very relaxing.  I often times just bobbed with the current and watched ospreys and turkey vultures fly around. 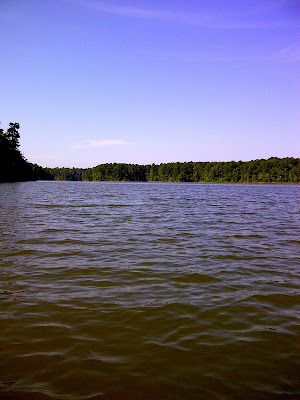 I can see that I might use this for just messing around and taking pictures. After a couple hours my ankles were getting pretty worked from paddling.   My buddy was able to give me a tow back with his rig. 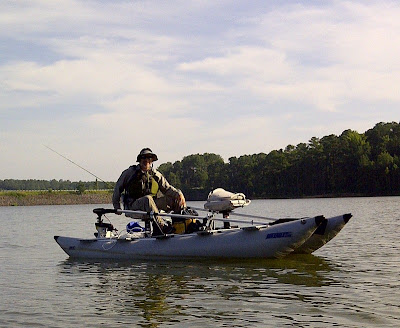 I'm really looking forward to using this boat more. I've been researching fish finders and I've found one that interests me quite a bit. Mainly because of its cost and functionality. 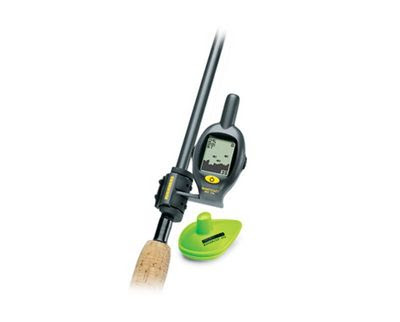 This is called the Humminbird Smartcast. You attach the receiver to a fishing pole and you can literally cast the transducer out. Then reel it in and get a over view of what the bottom is like. It reads temperature, bottom features and fish. I thought it would be cool to put it on a spinning rod and just let it drag behind the tube. I could also cast it out in various places to see if they are worth fishing. I think it would be a fun toy if nothing else. If someone has tried this please comment on it.
Posted by Feather Chucker at 10:07 AM 4 comments:

Just Not in the Cards

I tried to find a way to get on the water in the last couple weeks.  It has been rough.  I have been super busy at work and the triangle has had record temperatures.  When it's 105 with a heat index of 111 your first thought isn't to go fishing.  This weekend I went to the mtns only to have it rain at every spot I tried.  The water was muddy and washed out.  I made useless attempts at one place that was good to me last year.  All I had to show for my efforts was a small rock bass.

I'm still trying to figure out how to balance fishing time with family time.  It's really tough when you are away from trout water then go to a relatives house in the heart of prime smallmouth and trout water then are expected to be around all the time.  It's like planning to go shopping and having a pocket full of money only to be stuck outside looking through the window at all the stuff you'd like to buy.   The struggle to find what is selfish and what is allowed to forefill my own happiness seems like it will always be a challenge.

What I've come to realize from these scenarios is a plan and schedule needs to be set in stone before hand to make all the parties involved happy.  I have to set aside a block of time to fish at least one day and stick to it.  No matter what the weather conditions, who can fish with me or what I might miss out on.  I guess I'm happy as long as I don't feel I missed out on the fishing.