I never got a chance to get out to the river. I went to Wilmington this last weekend. Had a great time but didn't catch any fish. I'm going to try to hit the Neuse this week. I heard from a guy who knows a guy. That the fish are still coming up the Neuse and are pretty far away from Raleigh still. We'll see. I'm keeping my hopes up. I might not be able to try until I get back from San Diego. Which will be the second week of April.
Posted by Feather Chucker at 5:58 PM No comments:

The Quest for Shad 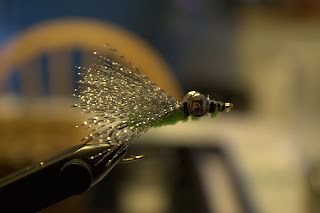 Ever since I've moved to Raleigh I've heard about this fish that swims all the way from the ocean up into the nearby rivers and small creeks in the surrounding area. They call them the Southern Salmon or poor mans tarpon. More commonly known as just "shad". They can get up to 5lbs and are supposedly really fun to catch. I wouldn't know. I've been trying to catch these things for 2yrs. I've been reading about them and from what I've found your best bet is to have a boat and to fish up near Weldon on the Roanoke River. They also come to the Tar River and Neuse that flows from Raleigh's, Falls Lake.

This year I decided to really target them. The hot season for the shad run is in March, I recently finished my first fly tying class and I've found some flies that are supposedly great for shad. I tied some up and went out to a small creek near Tarboro. It had just rained a couple days before and the water was really high. I heard from a local that it was about 4ft higher then normal. Needless to say I was skunked. I really wanted to avoid driving anywhere far from Raleigh. My family has planned a small vacation and I'm leaving for the west coast in a couple weeks so time is shrinking on me. I tried again last weekend on the Neuse right down from the dam. 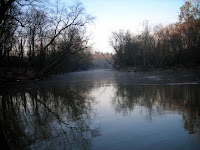 Again I was skunked. The weather was beautiful and I read reports of people catching shad in Weldon and the lower Neuse where it hits the sound and goes into the ocean. I think maybe it is still early. I'm going to try to coerce my brother-in-law into going fishing with me probably the last time I'll have this Saturday. The last shad attempt. I've found a stretch of the Neuse that they have to go by. Unless we get a torrential down poor. It could happen, rain is in the forecast for tonight. Either way I want to try. This has been the hardest fish to catch, and what makes it worse is to hear the stories and reports of other people catching up to 30-40 fish. 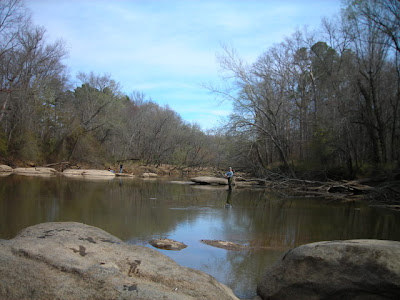 We'll see what happens this weekend, my fly arsenal is listed below. I will definitely update the site with pics, whether I finally get a shad or come home empty handed. 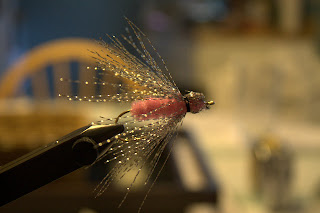 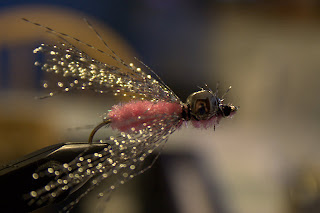 Posted by Feather Chucker at 12:23 PM No comments:

I think fisherman use a different measurement system then everyone else in the world. You will see someone catch a fish, ask them how big it was only to get a answer that seems exaggerated. There’s one number in particular that reigns top of the list in North Carolina. When I first moved to Watauga County I started fishing close to town. I fished this one section pretty regularly and never caught anything over 12inches. I talked to a guy one day who said he caught a fish that was 26inches from the same area where I had fished many times before. I never doubted it and continued to fish the water vigorously for a month or so. Still, I never caught anything over 12inches. As I became more familiar with people and places, I started to ask around to find the best fishing spots. Again this 26inch figure came up. There was a creek north about 30miles where supposedly 26inch fish are caught all the time. I fished it and the water was only about 2ft deep in the deepest places. I couldn’t see how a fish over even 20inches could live there very long. I figured maybe in its hay day there were huge fish there.

I started to really fish the whole area around the county. Meeting fisherman and it seemed whenever someone wanted to tell me about a big fish they caught that day or ever, it was 26inches. I started to want to laugh whenever someone said that number it was so funny to me that these big fish were always 26inches. Not 30 not 25 but 26. It really made me question the actual size. Especially when I’ve seen many anglers catch a fish right in front of me and tell me it was at least a 15inch fish when maybe it was 10inches. The reason I bring this up is there are many thoughts about what makes a good fisherman. Some people believe it’s how many fish you catch; others believe it’s how many BIG fish you catch. Whatever you believe is your opinion. I personally believe a great fisherman is someone who can CATCH fish in any conditions. Some have told me the size exaggeration comes from the stereotype that all fishermen are storytellers and should exaggerate. I never liked that theory. I started to call out everyone who made these claims of 26inch fish asking for pictures or did you measure it with a tape? This offended too many people. No one wants to be called a liar especially not someone from the south. Regardless, most people could never give me good evidence of how they got this 26inch measurement. I figure people catch a big fish and the adrenaline is running, it’s probably the biggest fish they ever caught. They start thinking about other stories of people catching huge fish and describing it to them. Then they think this fish is probably at least that big. So it’s probably 26inches. Or others believe no one will believe 30inches and 26 sounds better then 22. My advice is marking your rod where certain measurements are. 15inches up from the butt make a mark. Then make another one 20inches and so on. Then you can just lay your rod next to the fish and know right away how big it is. Don’t be one of those guys telling the tale of the old 26incher. Nothing is worse then telling someone a story only to see the expression of disbelief come over their face.
Posted by Feather Chucker at 7:07 PM 1 comment: 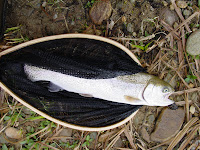