The club recently had presentation on striper fishing. Myself and some of the other members decided to plan a trip. One of the go to flies is called a tutti-fruity. The recipe is:

I had everything but the chartreuse bucktail. I decided to try some doll hair mixed with white bucktail. I like the results I just have no idea how it will fish. 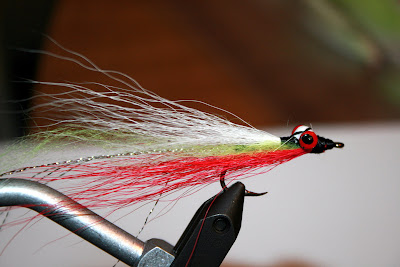 I kind of like this mottled version too. I really like the chartreuse doll hair in the fly I just wonder how well it will work in the water. 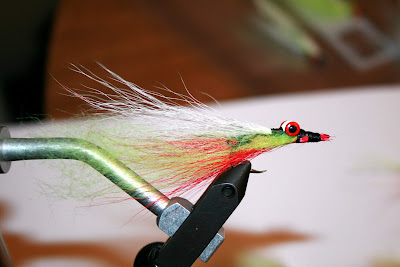 I liked the material so much I decided to try a gatorade clouser type fly and a deceiver type. 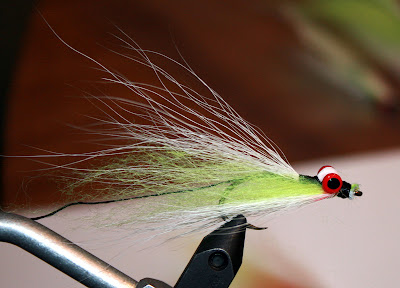 You'd think I'd dress up the flies some and just take pictures of the good ones. I really hate tying and these are about as good as it's gonna get. The black thread in one of the flies I figured could work as a lateral line. I might just cut it out. Depends if it works. 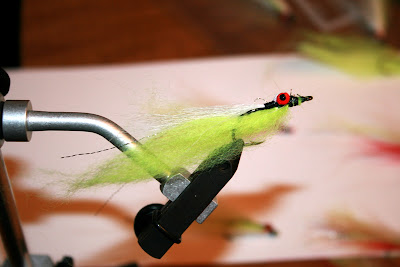 I think I have a good batch to get started. 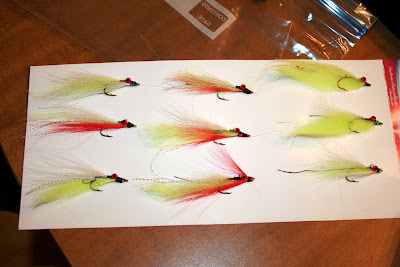 The trip is planned for Nov 11. Until then I'm going to mess around and see what I can tie. I'll probably do more traditional patterns after these.
Posted by Feather Chucker at 5:11 PM 2 comments:

Last weekend reminded me that fishing trips never go exactly how you expect. The mountains can be tricking so figuring out what you're going to pack can be a challenge. It can be 70 degrees one day then snowing the next. The weather report showed the highs in the 70's which usually meant it was gonna be chilly in the shade but nice in the sun. The weather turned out to be perfect. So nice in fact that I could have worn shorts all weekend. Of course I didn't pack any. The drive up was in the late evening and the trees looked as though they had already peaked with their fall colors.
The next morning we were happy to see that wasn't the case. 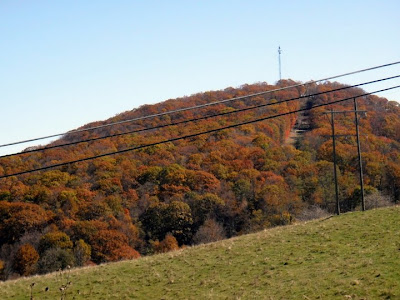 It's really hard to get the colors of the trees. I forgot to bring my better camera that has a polarized lens. I think that is the only way to capture the true colors of how beautiful the trees are. You can see the difference if you wear polarized glasses and take them on and off. The trees look kind of dull without them. Since the weather was so nice the family decided to take a few hikes and take in the scenery. 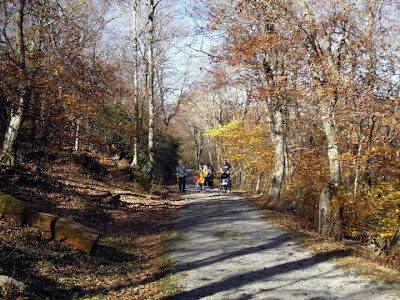 My daughter loves hiking and spending time with her cousins. I tried to get a shot of some of the leaves behind her and my wife. 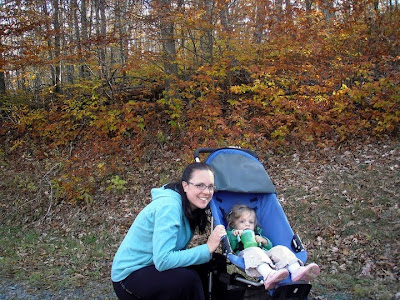 My daughter can only ride in the stroller for so long. Eventually she gets restless and has to hike on her own. Near the top of the mountain we were able to find wooly worms. There is a superstition about their coloring. 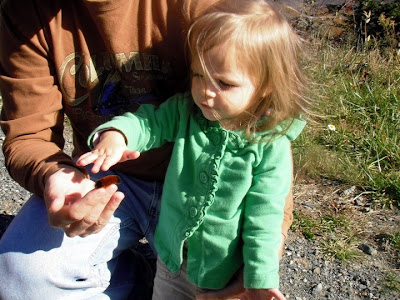 The more black they have in the front determines how bad of a winter we're going to have. According to this guy we're gonna have a cold start to winter then a nice stretch and a cold ending. 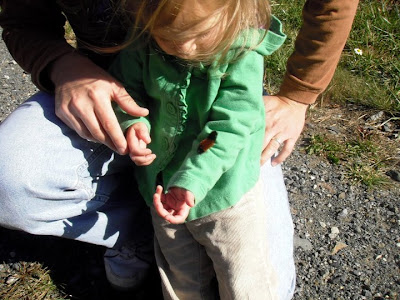 Eventually, I couldn't stand it anymore and I had to hit some trout water. First, I went to one of my favorite stretches. The water was really low. I looked for signs of fish in the water. In certain places that were usually a few feet deep it was now just inches of water. Even with most of my concentration on fishing I kept getting distracted by the trees. 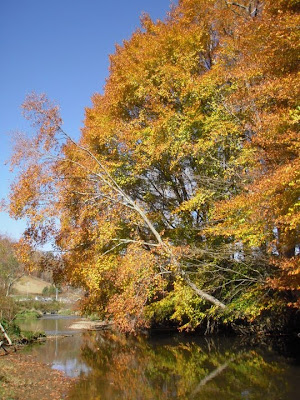 I tied on an egg pattern first and worked the deep pools I could find. I'd see a flash every once in awhile but nothing seemed to stick. I changed up to a softhackle dropped off a thingamabobber. On my next two casts I saw the indicator twitch and finally go under. The fish on the other end couldn't have been more than 4inches. As I brought it to hand I noticed it was a creek chub. These fish are everywhere in the New River. They will hit dries and nymphs and can become a nuisance. I started to move fast and work as much water as quickly as I could. Almost every decent spot I fished yielded a chub. Many of them were larger than any I had caught previously. I still wanted a trout. The features of the river had totally changed. The last time I visited this stretch was in August. In just a couple months the water had dropped a couple feet and a lot of structure was just gone. It was tough fishing. The water was so low my profile was high above the water. I didn't feel like stealth fishing and crouching down. I spooked a few browns but it didn't bother me that much. Mainly because there seemed to be only one fish in a general area. My favorite stretch had now become a chub factory. I covered a ton of water and around every turn I was more discouraged with the conditions. I decided to leave and try a Delayed Harvest Section. 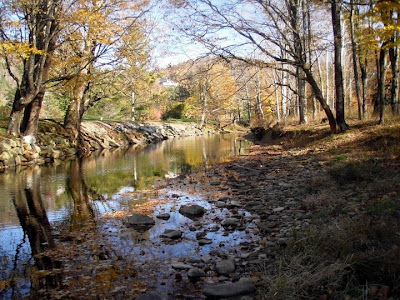 The Watauga has always been good to me. This river sees a ton of pressure. It had been a few weeks since the last stocking. That usually meant clever and spooky fish. The river is very scenic and fallen leaves outlined the banks. I was losing daylight and fished quickly. First I started with a white wooly bugger. I had some follows and slashes at the fly but I couldn't hook fish. I kept moving and figured I'd get to a certain point then head back and fish a nymph under a indicator. The nymph worked and I was able to hook a rainbow in a riffle that curved around a rock. The fish hit the nymph so hard there really wasn't any technique to catching it. 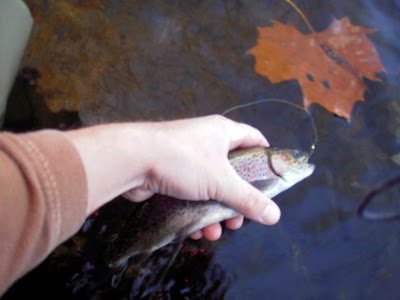 The next fish took a little more finesse. There were a ton of leaves falling and many times you'd have to clear your line from drifting leaves. My indicator would stop on them all the time. I was in a calm section with hardly any flow and right near a leaf the indicator stopped. I pulled up on it and instead of the indicator coming towards me, it went under water. Now here's where experience comes into play. That's not right, if you lift up your line your indicator should come towards you up out of the water. What happens many times in the rhythm of fishing two things will happen simultaneously and your next decision will decide whether or not you catch a fish. If I sat there and just figured my eyes were playing tricks on me I would have missed the next little bob of my indicator. Knowing better I held the line firm and when I saw the indicator give the slightest bob the second time I set the hook. It went under and like most stocked DH fish it didn't fight hard at first. Then as it got closer it decided to make a run for it. Of course I didn't have my net and this guy was just a little big to just grab.
I was able to just slide my hand down the leader and un-hook the fish. The light was fading and I decided to call it a day. It wasn't my best day of fishing but at least I got a chance to get out and wet a line.
Posted by Feather Chucker at 5:47 AM 1 comment: 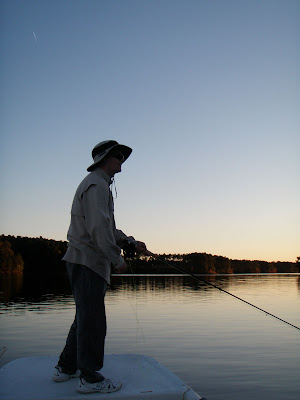 The plan today was to try to get the evening bite at Harris Lake. My friend John has a flats boat with a platform. I was hoping we could use the platform to sight fish for bass and carp. The weather couldn't have been better. 70 degrees not a cloud in the sky and hardly any wind. I tried a top water popper first and had a couple hits on my second cast. The strikes were not ferocious. I figured it was a bluegill or small bass. That was enough action to encourage me but that fizzled out after my next 100 casts yielded no results. We worked coves and ledges trying to find fishing holding on the drop offs under water. I switched from the frog type popper I was using to a clouser I created using just flashabou and peacock herl. With in five casts or so I had my first Harris Lake bass and the first fish I have caught using my 10wt. 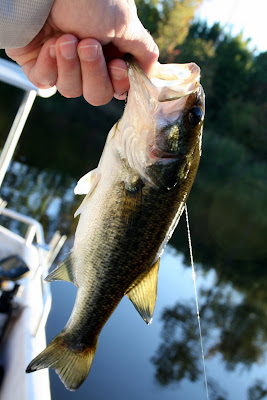 I recently bought an Albright 10wt and today was my first test run of how the rod would cast and fight fish. The rod doesn't cast as well as I'd like but with a price tag of $30, I can't complain. John kept working the surface with poppers and a gurgler minnow. I tried various clousers, poppers even the pole dancer. The fish just didn't want to cooperate. Even with the slow fishing the atmosphere on the lake was more than peaceful. The leaves are starting to change on the trees and we seemed to be the only boat on the water. 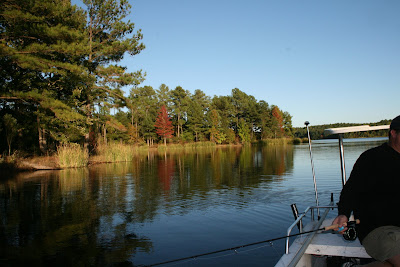 We kept fishing until Sunset. Even as the last glimmers of light shined above the trees we didn't see much surface activity. I'm starting to wonder if all these stories I've heard about aggressive fall bass is just a fisherman's rumor. I'm still waiting for my experience but until then I'll just have to enjoy boat rides on glass calm lakes and sunsets like this. 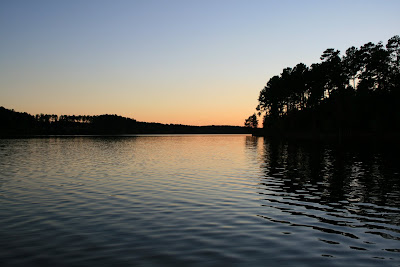 I have been in a fishing slump lately. I haven't gotten out much and when I do get out the quality of fishing isn't very good. I'm never out as long as I want to be the conditions are strange. I have plenty of excuses. The bottom line is I haven't had a good fishing trip in awhile. I might hit a lake with a friend this weekend and do some sight fishing for bass and carp. I'd definitely post a report. Until then I'll have to live vicariously through movies like this.