I have some friends that are somewhat new to fly fishing and I've been filling them in for months on how great the Eno is. They decided to accompany me this morning to see if the reputation is deserved. I tried going to a place that I went a few weeks ago. I couldn't find it and after a few twists and turns we ended up on a section I've never fished before. The parking lot was small and the place didn't look like it see's too much action. I wasn't sure if that was good or not. Jen headed down stream, while Claudia and I worked our way upstream. It wasn't long before small fish started to play with the flies. We were using poppers and I imagine the fish were small or they were fisherman wary bass. The bass in the Eno have a skill of swimming ever so gently up to your fly and kiss it with the slightest touch. I had a few decent hits but I couldn't seem to hook anything. As we moved up stream I saw a spot that looked promising, made my cast and had a fish take the fly almost simultaneously with it hitting the water. The water was so clear I couldn't tell if it was a fish or what. It was a strange view, it almost looked like my fly was being dragged around beneath the surface by an invisible force. I set the hook and saw a nice green flash. I figured it was a roanoke I became excited and really tried to work the fish. As it swam in front of me I could see the big blue mark on it's gill. The signal of a bluegill. My mind had a hard time processing this, because this fish was bigger than any bluegill I have caught before. As it came closer it seemed to get even bigger, it didn't fight that much until it was about a leader length away. Then it was a project landing the fish. I really needed a net. I usually don't catch anything that requires a net in the Eno but this was an exception. I finally wrapped my hand around the fish's gut and pulled it out of the water. It was a thing of beauty. 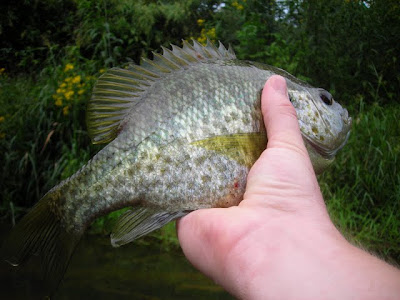 This was by far the biggest sunfish I had ever seen. It was a really healthy fish. 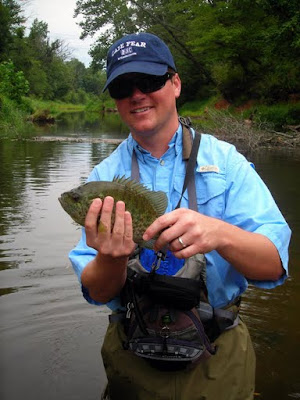 This fish was wide as it was tall 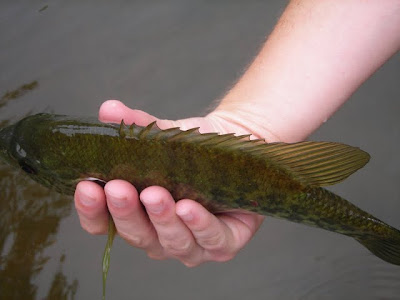 I did some research and found this fish is a red eared sunfish alos called a shellcracker. After releasing the fish I tried around the area where it was caught. Nothing else even sniffed my fly. Claudia and I decided to check on Jen. 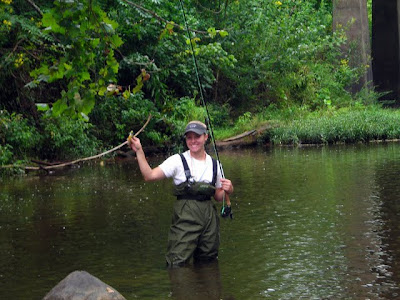 Right as we walked up Jen was pulling in a little sunfish. She had caught quite a few and found a honey hole. I had Claudia work the back of the hole to see if she would have luck there. It wasn't long until she had a sunfish of her own. 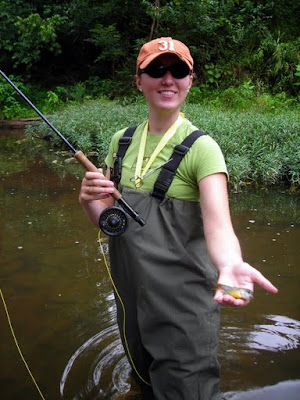 The fishing slowed down a lot. The water seemed to get shallower. I decided to be a good samaritan and pull and old raft upstream that was deflated and draped over a tree. While dragging it back I kept asking myself why I picked it up. The raft was really heavy and waterlogged. We all had a really good time exploring the area and catching some fish. The Eno never disappoints. This is probably my favorite place to fish in the Raleigh area. I'm going to hit this river again in a different spot next month.
Posted by Feather Chucker at 10:15 AM 2 comments:

Trying to Fish on Vacation...

My week of vacation first started out with me forgetting my pack at Lake Crabtree. I thought it was never going to see it again. I had to pick up my mother from the airport and the lake was on the way so I decided to swing by and see if I can get a miracle. Well god had one in store for me because as I walked to the waterfront I could see a blue through the grass of my fly box. I then saw my chest pack lying on the beach by the canoe launch. It was virtually out in the open and all of my gear was untouched. I decided to press my luck further and fish the same spot I had caught a catfish the day before. I lucked and hooked up with another cat using the same fly. I didn't have time to keep fishing I had to leave and pick up my mother, but it was a great day none the less. 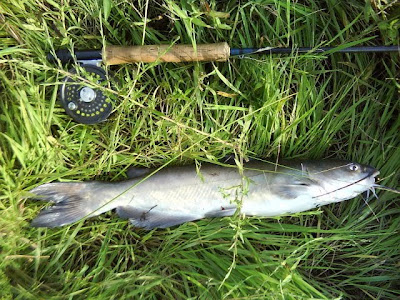 I went to Galax, VA to visit family and was able to check out the Little River and Little Stoney Creek. My cousin owns some land by the Little River. It is a beautiful section and my cousin said there are plenty of smallies and rock bass. 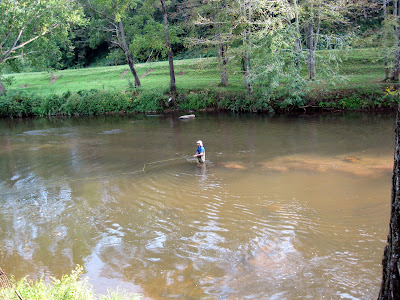 I got in the water and worked my way upstream. I had plenty of good chances and holes that looked promising but I didn't get any bites or see any action. Things got worse as a family decided to tube down the river right in next too me. I couldn't blame them, the day was amazing and if I could I have I would have done the same.

My mother, wife and I checked out Little Stoney the next day for a hike. Once we were a decent distance from the parking lot I started to work the water. 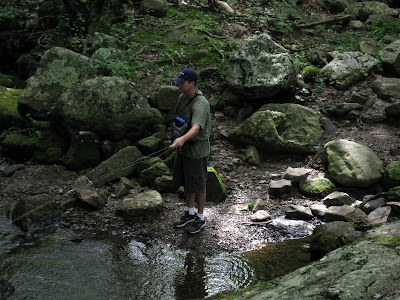 This was short lived. After about 10 casts I heard a loud thunder clap and I knew my time was limited. We made haste and went back to the car. I pretty much realized when on vacation with family the fishing opportunities are hard to accomplish. Time with family is more important but I was happy to get the short amount of time that I did on the water. I hope to hit the Eno next and have a report of catching a Roanoke Bass.
Posted by Feather Chucker at 2:37 PM No comments:

The carp have been shy lately. I haven't seen them in the pond by work in a month or so. I tried my luck today and was able to catch some gills and little bass. The gills were decent size a little bigger than my hand. 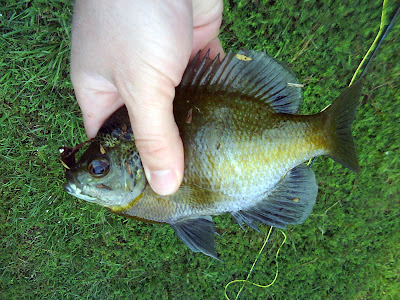 The picture really doesn't do it justice. The color on the gills out of this pond are beautiful. I think it's because the water is really clear.

Later I met a friend at Crabtree Lake, I had never fished there before. The water looked really good and you could see rises in all direction. I went with a popper first but didn't have much luck. I decided to try a big bead headed brown bugger. I worked one section then went to a nice eddy. After a few cast I latched onto this guy. 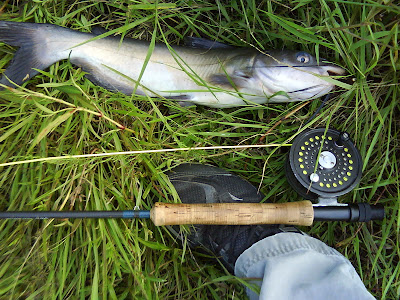 The take was pretty ferocious. The fly was only in the water for seconds before the fish hit it. I thought maybe it was a carp because it took line instantly. As I started to fight it more I realized it was a cat. The fish in this lake are supposedly unedible due to contamination from hazardous waste dumping in the past. I think this fish is a good indication the fish population might be bouncing back. It looks pretty healthy. 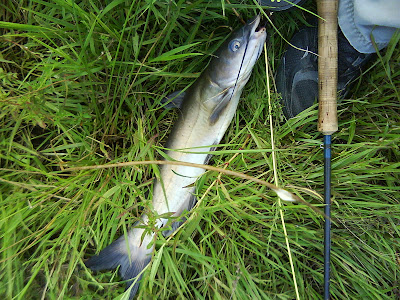 Posted by Feather Chucker at 5:25 PM No comments: 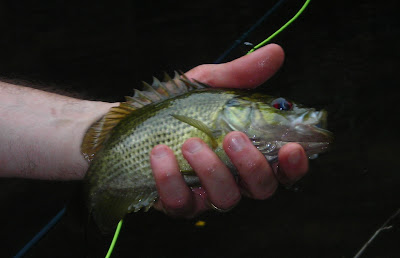 It's been over a year since I was at the Eno River. At the last Trout Unlimited meeting I had the chance to met Sam who lives on the river. He told me about some locations where he caught Roanoke Bass. I've been trying to catch one of these fish for awhile. I was pleasantly surprised when Sam invited me to fish with him. I jumped at the chance and looked forward to it all week. We headed out on an overcast morning and the weather was great for August. The temperature wasn't that bad, maybe in the mid 80's. The Eno looked just how I remembered, pretty similar to a mountain stream but has a style all its own 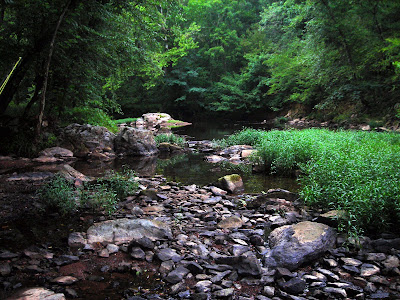 Sam gave me coordinates to where the Roanoke's were supposed to be. We decided to try some water he hadn't fished much first. We worked pockets here and there and it wasn't long until we caught probably the most prevalent fish in the Eno.. 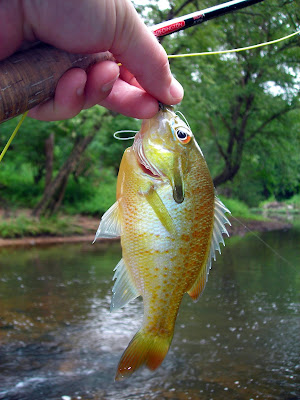 Sunfish never get boring, when you think you've seen the prettiest one you'll catch one even better looking on the next cast. This river has to be the best sunfish river in North Carolina. It is great for beginners. The fish are feisty and they almost always hit top water poppers. The action is exciting. We found one pool were I found a pod of sunfish under a tree. I caught a fish on almost every cast. The strikes varied from a sip, inhaling, to a rocket launch accompanied by water and a glimpse of fins as your fly disappears. As we waded there were tons of dragon and damsel flies. Minnows jumped here and there, probably escaping roaming bass. While working some of the pockets that Sam recommended I wasn't able to catch a Roanoke. I decided to take some pics of him fishing because often when you go fishing you never get pictures of yourself. 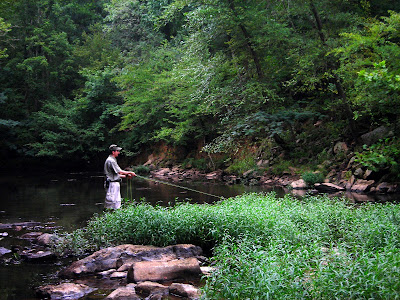 I went to tell him do some false casts so I could get some pics and in the middle of my comment.... 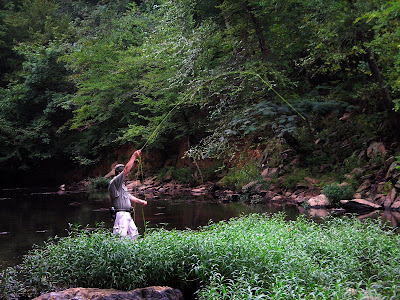 Fish On! After a few seconds Sam says "It's a Roanoke!". I couldn't believe it, I was just fishing in that same spot 5minutes before he got there. He was able to land the fish and show me what the fish looks like. 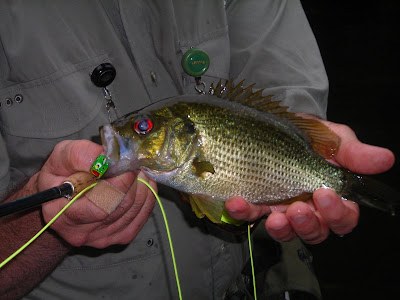 This was a nice fish and you could tell it had been eating well. The fish looked just like the rock bass I've seen in Virginia. I was really excited and eager to catch my first Roanoke but it was not in the cards for me. I was still happy to catch sunfish. The experience made me eager to get back and go for the Roanoke again. Sam is great fishing partner and I look forward to fishing with him again. On the hike back upstream, Sam almost stepped on a moving rock. 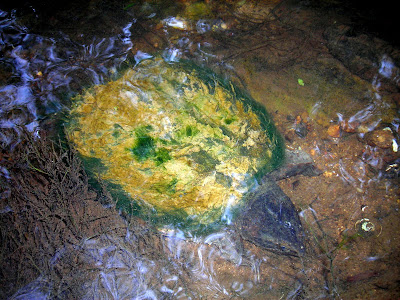 A good size snapping turtle. About the diameter of a basketball. Not something you'd want to annoy. That's the fun part about fishing you'll always see other wildlife, turtles, insects, birds you rarely see anywhere else. It's hard to come off the water after days like this. 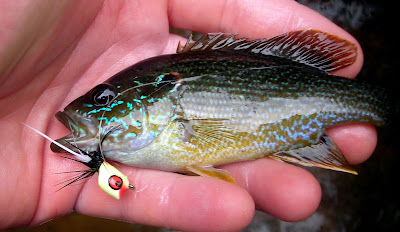 Posted by Feather Chucker at 9:41 AM No comments: