A Bunch Of Firsts

A few friends and I spent a weekend at a large freshwater lake in NC. It was my first time fishing the lake and I wasn't sure what to expect. The lake has a reputation for amazingly clear water and great bass fishing. The first-morning I got up before dawn and the conditions were perfect. 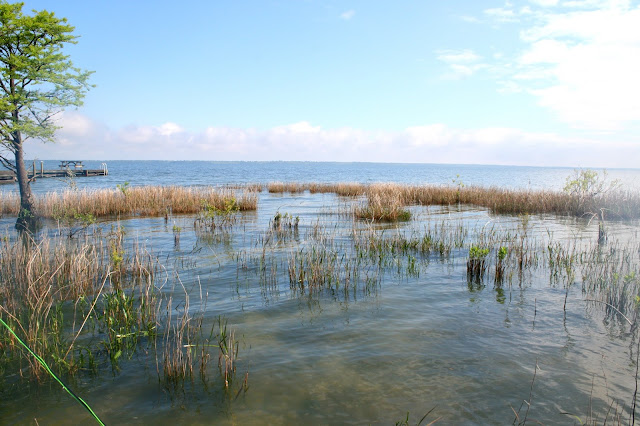 Glass calm and even though there was rain the night before the water wasn't murky. It took me awhile to start seeing fish. The color of the bottom was a light tan and my eyes were looking for dark shadows. What I found is the bass were lighter colored than I'm used to. They actually looked more like redfish under the water than bass. I was able to hook a few on a stealth bomber. I ran into one bass that seemed to not spook at all. I cast a clouser a few times and the fish didn't budge. As it started to swim away into deeper water I made one last cast in the direction the fish headed. When I started to take in the slack line I felt pressure and made a strip set. The water swirled and I couldn't believe I had hooked the fish. There was some not quite right about this bass. When the fish got closer I realized it wasn't a bass at all. It was a bowfin and the hook was barely in its lip. 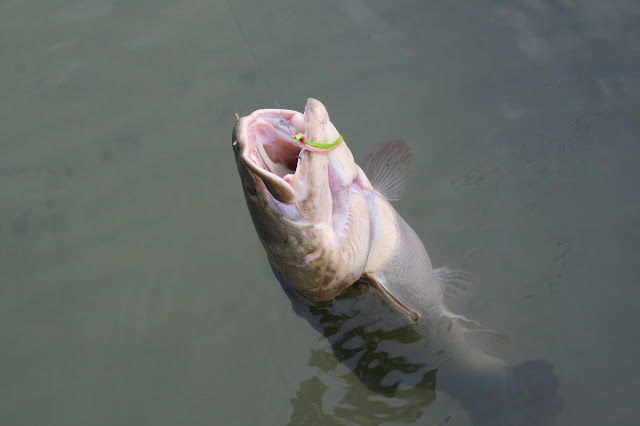 All I have ever heard about bowfin is how hard they fight. I was able to get the fish to the kayak but I didn't have any grippers or anything to lip the fish. A bowfin's mouth is lined with small needle-like teeth. 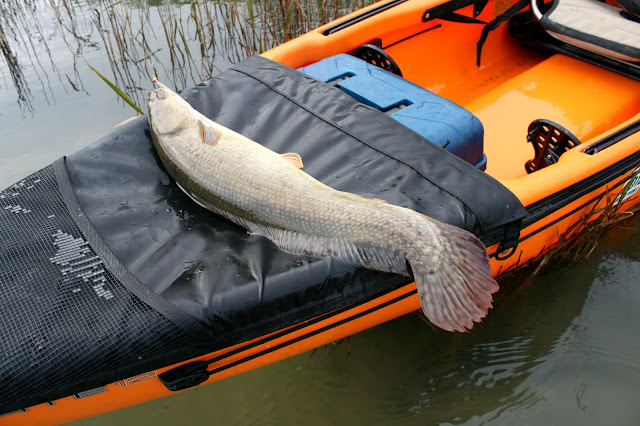 Against my better judgment, I grabbed the fly and moved the fish. The bowfin didn't want to give up and it took several tries to get it calmed down. My weekend was made. This fish was well over 22 inches and qualifies for an NC citation. It swam away as though it was never caught.

The fishing slowed down after that until I saw some activity. Water splashed every now and then between the weeds and wakes would move the blades of grass. Something was obviously chasing bait in the shallows. I waited until I saw a splash and cast a popper in the area. A mouth opened and inhaled the fly seconds after it landed. It was a nice bass and it tangled itself in the weeds. The water was so shallow I was able to get it free. 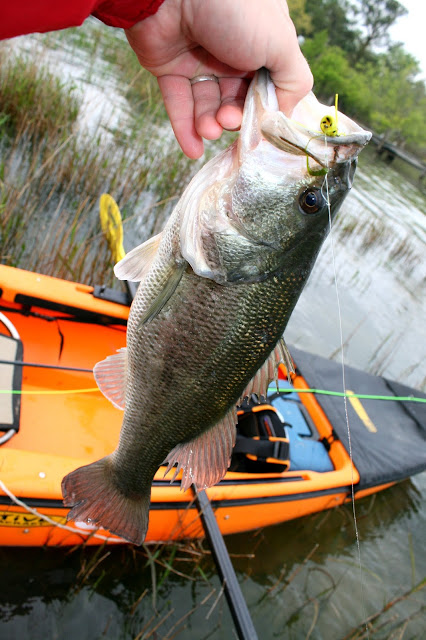 A few casts later I had my first pumpkinseed. 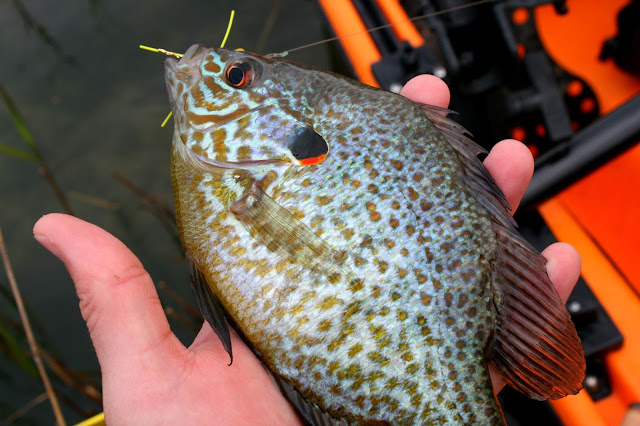 The coloring on this fish was striking. I have seen pictures of pumpkinseeds but never caught one. The markings on the face are beautiful. 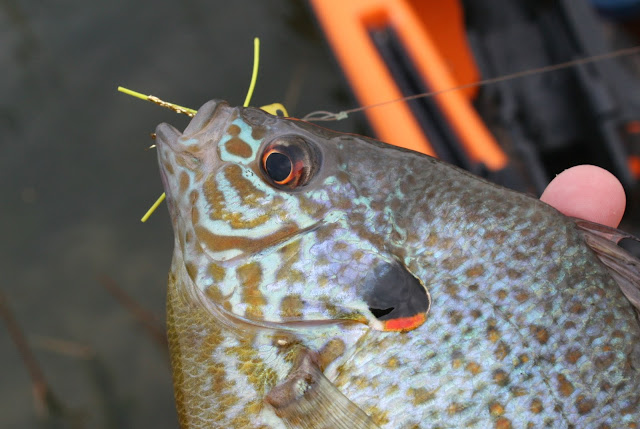 In the same area, this yellow perch came to hand a couple casts later. 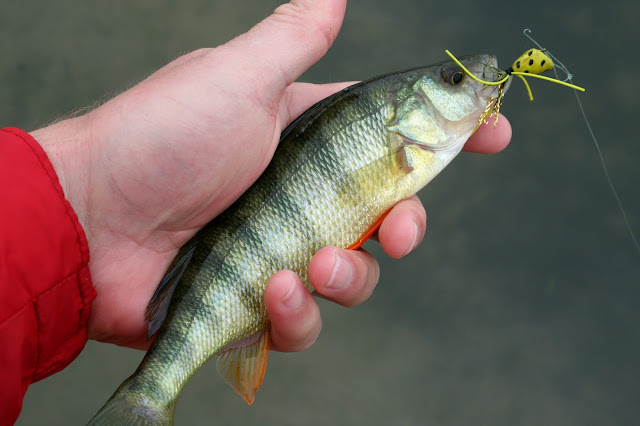 It was a great morning. Later my friends and I took a trip to the other side of the lake. It was a huge contrast from the south side. Instead of light colored sand, the bottom was dark green and you could not see the banks through the cypress trees. 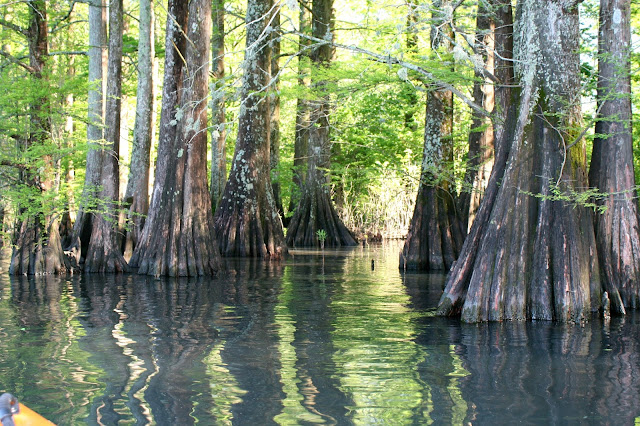 We found an area that had a mixture of grass and trees. 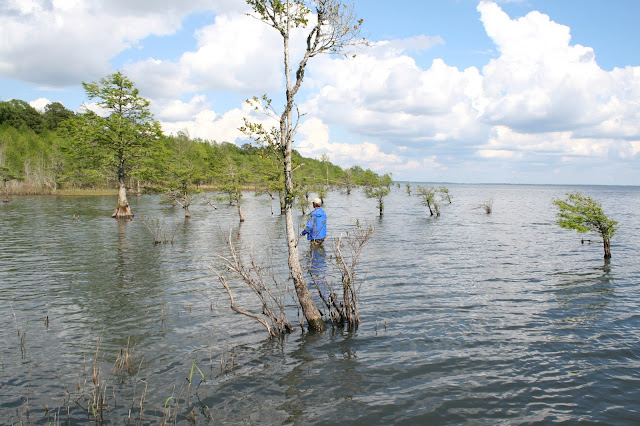 The wind started to pick up and we decided to make the trip back across the lake. This is where things got interesting. 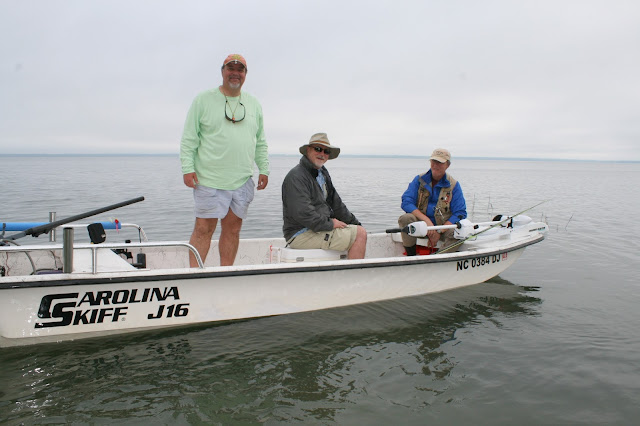 The sky started to get very dark and storm clouds moved across the horizon with gale force winds. This lake is shallow, the average depth is 4ft. When the winds pick up the lake acts like a wave machine. We had 2-3ft waves all around and several came close to coming over the bow. The boat couldn't get speed with the rough water and we had to surf the waves more than go through them. The trek across the lake was spooky and the view at the dock wasn't any better. There was lightning and thunder at our backs. The plan was to leave the boat tied up and run to shelter. Breakers prevented us from doing this. The boat could smash into the dock and be destroyed. 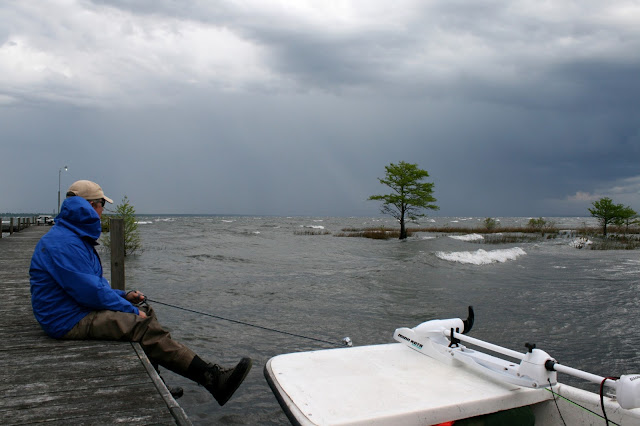 The next plan was to load the boat on the truck until the storm subsided. 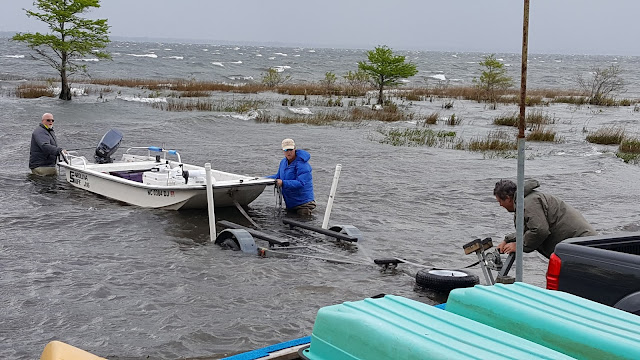 The boat and ourselves got out of the water unscathed. It was a scary experience and a reminder that nature is always in control. The wind continued through the weekend and made fishing tough. It was still a great trip and I'm already planning my next trip back.
Posted by Feather Chucker at 4:37 AM 14 comments:

Email ThisBlogThis!Share to TwitterShare to FacebookShare to Pinterest
Labels: bowfin on the fly, fly fishing for largemouth, Largemouth

Stressing Before A Fishing Trip 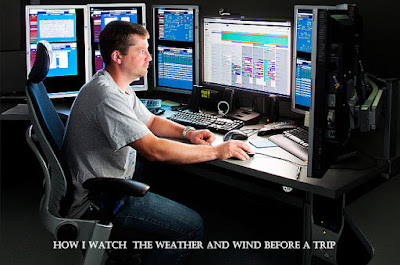 Ok, the picture might be a slight exaggeration. I was already obsessed with checking the weather before I had a kayak. My Native doesn't love the wind so I always have one eye on WindFinder. If you've never checked the site before it's pretty good. I've found it gives accurate wind forecasts for the lakes I usually fish. There is also a free app you can get for your phone. I like the mobile app more than the website.

Posted by Feather Chucker at 6:16 AM 3 comments:

As much as I like catching fish I enjoy sharing spots with friends. Joey and I hit a crappie hole that has been good to me lately. I had him go with a fly color I hadn't tried yet. It was basically a red wooly bugger. Several casts in he hooked this beast. 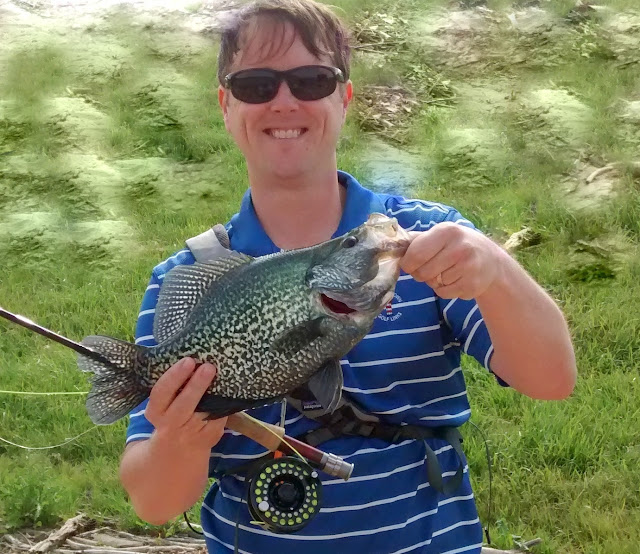 It was a trophy crappie and gave him a good fight. I was wondering what was taking him so long to bring the fish in. He thought it was a catfish at first. When I saw the fish I didn't think it was that big until it turned onto its side. The thing was almost as tall as it was long.
Posted by Feather Chucker at 10:23 AM 8 comments:

I've stopped trying to figure crappie out. Over time I've figured out their patterns at a certain lake. I go there when I think they should be there. It works out most of the time. Today this was the only crappie I caught and it inhaled the fly. So deep the hook was embedded in the gills. 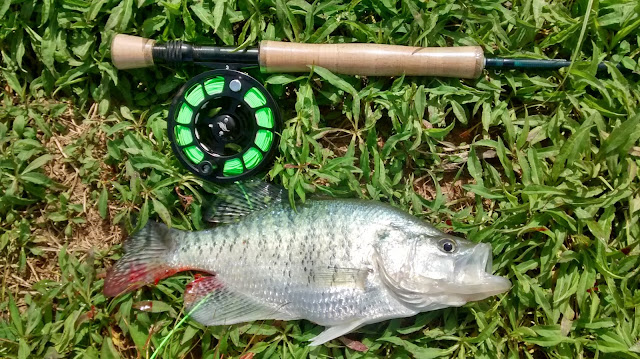 I was able to get the fly out and the fish seemed to stop bleeding before I released it. It swam away fine but I never feel great releasing a fish I question will make it. Crappie are interesting fish. They have the body of a panfish and the mouth of a largemouth. Even though the mouth is quite large it is fragile and you can easily pull a hook free if you lip snag a fish.
Posted by Feather Chucker at 9:45 AM 5 comments: 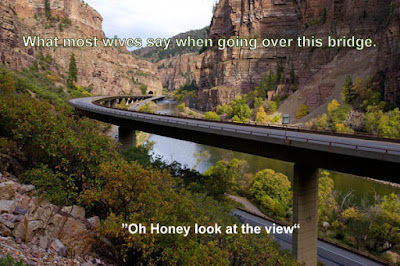 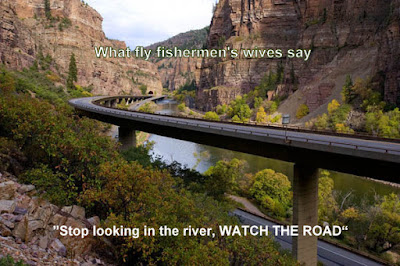 I can't drive over or next to any piece of water without being curious if there's fish there. I have never gotten into an accident because of the distraction but I have done some dumb things.

When I see pictures like this I always think maybe it was just another guy wondering if there was fish in the river. 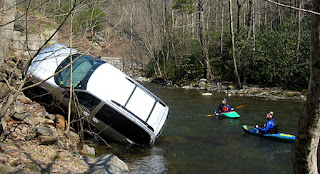 I first ran across Andrea Larko's Art in Dun Magazine. Her style is unique and has a tribal look to it. She sells prints, decals and apparel on her Etsy site.

I decided to get a couple decals for my kayak. 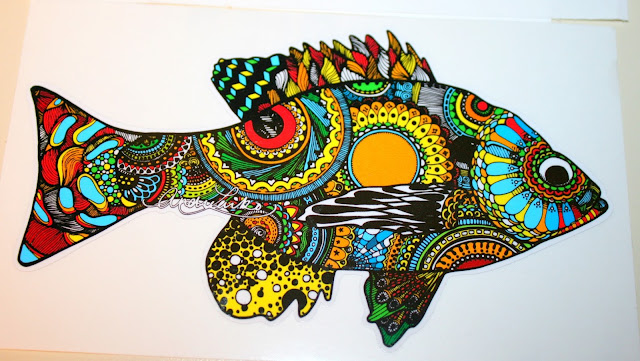 I really love the colors on this bluegill. 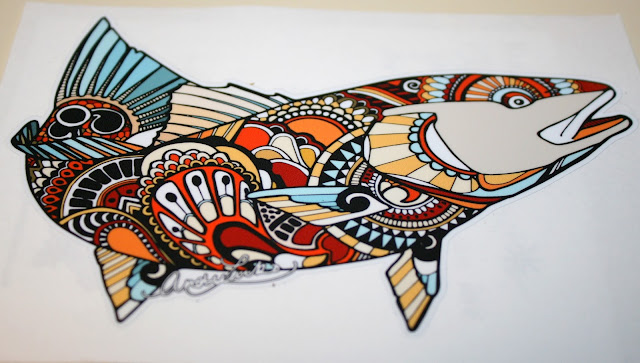 The redfish is just as awesome. My wife saw the decals and now she's interested in getting some of Andrea's art for the house. The hard part is deciding what to get. There are so many good looking designs.

Andrea adds a nice touch by hand writing thank you notes with each order. 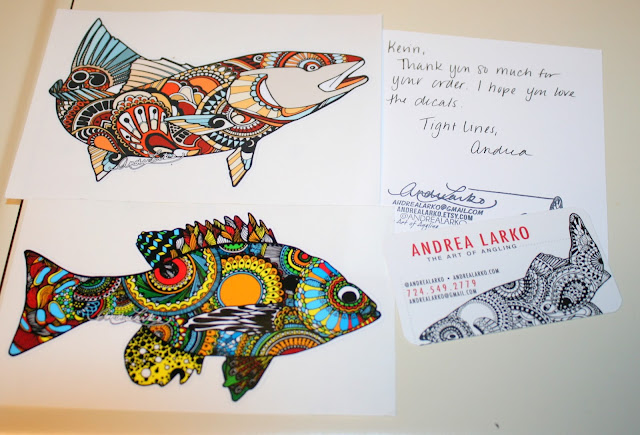 I have seen this done on Instagram with several of her orders. I believe Andrea really appreciates people finding something special in her art.

Over time I've accumulated a stash of flies that aren't fish worthy anymore but I'd still like the hooks. 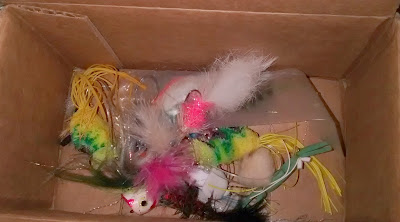 The hard part is figuring out an easy way to remove the material. I tried using a razor to cut the material off. This worked but it is very time-consuming and tedious. The next bright idea was to set the fly on fire. I figured the material would burn off and I'd be left with just a hook. I learned flies are very flammable and the fumes really stink up your house.

Does anyone know of an easy method to strip the material off your flies? I'm thinking about starting a fly subscription service. Instead of sending you 10 flies every month you send me 10 of yours and I'll take the material off. I think I'll call it Stripfly box. Although there would be a lot of explaining to do when significant others see a charge for strip fly on their bills.
Posted by Feather Chucker at 6:19 AM 12 comments:

I saw this thing at the last fly fishing show. I didn't buy it at that time but I received a coupon for a shop and picked it up. This thing is pretty neat and perfect for a canoe or kayak. The large roll is 10inches when rolled up and 16 inches when unrolled. I put it next to my wife's shoe so you can get an idea of the size. 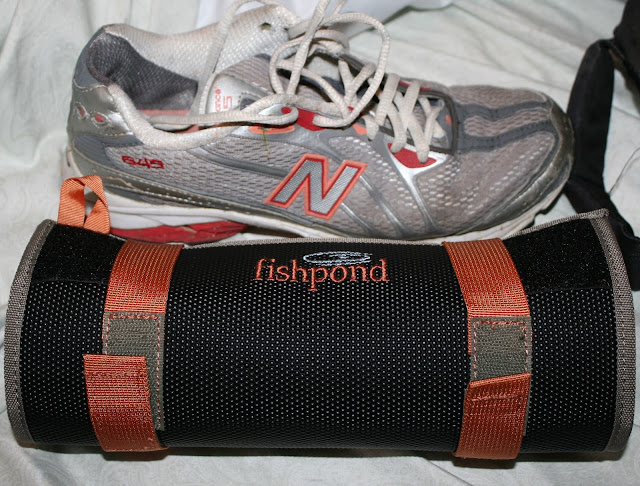 This lower picture shows the roll all the way open. I added large flies so you could see how much space there was. The largest flies are 6inches or more. You can see there is plenty of room for other flies above or below them. 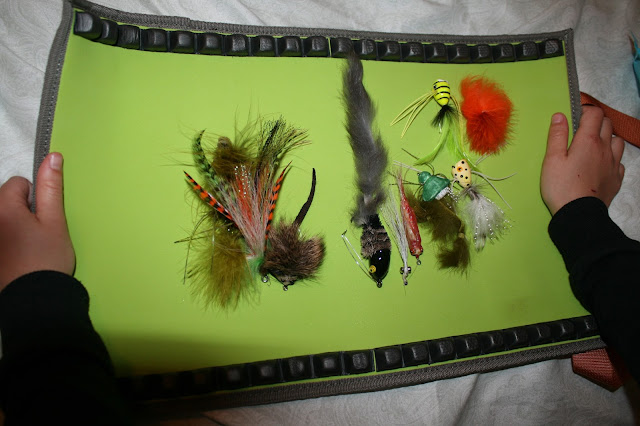 Another cool feature is the loop at the top that can be used to connect to a caribiner. The roll also comes with 4 velcro swatches. 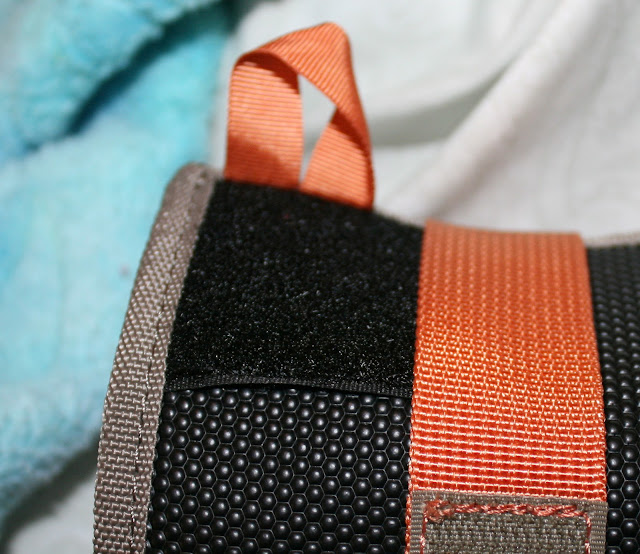 These can be placed anywhere on a boat or kayak so you can easily access the roll and put it away. If you're wondering if the flies get smashed when the sushi roll is closed there is foam that lines the outter edge. 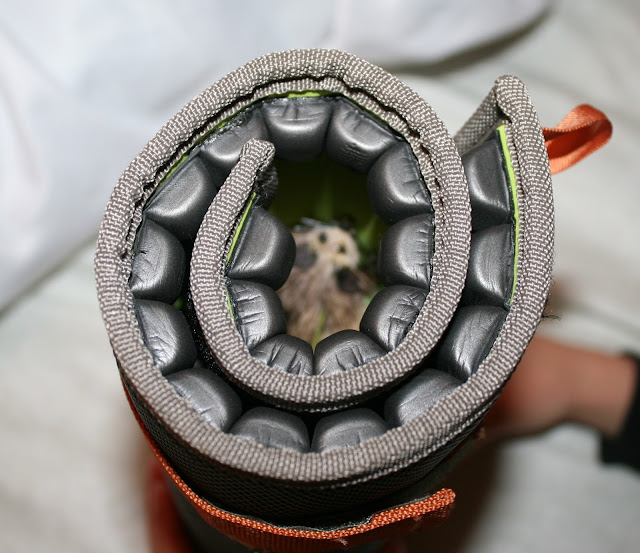 This creates just enough space so your fly material will not get smashed but gives the flies airflow so they can dry.

I'm really happy with the Sushi Roll so far. I like the portability of the unit as well as the amount of storage space. It has the same surface area as a large cliff box. I think the velcro part will be great for the kayak. I will be able to grab the flies and store them out of the way with ease. The product is a great value for $25.
Posted by Feather Chucker at 4:41 PM 7 comments: