A friend sent this to me this morning. I thought it was pretty good. The title is How Fishing Almost Destroyed my Childhood. Enjoy
Posted by Feather Chucker at 6:50 AM No comments:

The Neuse in November 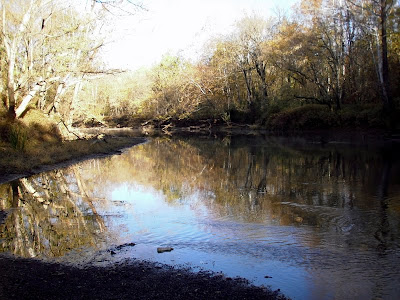 A friend who knows the Neuse like no other invited me to go fishing this weekend. The weather looked to be great and after warming ourselves with some coffee we hit the water. The conditions were my kind of fishing. The sun had warmed up the air the water was low and clear. Perfect for wading. 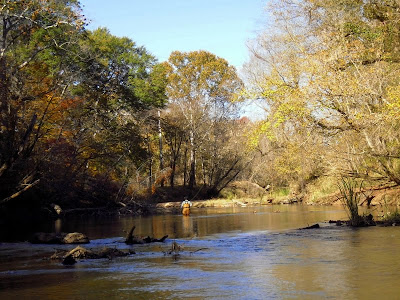 My friend had talked about using a new retrieve for bass. When he showed it to me I realized the way I fish for largemouth might be totally wrong. I had been using his so called new retrieve all year for bass. It was hit or miss. It was the same type of retrieve I use for striped bass.
Quick 4 inch strips with various pauses in between. I guess largemouth usually like a slower retrieve. The structure was perfect for holding fish. I went with a wooly bugger type pattern. I got some hits and eventually hooked a few fish. The hits were very subtle. As the temperature warmed up the fish became more aggressive.

Many times I would cast and before I even started stripping line a fish would be swimming away with my fly. By the time I brought them to hand the fish had engulfed the fly. 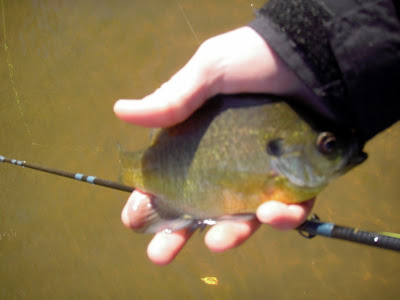 The fish were definitely trying to fatten up before winter. The gills inhaled the fly so deep a few times I had a hard time removing it. The fish seemed to be in eddies and the trick was to start stripping immediately after the fly hit the water. If there was a log, bounce the fly off of it or get as close as possible. The fish seemed to be just under or near cover. There was some surface activity and I thought about using a popper but I was doing well with streamers. All of the fish were bluegill except for a small bass. The gills were pretty fat and some had a nice color to them. The trees were also displaying their last bit of fall color. 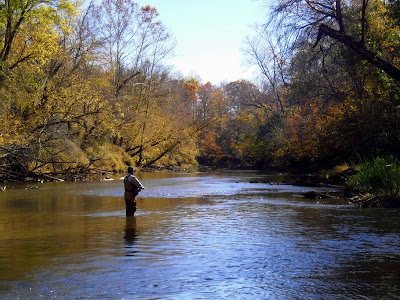 The morning was pretty perfect. Things went how they are supposed to go, or how I think they should go. The flies that are supposed work did, every fishy looking spot seemed to hold a few fish and I never had a random snag from a tree on the bank. It's been awhile since I have caught this many fish in a short amount of time. That is what's great about blue gill. They are aggressive and plentiful. Today, life if good. 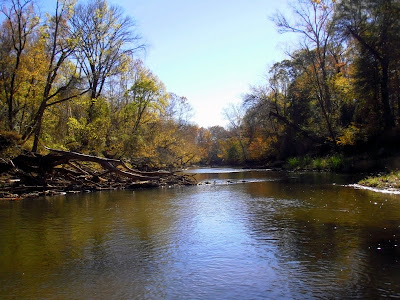 Email ThisBlogThis!Share to TwitterShare to FacebookShare to Pinterest
Labels: Bluegill, bluegill on the Neuse, Fly fishing the Neuse River, November on the Neuse

Fishing is always better with friends. This Veterans day some buddies and I got out and chased striped bass on Kerr Lake. This was going to be a first for all of us. We had fished for stripers before on the Roanoke but never targeted them in a lake. At the boat ramp everyone was eager to get on the water. 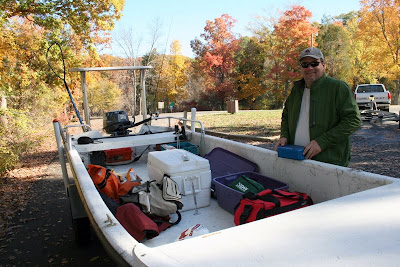 The weather was warmer than anyone expected and the trees were showing off their fall colors in their last attempt before winter. No one really knew where to go so we started to search for birds. There were some seagulls hovering here and there but we were looking for frantic action. Birds diving, water disturbed with fins and flying minnows. 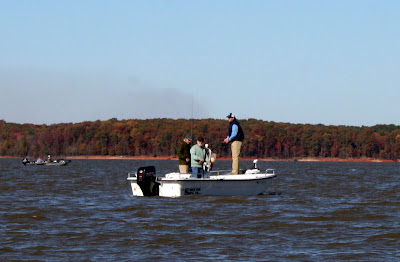 The fish indicator marked fish at various depths. We all worked water and hoped for the best. In the main channel there was always a nice brisk wind. Once you tucked in a cove the atmosphere was calm. The water had a murky brown color to it. After having no luck my friend John and I moved to a different part of the lake. The water cleared considerably but there was no birds or sign of life. There also wasn't any other boats, on top of that the fish indicator was silent. 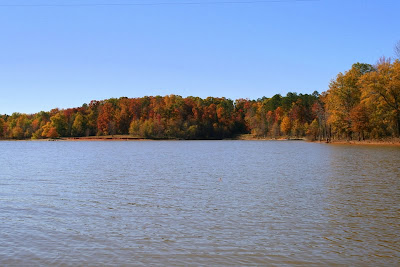 I dropped my line in anyways. You can't catch'm if your line isn't in the water. Our efforts were fruitless and after awhile lunch started to really sound good. 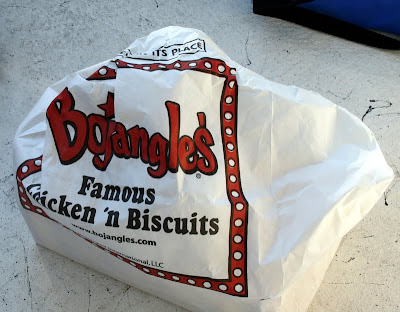 Chicken and biscuits hit the spot! We headed back to where we started to see if the others have had any luck. When we found the cove there they were fishing we saw small shad jumping every where about 30ft off shore. There didn't seem to be any fish pushing them to the surface. It was hard to tell why they were so active and jumping out of the water. We figured big fish have to come and eat these sometime so we hung out and cast different flies among the shad. In the meantime we watched bald eagles and other birds.

Then just as we least expected it and were just kind of sitting around chatting and switching flies I heard a splash. I pointed to where I saw it and when John looked over three more simultaneous huge splashes disrupted the water. I went to tie a fly on faster than I ever have in my life. John started the engine and tried to get us closer to the splashes. It seemed in just 10 seconds there were about 20 splashes and gaining intensity. The boat seemed to take forever to get over to them. As we got closer we saw our friends quickly approaching from the other side. They could see the splashes from across the lake. John hucked his fly out and my line was in the water shortly after. The fish seemed to be every where. On my second cast I had a fish on and it ran to the right of the boat right under John's line. He was quick to get his line out of the water and nice enough to net my fish. Then there was the adrenaline rush of scrambling to get the camera and have him take the picture, all the while fish are busting all around us and we are basically wasting time with this taking picture nonsense. While John's taking the picture we over hear our friends whooping and hollering at fish they are either hooking or missing. 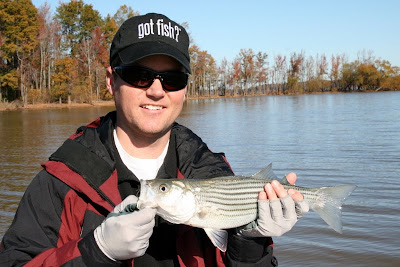 The fish snaps my line after the picture and I tell John "just to go back to fishing." I frantically work to tie on another fly and he casts like a mad man. The splashes start to subside and no one wants to say it out loud but we all know this might not last much longer. Maybe a minute or two more. We start doing things out of excitement rather than logic. If we get right on top of the few splashing fish that will make us catch them right? That wasn't the case, as we got closer the splashes became less and less. Eventually we were staring at calm water and minnows jumping here and there again.

What an amazing experience though and it was the kind of thing that makes you come back just to experience it again. It was nice knowing the fish like the white and chartreuse clouser I tied. Then came the best part of the trip. Getting together and sharing stories of the day. 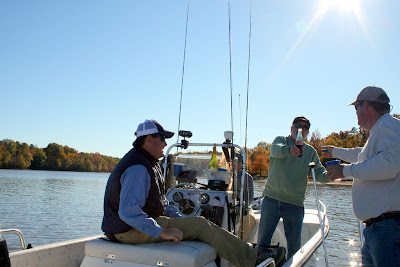 Asking each other questions like what kind of flies were working or how many fish did you get? Hoping they caught some but not more than you. It was a fun day of fishing not catching and I'm ready to come back and do it all over again.
Posted by Feather Chucker at 4:58 PM 1 comment:

Knowing when to Stop

A buddy of mine sent me an email about fishing this weekend. I decided to take him up on it and literally as I was looking at the water levels report he called me. The river was up higher than normal but not too bad. We planned the logistics and decided to meet the next morning. After I hung up I checked the weather report. There was a 30% chance of rain and it was going to be cold. Not very attractive conditions. I still woke up the next morning looking forward to getting on the river. I gathered my things and as I got in my car I noticed the temp read 46 degrees. That's not very cold.

As I headed towards the river I noticed dark clouds along the horizon. The temperature seemed to drop every 5 min. I pulled into a gas station not even a mile from the river, the temp was now 41 degrees and a steady sprinkle had started. When I met my friend and started gearing up the rain increased and the river level was a lot higher than I expected. We tried to make the best of it. I watched the wildlife and checked out the fall foliage. I went to take a picture and the low battery alert flashed on my camera and the display went black. I worked sections that I knew held fish. All the time watching water levels around certain rocks to give me a gauge to tell if the water is rising. The rain seemed to get worse whenever I headed up stream. Whenever the fishing isn't very good you always seems to notice things that wouldn't bother you other wise. My hands felt numb from stripping wet line. My jacket really wasn't water proof and the top layer was soaked. I started to feel a over all chill which I hate. I tried to wade and just keep casting to keep myself warm. Whenever a breeze hit me it made it more difficult to forget the cold.

In the middle of thinking about how miserable I was and tying on another fly I dropped my rod in the water. That's when I knew the cold was making it hard for me to concentrate. I watched my rod sink and at first I expected it to stop. Then a flash of what really was going on hit me. The water was about 2ft deeper than it normally was and if I didn't grab the rod soon I would probably have to get my torso wet to get it. I jerked my arm in the water and snatched the rod without lifting up my jacket sleeve. Now I had a soaked cold arm to go with the rest of me. That was it, I told my friend I was calling it a day. In the past I would have just fought through it and made myself miserable all day. When I got in the car it started to rain harder. I turned on the heater and noticed 40degrees on the temp gauge, I was happy I left. It could be a sign of getting old but I'm happy that I'm learning when to pack it in, instead of torturing myself.
Posted by Feather Chucker at 6:42 AM 2 comments: