Another Catfish on A Fly 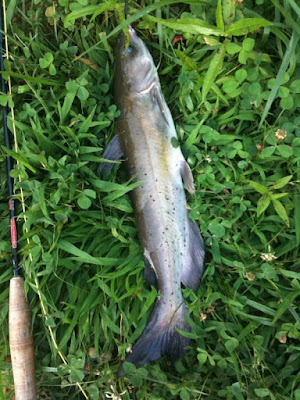 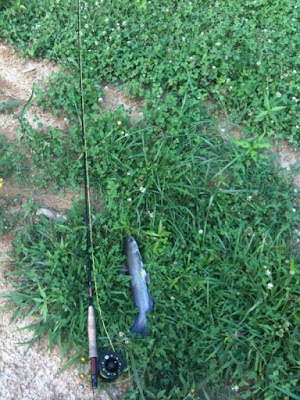 Fished at a buddy's pond tonight. Caught a few gills and this guy on a san Juan worm. He gave a pretty good fight.

Posted by Feather Chucker at 8:39 PM No comments:

Email ThisBlogThis!Share to TwitterShare to FacebookShare to Pinterest
Labels: catfish on a fly., Flathead on a fly 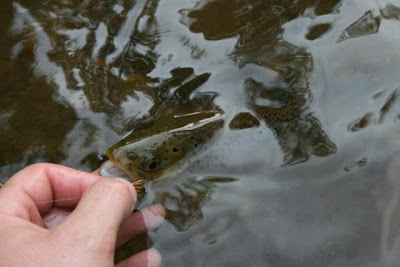 I guess I never will learn from past experiences. What I have learned recently is when I think something is not a good idea it probably isn't. An example, I had a reel that has a broken crank on it. I've been just using my palm or finger to reel in line. I decided to finally remedy this. I wanted to switch the line from one reel to another, so I started stripping it off, I got impatient and started just bundling the line all over the back of my car. While doing this I thought "this isn't a good idea", but kept doing it. Then after wards I looked at the birds nest of fly line and forgot about it. This weekend in Boone I wanted to go fishing but needed to put that line on my other reel. The ball of tangled fishing line was intimidating but I started to work at it. It was HORRIBLE! The whole time I fought with it I thought, how did I let the line get like this? and I should just cut the line here and start over. I spent an hour untangling and stripping one peice trough the mess of tangles. I would slowly get a few feet of line as a reward each time I removed a tangle. I did this for about an hour. I got all my gear together and made my way to the Watauga River. The river was stocked the week before and I was sure it had been poached plenty but had to have a few trout left.

When I got to the river and started to put on my gear I noticed my boot didn't look right. The front of the sole seemed to be coming off. These were my Korkers,less than a year old. The bottom front was coming off, this kept the felt sole from staying attached. This irritated me but I still figured I could walk with one felt sole and the rubber on the other boot. When I stepped in the water and slipped a little on the rubber sole side, I thought "this is a bad idea." I made my way carefully upstream, tap dancing here and there. I made a few casts untangled my leader which was way too long. I wanted to make sure I had plenty of tippet so I tied on about 10ft of it. I felt like such an idiot. Fishing with a 18ft leader. Talk about hard to cast with a dropper, it was ridiculous. I went with a caddis and a black stonefly as a dropper. The leader was so long I snagged the stonefly on the bottom every third cast. Combine this with me slipping and my REEL FALLING OFF, I was not a happy camper. Why does my reel always fall off? I used to make so much of a fuss about people paying a lot on equipment. Now I realize there is something to that. You might have spent a lot for a reel but I bet it doesn't FALL OFF while fishing. It's so annoying to do two false casts hear a PLOP! Then see your reel go down stream. While walking up to unsnag my stonefly I slipped and did something I haven't done in my illustrious fishing career. At least not since I've labeled myself as an adult. I started to slip and I was like this isn't good. Of course I slipped on the rubber sole side, I knew I was hitting the water but didn't know how this was gonna go. The water was about 3ft deep and half of my body went under. My head actually almost went in as well. This was the worst I have ever fallen while wading. The cold water shocked me and I cut my hand stopping myself on the sharp rocks. The whole ordeal made me want to just call it a day and pack up.

No way I was doing that though. I'm in Boone, I drove to far to just pack up after 10min of fishing. Plus I knew this is my normal scenario of learning things the hard way. I need to slow down take my time and be more careful. I worked my way fishing up stream going here and there. Eventually I came to a fast section where I caught a trout. It's the one in the picture at the top of the post. I've decided I'm not going to post pictures anymore of fish I catch. The reason being it is such a pain to get everything together. Unless I use a different camera it takes about 2min from fight to picture. I feel bad for the fish and this one I'm sure got away fine. It was just annoying to hold him and stress him longer than was needed. I kept fishing moving further upstream, that fish would be my only trout for the day.

The Watuaga is a strange river. I guess all rivers are similar, I'm just not used to fishing them. What's strange is how the fish species will change drastically with the seasons. In the spring, fall and winter months, the water is mostly trout water. You see suckers occasionally but you never see a large or small mouth bass, or blue gill and rock bass. In the summer every slack water pool seems to have rock bass in it. Where are these fish in the colder months? Do they migrate? I'm not really sure but it's fun to catch different fish. I caught a couple rock bass then came to a slow slack water section full of sediment and slow deep water. Definitely not trout water but perfect for gills and bass. I cast toward some foliage near the bank with a popper. Made a twitch and WHAM, fish on! The fish was large but I could tell it wasn't a trout by it's flash beneath the surface. As it came closer I saw a shimmer of the golden under belly, it was a beautiful sunfish. I'm not sure if it was a sunfish or some of the gill species that only inhabit the Appalachian. Either way it was one of the prettiest bluegill I have ever caught. I wanted to take a picture but after the last fiasco I decided to just let it loose. I think the fish was appreciative. It was a great day even with the disturbing beginning.
Posted by Feather Chucker at 6:35 PM 1 comment:

Here are some nice links I found about setting up droppers and explanations on how fish see.

http://www.underwateroz.com/pg4_trout_vision.htm,
Posted by Feather Chucker at 12:13 PM No comments: