For some reason, browns are special to me. I've always had a deep respect for them. They seem to be great at adapting and efficient at hunting. Arguably they are the smartest fish when they're combined with rainbows and brook trout. There is a feeling of accomplishment every time I catch a decent sized brown. Catching one over 15inches isn't a common occurrence for me. What I find interesting is the bigger browns I usually catch are on flies I have no real confidence in. Take this last fishing trip for instance. I've never been a huge fan of copper johns. I have friends that swear by them but they never worked well for me. I'm sure it's partly because of my confidence in fishing them. On this day I was running low on the usual softhackles I love and decided to try a rubber legged copper john. I didn't catch a ton of fish on it but did manage this largest fish of the day which happened to be a brown. 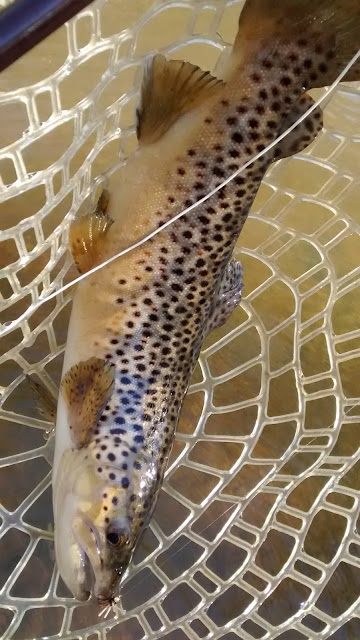 Do the larger browns hit these flies because they are less common and they haven't learned to avoid them yet? Or is it just luck? I have no idea but it keeps me reaching for those flies in the far corner of my box that get overlooked.

Posted by Feather Chucker at 8:49 AM 6 comments:

I hadn't worn my waders in months. Hurricane Matthew gave me a good reason to wear them again as I assessed the water around my house. We had over 6" of rainfall in a 24 hour period. I found out water will find a way to seal itself even where there are cracks. The water had pushed leaves, pine needles, and other debris against the cracks in the fence and created a dam. Water started to build up and push its way towards the house. My last resort was breaking one of the fence slats to let the water out. Once I made the hole I could feel the current pushing against my waders. It made me think about the people wading through several feet of water in other areas. That has got to be terrifying. The day after the storm was beautiful. Not a cloud in the sky and the air was dry and cool. It was the first day that really felt like fall. I was able to muster up the family to go on a bike ride. I wanted to assess the damage on a local greenway. The creek that followed the trail was swollen and water covered the trail several times. We also came across downed trees.

This part of the trail was unrecognizable. Sediment covered the trail and the creek used the trail for its flow. 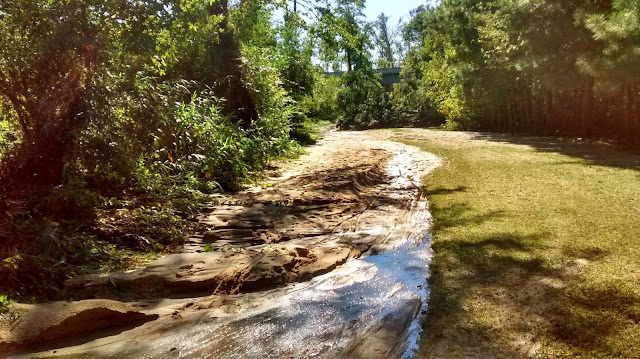 Nature never ceases to amaze me. We were really lucky with Matthew it could have been a lot worse.