Maybe it's the way I cast, maybe I tried too big of flies for the rod but on my third trip trying this fly rod it broke. At first I thought maybe I didn't have the sections properly connected. After inspecting it more I noticed tons of fractures around the blank. The rod was going to snap eventually no matter what. The rod has a 1yr warranty but honestly I'm not going to bother. For $25 I basically got two trips out of the thing. This is the second Featherlight I've had and I liked the action of the 5-6wt far more than the 3wt but after what happened recently I can't recommend it. I'm probably the first blog that has given this rod a bad review. I have to be honest. For $40-$50 more you can find the Redington Pursuit rods. They by far out perform the Featherlight and have a lifetime warranty.

The buff is a great idea in theory but its flaws prevent many anglers from using it. The first and probably worst part about the buff is ventilation. The buff doesn't necessarily get too hot but it doesn't have enough ventilation to allow your breath to pass through the material. Heat rises and the first exit point is where the buff meets your glasses. If you don't have fogless lenses this will cause your glasses to fog up every time you take a breath. This doesn't seem too bad at first until you combine foggy lenses with trying to wade. Your sight is not only your biggest advantage when fishing but also a huge factor to safe wading. The other problem and it might have been just for me is the material was very irritating if I had any kind of stubble. Moving my head from side to side caused such infuriating irritation I had to take the buff off. I don't know too many people who make sure they are clean shaven before going fishing. These two things for me make the buff almost unwearable. I still give it a try every now and then but once my lenses fog up the thing comes off. I wish I could use it more because I like the idea behind it and the sun protection. Maybe future version of buffs will solve a lot of these issues. Until then I'll continue to slather on the sunscreen.
Posted by Feather Chucker at 5:11 AM 10 comments:

You can either deal with the crowds or stay home. That's all there is to it. It was a good call to get there early. 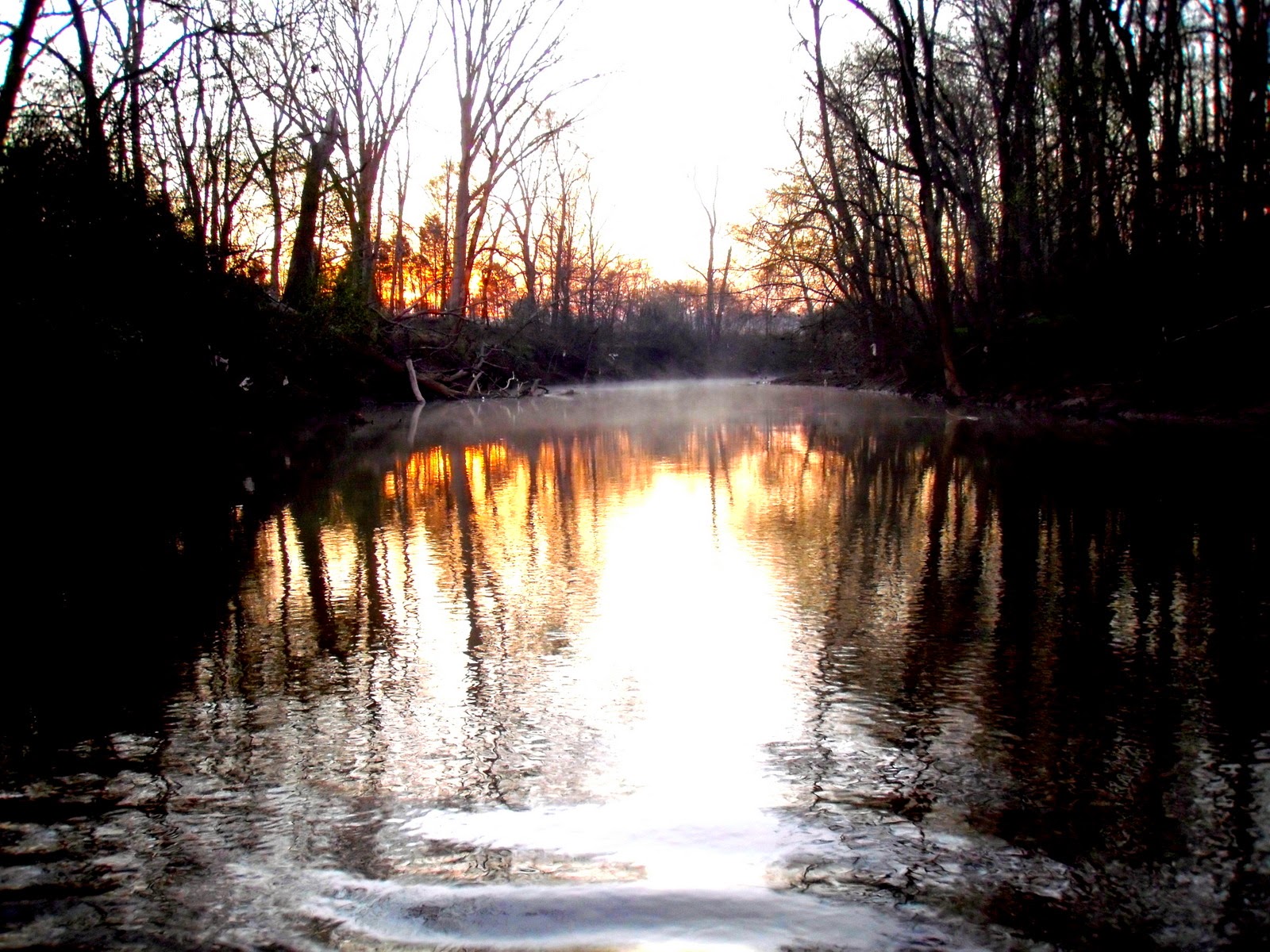 Even on a weekday I wasn't alone. 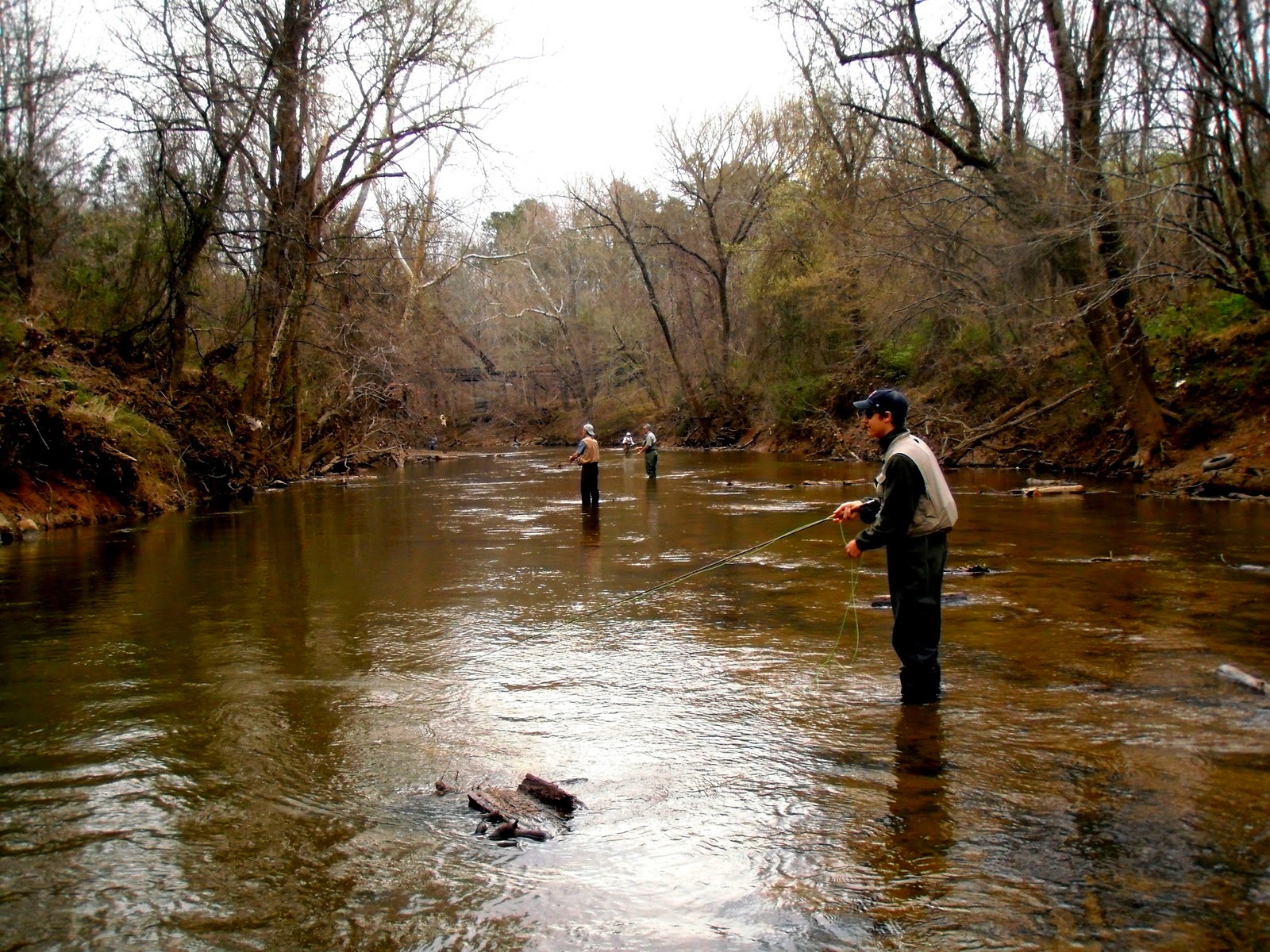 Combat fishing at its best. You sometimes wonder why fish would bite with this much pressure. 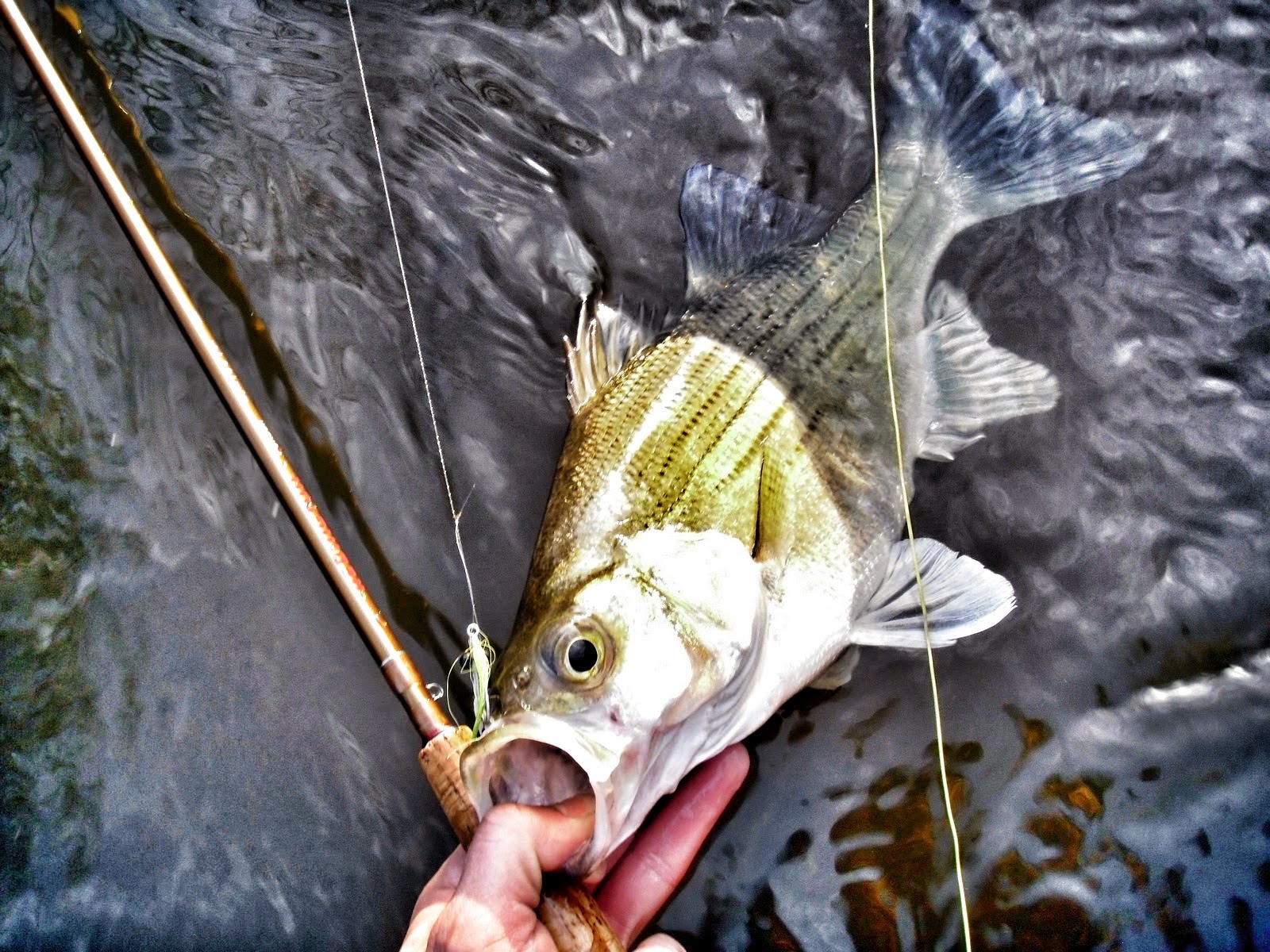 Of course they do and it's a feeling I waited a year for. I can't get enough of it. The posts might be light the next couple weeks, you know where I'll be.

This year has had a strange start. The timing for when I can fish and when I want to fish just doesn't seem to mesh. While standing under the trees getting soaked on a small brookie stream, I couldn't help but think about stories of rising water and big fish on rivers. There was a river close by but the weather was miserable. I still decided to chance it. On the way down to the river I caught several glances of the headwaters. They were becoming limestone colored and milky. Not a good sign. The water level was staying surprisingly steady and not building to a flood pace. While gearing up there was a break in the weather and the sun showed itself for the first time all day. It was quickly hidden by other clouds and a drizzle started once I made my approach toward the river. The upper dirty water must not have made it downstream this far yet. The water was stained but fairly clear. Several people have told me that some of the best fishing is right after the water is rising and has a stain to it. I decided to test this theory and brought out some streamers. The first  fly I tried was my trusty white wooly bugger. When the fly landed I saw a flash instantly and I was late setting the hook. The next few casts I saw movement here and there and several follows. 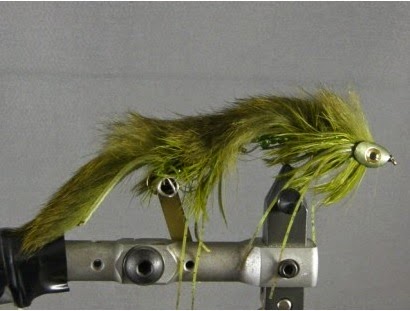 Then I brought out the big streamers. The ones I used in Utah for monster trout. The flies have exotic names like Circus Peanut and Sex Dungeon. They land hard and take a bit of figuring out before you get the action you want. The flies take awhile to sink because there is so much material. Eventually I got the fly to swim in the column I was trying to fish. I watched the fly as it moved across the bottom. This happens often but while focusing on the fly everything becomes kind of a blur. The river bottom becomes one color and the movement of the fly becomes hypnotic. This makes the presences of a monster trout that much more striking when it starts to follow the fly. The beast swam at the exact same speed and seemed to expect it as it swam. Then it started to slow down and watched the fly for a certain distance downstream then the fish disappeared as fast as it appeared. I tried several more casts but never saw the fish again. It's times like this you start to doubt if you really saw anything at all. I moved upstream and fished a different run. Every once in awhile I thought what I saw were fish following the fly but I couldn't quite make it out. Then as the fly went over a rock a gold shimmer slashed and then returned to the shadow of the rock. The fish seemed big but I couldn't really tell everything was happening so quickly. Then I saw a behavior I haven't ever really experienced.

Every cast that went directly over this rock got a follow. I believe the fish was a brown and it was enormous. As long as the fly took the same path the fish would follow it but only so far. It followed the fly maybe 3ft before turning and disappearing back under the rock. I changed flies to see if that made a difference. The fish followed the same way until my third cast. The fish hit the fly a few inches from the surface and the water exploded. The fish did several somersaults but it was already free. I'm not sure what happened, my leader broke where it met my fly line. The whole experience had me talking out loud to myself. I tied another fly on quickly but couldn't get the fish to follow again. I moved upstream and found another big builder in a similar run. I tried doing the same retrieve that enticed a follow and again a big brown started going after the fly. The same as before this fish would only move maybe 4 feet then it would retreat back to its lie. The follows were so fast and ferocious they were startling. The drizzle started to turn into a rain and the dirty water started to make its way downstream. I thought this might turn the fish off but I began to see more fish activity. I didn't see big fish but I did see several average size fish breaking the surface. I wasn't sure what they were hitting. I didn't see any signs of a hatch. Along the back side of the run was an eddy. This eddy couldn't have been more than 4ft long and 3ft wide. It reminded me of the exact places in UT where big fish like to hold. My first cast was off and the fly landed right in the middle of the eddy. I still gave the fly a few strips just to see what happened. I thought I saw a shimmer but the dingy water made it difficult. My next cast landed upstream of the eddy and I started to strip as the fly drifted through. This time a beast of a brown came up and nailed the fly. This fish was larger than the last beasts I had seen. It's tail slapped as it tried to maintain it's position but at the same time drive the fly deep into the water. I wasn't used to this. These fish were the biggest I had ever seen in this river. This fish didn't follow the fly after several casts like the others. I tried changing to a smaller fly to see if maybe the fly I was using was too large. This resulted in no action at all. I didn't see any follows, flashes or any kind of movement to indicate fish were interested. I tied back on another 4inch streamer and instantly things changed. I kept working several places where I figured fish might be hiding under rocks.

I came to a pool that is probably the deepest part of the river for a mile or so. There's a rock ledge you stand on and a high bank makes it difficult to get a good cast in. I cast upstream and started to grab my line to start stripping. A big brown again came up and exploded at the surface. I was late setting the hook by about a second. The fish was long gone. Part of my delay was the shock at what was happening. This was not normal for me. I actually felt under gunned with a 5wt. The strikes were so explosive and lightning fast they'd give me small heart attacks that were terrifying and ecstatic at the same time. I cast near the back of the pool and the current drifted my fly faster than I wanted. I started to strip it in really quickly and it made small wakes across the surface. When the fly was maybe 3ft from shore the biggest fish yet destroyed it. All I saw was a huge mouth followed buy a thick gut and a massive tail slapping the water. I just stood there kind of dumbfounded. This fish was by far the biggest I had ever seen close up. I felt so out of place, it was as if I was in a dream. I wasn't prepared at all and it was that lack of being ready that made me miss several fish. Even though I didn't catch any of the monsters it was amazing enough to see them and watch them go after my fly. To just move these beasts and watch them chase down their prey is fun enough. I was able to catch fish but they weren't even close to the size of the fish missed.

I'm definitely going to come back with a bigger rod and different attitude. Even then I don't know if I'll be ready.
Posted by Feather Chucker at 5:04 AM 8 comments: