Don't feel so bad for mayflies

Posted by Feather Chucker at 11:19 AM No comments:

Email ThisBlogThis!Share to TwitterShare to FacebookShare to Pinterest
Labels: Mayflies

Fished on Saturday, still did not catch any shad. That was my last ditch effort. I'm going to be focussing more on trying to get with someone for a striper trip. I want to look into a river I was informed about at the latest TU meeting. It's called the Eno. I've heard it pretty good from others, a lot of warm water species. I haven't had very good luck on the Neuse, I'll have to give the Eno a try. Possibly this weekend.
Posted by Feather Chucker at 4:04 AM No comments: 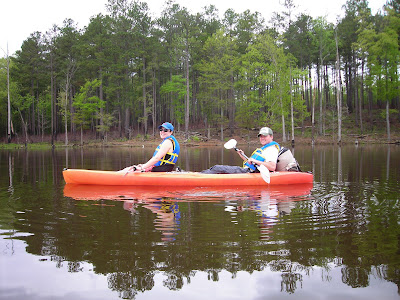 Went out with Kristin today to show her the lake where I went yesterday. It was a nice day, the carp weren't as active. I didn't fish but I did take some pictures of the dead forest. 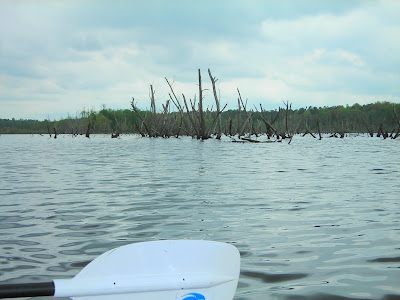 Posted by Feather Chucker at 6:13 PM No comments:

Sorry still no shad. The weather was great and I was dying to try a kayak my wife and I just purchased.

I went fishing with a buddy at Falls Lake, it was the first time fishing from a kayak for the both of us. Of course I forgot my fly rod, luckily he brought a fly and spinning rod. We paddled out to a section out by beaver dam. The water was pretty murky and there was no fish activity. We came to a section that looked very promising. A dead tree forest with limbs sticking out of the water. Navigating these trees was interesting. We didn't catch anything in between them but in the distance I saw a splash that looked like a alligator attacking something. We stopped paddling and just watched, then it happened again only farther away, then again in another section, then a huge splash right in front of us! It looked like a 3ft long carp. My buddy said maybe the section we're on was flooded from all the rain and the carp are going crazy on bugs and stuff. Whatever it was, it was amazing. Carp slashing threw water half way breaching themselves causing huge wakes and splashes that would last up to 8-10 seconds at times. It looked like those movies of killer whales attacking seals. There would be an explosion of water around a tree stump then you'd see the flash of a carps back and tail, then it would make a wake and just thrash threw water causing a huge disturbance, it was awesome. I even saw a few jump!!!? They were fully out of the water about 6-8 inches. I've never seen anything like it. The wind picked up and the fish activity died down. We fished for them but it was difficult with the wind and having to watch where the boat was drifting at the same time. We kind of did a bone fishing technique where I'd move us along pushing off the bottom and we'd look for a splash then cast to it. I wish I had my camera. If the weather holds, I'll be going back tomorrow, WITH A CAMERA.
Posted by Feather Chucker at 2:26 PM No comments:

You can now buy fishing gear and help Breast Cancer Research at the same time, you'll need to scroll down a little to the middle of the page from this link.
http://www.jimteeny.com/indexMain.html?content=catalog&page=jtCatalog/catalog/catIntro.html

I'm going to try to get on the Neuse today. I've heard reports that the only place people are still catching shad is the Roanoke. We've had some rain in Raleigh. Hopefully that's allowed some of the fish to make it up here.
Posted by Feather Chucker at 3:53 AM 1 comment: