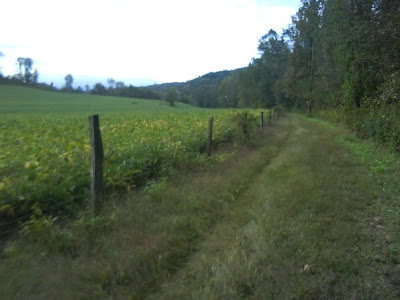 I've heard about the Mitchell River many times but have never fished it. The reports were always so so. The reputation for the river was that it was beautiful but poached heavily. The stocking for delayed harvest was Oct 3, with only 2-3 days of fishing pressure some friends and I figured we had a good chance at a lot of fish. We headed to the river with mixed expectations, if the fishing was bad we'd head to Stone Mtn. The fishing was supposed to be better there and the fisherman I went up with had more experience on that water. My friends favorite spot was pretty vacant and only showing one parked car. As we got our gear together more cars were showing up. I was told this river can be crowded. We worked our way upstream from the parking area. The river was very scenic, there is a farm that surrounds the river and gives you a very rural feeling. The water was very pretty and clear but low.

We started fishing at about 9am and it was very slow. For a river that was stocked a few days beforehand it seemed to be lacking fish. I worked different sections, fast runs, slow runs, slack water. No hits not even a darting shadow from my poor wading. The slow fishing was making us all lean towards leaning leaving and going to Stone. Just before we made the commitment to leave one fisherman with us found a consistent run. I dropped in downstream of the run and my other friend worked the one just above me. They turned out to be the best places to fish for the day. The issue with the fish seemed to be depth, they were holding really low in the water. The flies that seemed to work best were bead headed pheasant tail nymphs and copper johns. There were definite zones where if you cast too far or too short you weren't catching a fish. If you cast in the 5ft zone and the fly was at the right depth you caught a fish every time. It was a little strange to go from no fish to a fish every couple minutes. Some fish were back to back and my friend and I often had fish on at the same time or one right after another. When the fishing slowed the solution was to switch flies. Though my buddies caught small mouth I was only able to catch trout and a small chub. Being perfectly happy with that, I worked the run until it couldn't produce any longer. I had caught at least 7 fish out of the same run and missed or had on at least that many. It was probably one of the best producing spots I've ever fished. The other areas of the river continued to be slow.

We did find a spot where fish fed on the back side of the bank, behind a tree. They were hitting the surface and looked to be taking bugs. I made one of my best casts of the day by bouncing my caddis off the tree and instantly the fish behind the trunk charged and nailed it. I believe this fish had been caught before, instead of heading towards the surface or faster water, it smashed its face along the bottom, rubbing against rocks, obviously trying to dislodge the hook. It was a fat brookie, obviously feasting off of bugs that fell in the water from the tree. At the back of the run another fish was rising steadily. I through the same caddis in its vicinity and had my second brookie. That is my favorite kind of fly fishing. Seeing a trout rise, making a good cast and hooking the fish.

We ended the long day with all of us catching a good amount of fish. I was spent, I felt like I had fished every inch of the river, I think I had. My only complaint about the fishing was these trout seemed to have no fight in them. Once they were hooked, even the larger trout gave a few shakes of the head but were always reeled in easily. There was no crazy runs or terrifying moments where a trout heads for submerged branches.

Overall it was a great experience. I'm not sure if I'll hurry back to the Mitchell but I'll definitely fish it again. 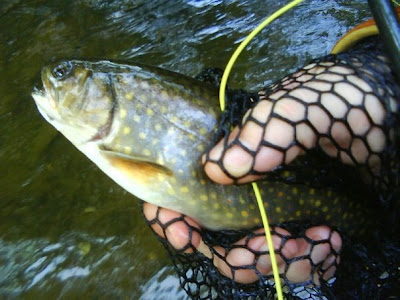