I had planned on getting some fishing in.  The weather kind of changed that.  I can fish in the snow but not when it's windy.  I did get out with the kids though. 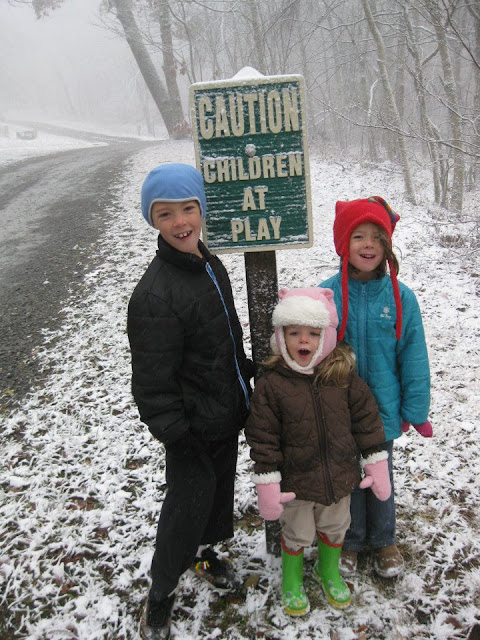 My mother was visiting the mountains and I really wanted her to catch a trout with a fly rod.  Yesterday we hit a local trout stream that usually gets hammered by locals and tourists.  To my surprise the park was uncrowded most likey due to the weather.  By the time we arrived it had warmed up consirably.  The wind had stopped and there was no snow on the ground.  I showed my mother the basics of nymphing and sure enough in and hour she had caught 3 fish.  Not bad for her first time.   I was almost skunked but hooked a trout on my last cast.  It was a great weekend.
Posted by Feather Chucker at 5:14 AM 5 comments:

Tried a new river with some friends yesterday.   The morning didn't start off all that great.  I'm kind of a plan freak.  I'm decent about planning but when things change something always gets screwed up.  I had planned to drive and have some people ride with me.  As we were figuring things out a friend said we all could probably fit in his car.  I felt we were kind of running behind already so I grabbed my stuff out of my car as quickly as possible.  Sure enough about 40min into the ride we start talking and a guy pulls out his fly box.  I go to get mine out of the back and I don't see my pack.  I left it in my car!  Luckily I was with others and kept my composure because I just wanted to cuss for about 5minutes.  I think every fisherman has a certain bond with "THEIR" gear.  There is a comfort in knowing what you have and using your own tools.   I knew people would lend me flies and things but I was so mad about forgetting my stuff I just sat and steamed for a bit.  I figured this was maybe a sign that today I needed to help the beginners and fishing will be secondary.   When we arrived at the stream I geared up borrowed 4 flies and some pliers and clippers and we headed out.
The day turned out great and I probably had the most fun watching others catch fish as I did catching them myself.
This was one of the few trips I've organized. I like doing it but I always feel uneasy when the questions come up on how to do things. The people asking me are new to fly fishing and many times they think I am a far greater fly fisherman than I actually am. I want to tell them the right way but what exactly is the right way? I only know my way. On the stream a friend was missing hook ups and I gave her some advice. She said "I was told by a guide you're supposed to do this." My response was do whatever catches fish. What a guide tells you might work that day on that stretch of river for those fish but elsewhere you may have to change your tactics. That was how the day was for the rest of us. The fish were hitting very subtle and the takes were almost unnoticeable. The indicator would either stop or honestly you'd just guess or see some slight irregular bob in the current. It was a learning experience for all of us. The challenge made the experience even more fun.
Posted by Feather Chucker at 7:32 AM 4 comments:

In Jurassic Park the main characters avoided the T-Rex by holding still. I can relate a lot to the T-Rex because when I'm fishing I look for any movement what so ever. A familiar silver flash, a irregular break in the current, the sound pattern of the water changing because of a sploop sound. All of these are ques for me to find fish. I once talked about sight fishing for trout with a guide. I went into detail about one of my favorite scenarios. It starts out with spotting the fish from a distance then working my way into position and make what I think is a perfect cast and the fish seems to follow my actions like a puppet. The guide listened intently then said "You know most intelligent fish won't hang out in the open like that. That's not a very efficient survival behavior. That fish was probably mentally ill."  At first I didn't know whether to take offense to the comment or agree with his logic. One great thing about seeing fish is you can watch their behavior when your fly comes near them. This gives you a great insight and knowledge to things that are many times hidden from view. For me these are some of the best times. It's like watching an interactive show that is only on display for you. The fish may follow your fly down stream or strike at it instantly. The best is watching a fish charge your fly or follow it with a vengeance. The fish might make several slashes maybe one out of hunger but probably more likely out of anger. The whole ordeal is fascinating and I never get tired of it.

Yesterday I fished a Designated Harvest trout stream. Hatchery trout often get the label of ignorant will hit anything, are no challenge, any one can catch them fish. The scenario I faced is why these fish get this label. Sometimes after stocking the fish will not leave the general area. In one place I check out rarely the fish literally do not leave with in 100yds of where they are stocked. Of course you get a few that are smart and decide to skedaddle to safer areas but the majority sit back and watch as many of their friends are hauled away involuntarily. Maybe they are comforted by the friend being thrown back minutes later, hopefully unharmed. I approached one section and my expectations were met with anglers standing just far enough to not be in each others cast. You could see the fish from the trail hanging out in glass pools where any osprey or eagle could pluck them for lunch. I was amazed that one usually popular spot was open for fishing. I walked in the water not worrying too much about stealthy wading. In the run I could see purple objects that stood out from the river rocked bottom. Those are the trout and they are what everyone is here for. I tried to go some what classy first. I consider myself a decent fly fisherman and even though I don't think I'm above using wooly buggers I wanted to try catching fish with a midge pattern or something insect like first.  I had no indicators so that would add to the challenge some too. I used a dropper set up and after I missed a few hits and figured out the drift I had a fish on. The trout didn't fight very hard and it gave up with in seconds. 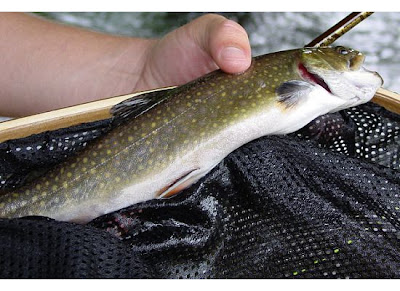 That is another thing about DH fish since they are released and fished so heavily it's not uncommon to catch a fish that has been caught a couple times earlier in the day. This causes the fish to become super fatigued and they don't fight well. After a few trout the fish seemed to ignore my fly. Another common thing for DH fish. Many times if you change the fly you'll catch a few more and you repeat this pattern. This day I decided to take it a whole different way. The fish are considered dumb but lets think about this. These fish have been raised to think humans are what feeds them. On top of that most of these fish probably associate people with food. Does that make them dumb or a victim of circumstance? As I pondered this I thought about the food part and pretty much how these fish think.  They will most likely hit anything they think is food or just out of curiosity. I had a fly my friend tied me for smallmouth. This thing was about 2 1/2 inches long with dumbbell eyes and rubber legs. 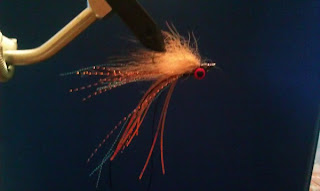 Not your average trout fly. I cast that out and on my second cast I had my biggest fish of the day. I could see everything, my fly hitting the water, the action of how my strips made the fly work. I saw the fish charge from the bottom and slam the fly. This fish seemed fresh like it hadn't been caught before. It was a plump 13inch brookie and it was starting to show its fall colors. I had so much fun with that experience I fished with the clouser the rest of the morning. I realized this a long time ago but it was made more evident that morning that visual fishing for me is where it's at. It is no wonder why I love sight fishing so much. Popper fishing for bass, blue gill top water fishing, carp flats fishing and sight fishing for trout. So for me bring on the dumb fish. I can have fun catching them all day.
Posted by Feather Chucker at 4:55 PM 4 comments: