The Smith River is less than a 2 and a half hour drive from Raleigh. All I really knew about this river was that it was a tailwater fishery and very technical. The Smith River TU was having a "Fish With A Friend" event and I figured this would be the best way to learn the river. I met up with the group early in the morning. I thought it was funny that even though this was a totally different fishing club they had the same characters. It was a fun group of guys and you could tell they had a deep appreciation for the river. One member gave me a brief history lesson of the Smith. In the 50's Philpott Lake Dam was completed and there was a decision to make it a coldwater fishery. Browns and rainbow trout were stocked and in the 60's biologists found the browns were naturally reproducing. A huge population of alewives and shad had spread in the upper lake and whenever the turbines kicked on these shad would be shredded into trout bait. The result was huge fish. The word was 30yrs ago if you tried to report a big fish that was taken they wouldn't even bother reporting it if the fish wasn't over 10lbs. Records were broken almost weekly. Eventually screens were put in front of the turbines to stop fish from getting sucked in. Walleye were stocked in the upper lake and they also took their toll on the shad population. Biologists realized the water pulsing out of the dam was causing issues. Scouring prevented insects from reproducing correctly. The water is also too cold for other fish species to survive. There is a limited number of prey the trout can feed on. Big trout numbers started to dwindle. The numbers of large trout today are still going down.  There are self sustaining brown trout populations with the average size of 6-8inches. Even though the sizes are small the quantity of fish is great. In a recent survey over 1000 trout were found in a short distance. This has resulted in a change with how the fish are harvested.

The river reminded me of the New River on the North Carolina side. It really did look like a perfect smallmouth stream. I was partnered with a seasoned fisherman named Neal who had excellent knowledge of the river. He started to go over the proper way to fish the river. It was almost as if he knew all my fishing weaknesses and said do that. Many parts of the river are calm and almost like glass. 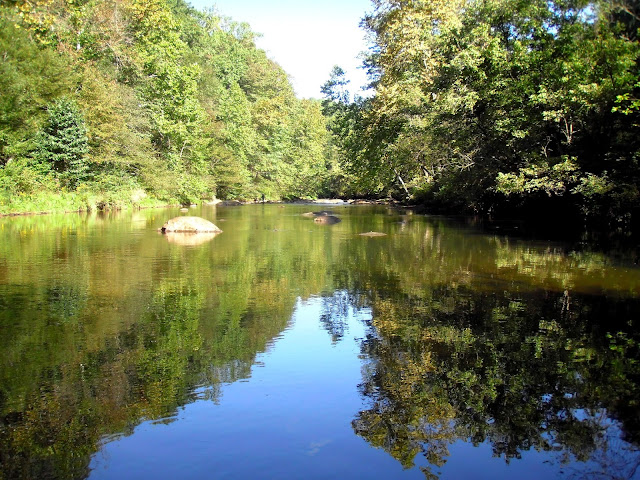 Slow wading was a must as well as long leaders. I have a hard time casting a leader over 9ft. I can do it but I'm not used to it and I can never get the fly to land exactly where I want. Wading was excruciating. I'm not used to wading that slow and it was hard to be patient. A fish would rise and I'd cast to where I thought it was then it would rise again maybe 6ft further out from where my fly landed. It was like the fish were playing with me. Just rising far enough away to where I couldn't get my cast. If you got impatient and tried to move up too quickly you'd spook all of the fish in the area. The river bottom was gravel and sandy. Trying to wade without making a sound was difficult. My partner caught 5 fish in the first 5minutes. I didn't even get a hit. I figured it was just a matter of time. I also kept hoping for a quick fast stretch of water. Where maybe I could get closer to the fish and not have to be so technical. 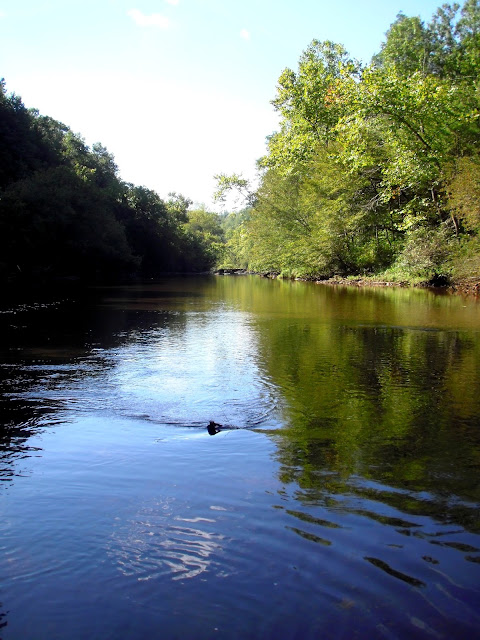 I didn't have much luck finding such a place. Neal's action went cold and we started to talk more than fish. It was great getting a chance to know each other. We had a lot in common and he helped my learning curve a lot. Even with his help I went the day with only one hooked fish that came off after about 2 seconds. This river can humble you quickly. It's ideal for someone who wants to perfect their skills. I truly believe if you can be successful on this river you can catch fish anywhere in the US. The river will test all of your skills. Casting, wading and most importantly patience. The trout may not be big but if you catch one it is a true sign that you have progressed as a fly fisherman.

Get A Cool Shirt and Help Flood Vicitms

Cameron from the Fiberglass Manifesto had a post about a company called Rep Your Water. This company is donating $5 from each of the products they sell to the flood victims in Colorado. Check it out.
http://thefiberglassmanifesto.blogspot.com/2013/09/rep-your-water-helps-flood-victims.html
Posted by Feather Chucker at 7:18 AM 2 comments:

I have seen quite a few blogs lately discussing fly line. There are a lot of questions about whether or not an expensive fly line is worth it. Here is my opinion. I have several fly lines that are over 5yrs old. I NEVER clean them. These lines are all lower end in my opinion. They cost less than $30. One is a Sage that was probably $50 band new but I got it onsale. The other lines are Scientific Angler and whatever comes stock on a Cabela's reel. Probably Cortland. I never have once stripped all my line off and ran it through a rag with line cleaner or dish soap. One thing I have noticed with my oldest line is it does look faded, dirty and it's definitely not as smooth as it once was. It does change how the rod casts and I think I get more tangles because the line is just tired. It still performs and I could probably use it a few more years without any complaints. I'm wondering if I had cleaned my line and maintained it properly how much more life I'd get out of it. People seem to switch fly lines almost as often as they do rods and reels. Most of my lines are at least a few years old. How long should a decent fly line last? If I pay $70 for line to me it should last a lifetime.
Posted by Feather Chucker at 5:40 AM 5 comments:

Many fishing trips have a lot of uncertainty. There's always concern about other anglers getting to the water before you. Will the weather hold? Are the conditions going to be right? Usually there's a long drive involved and you just don't know how things are going to be until you get there. 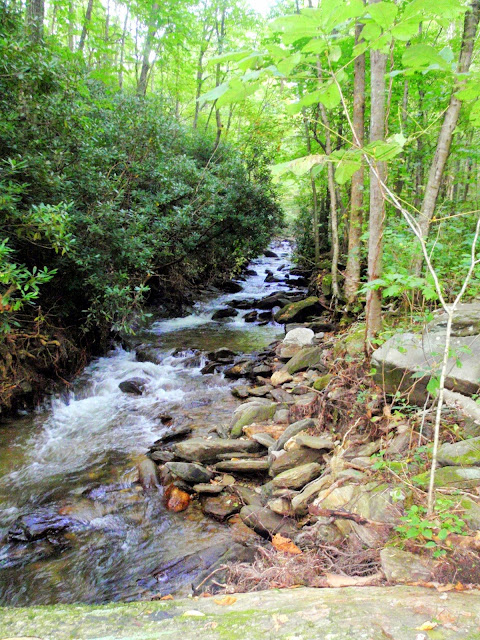 Even after you get there and things seem right there are still doubts about the fishing. 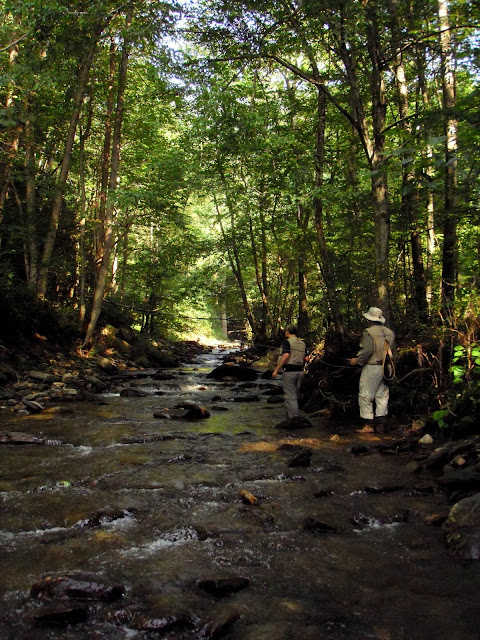 I cast into each pool with hope that a fish will be there. 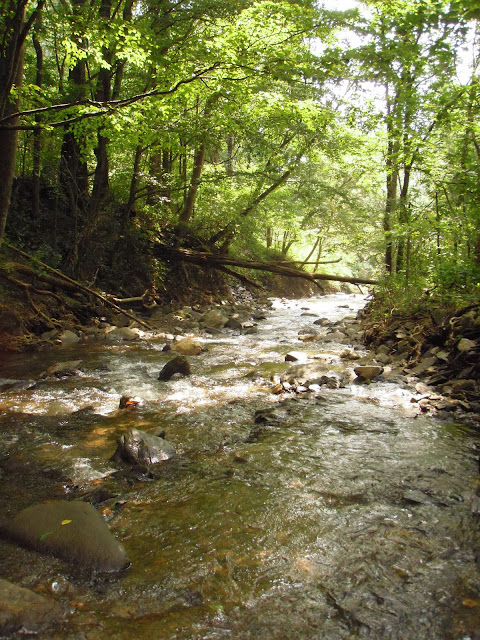 More often than not nothing happens. 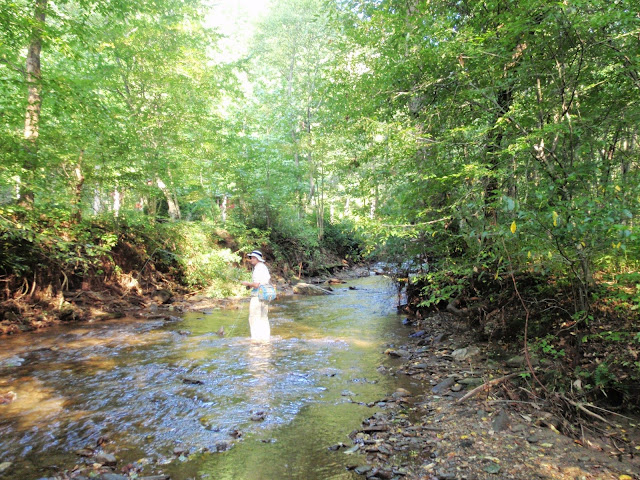 Every once in awhile you get lucky. 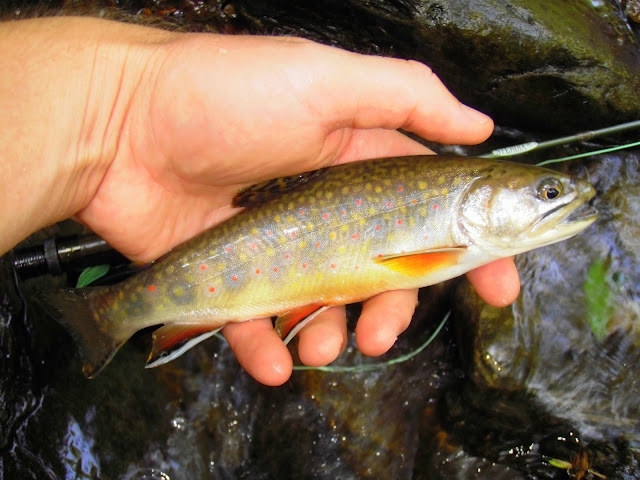 In between fishing spots you fight moving rocks and spider webs so thick they should be called spiders ropes. 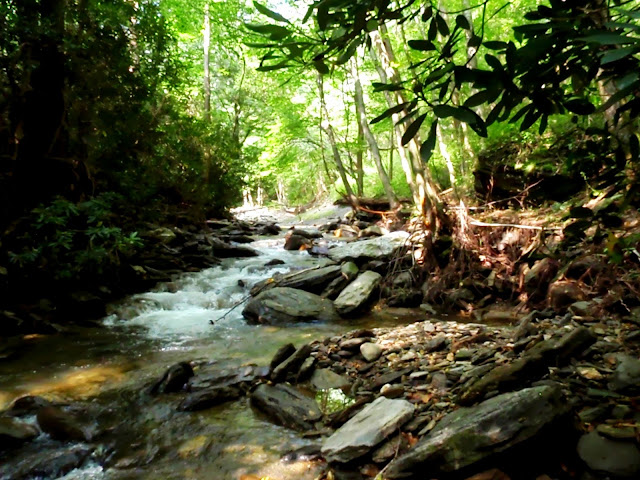 Even with all the effort and trouble. It's worth it. 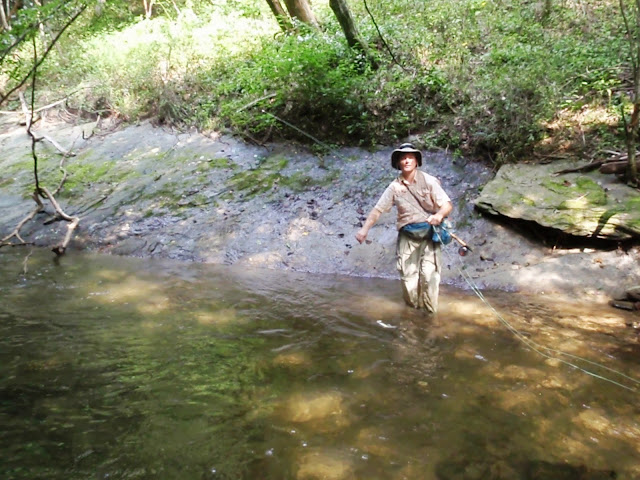 Posted by Feather Chucker at 7:12 AM 5 comments: