I've been really eager to catch small mouth bass lately. I was told of a place near where my brother-in-law lives that has a good supply of them. This Labor Day, my wife and I headed up to Boone, to visit the family and get in some fishing. The weather was perfect. There has been some decent rains recently and the River level was at perfect depth. We weren't the only ones enjoying the river, there were canoers, kayakers and people tubing. We shuttled some friends to a put in and surveyed the water while they were getting ready. The scene made me antsy to get my fly rod out. 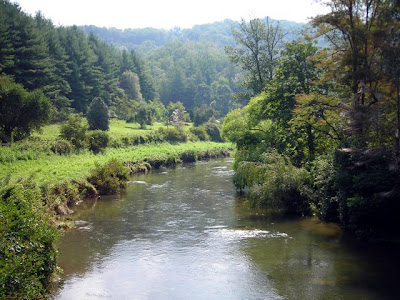 We drove to anther put in and decided to start our fishing from there. The water was cool and clear, there were flowers blooming on the banks and insects buzzing around birds singing. Everyone was enjoying the day. Russell was able to catch a little sunfish right off the bat. We figured this had to be a sign for a great day. The ticket for him was a black ant. That fly was the fly of choice for the day, I was reluctant to tie on the same pattern. I went with a popper, white bugger, and hopper with a san juan dropper. I had no luck with any. Russell was doing well catching fish here and there. 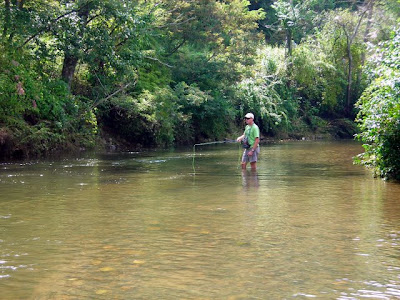 There was lots of cover on the banks, perfect for holding fish. The cast was usually done from the opposite side of the river with a presentation of a bug falling off the overhanging branches. 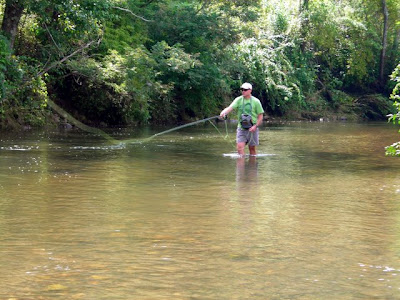 Russ, continued his good luck catching a red eye, then a few casts later, his first smallie of the day. 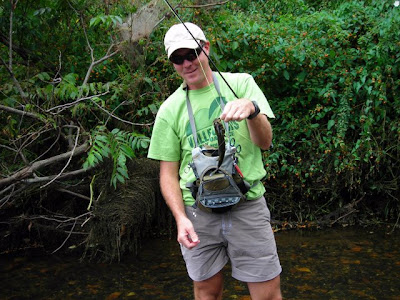 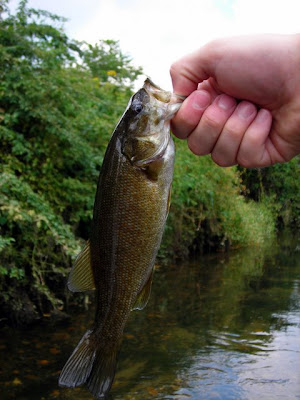 I was happy for him but getting a little irritated. This was his fourth fish and I still had yet to catch one. We came to a section that was very calm and had pine trees towering over the water. I figured fish might wait for bugs to fall off the trees. I threw a popper near the bank and instantly had a strike. I missed the first few hits but later was able to manager a red eye. I was happy to get the skunk off for the day. I figured the fishing would pick up. We worked our way upstream but the fishing was slow. We saw a group of paddlers heading are way and knew they'd probably disrupt the water enough to spook any fish. I decided to head back downstream to the parking lot, for fun I tied on a clouser I made from a fly tying class I took a few months ago. I messed round swinging it in the current. I looked at a tree near a bank that had a eddy underneath baring its roots and creating good cover. I threw my clouser in there and swung it away from the pocket of water. To my surprise I had a hit. I kept thinking, "please be a smallie, please be a smallie." 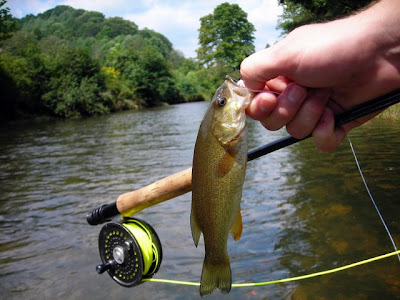 Sure enough it was. I can't describe to you the rush you feel when you catch a fish on a fly you tied. Especially in a situation where everything comes together. You pick the cover, throw the proper cast and your fly tricks the fish. It really makes fly fishing addicting. I was so proud of myself I had to take one more picture. 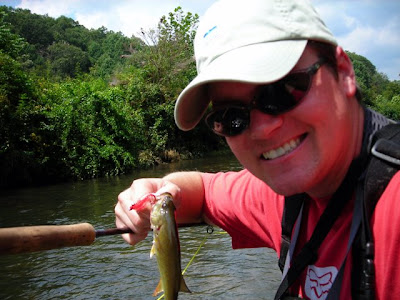 God blessed me with that fish but decided to let that be my limit. The paddlers were splashing and causing a commotion anyways. We decided to head back and fished the parking area with no success. It was a great day. I think Smallie fishing will be my summer fishing when its too hot for trout. They are really fun to catch. The thing I found while fishing for them is you need to be on your game. They hit just as fast, if not faster that trout. If you have a lot of slack line in the water you will miss them for sure. Red eye, also known as rock bass are no slouches either. They hit flies with such ferocity you can't help but appreciate their intensity. They are small fish and must figure what ever they hit they have to kill fast, so when they hit your fly, usually half their body breaches the water. It was one of those perfect weekends, where Kristin and I had time to fish and spend time with family.
Posted by Feather Chucker at 6:01 PM