While my wife and I were in Boone this weekend my brother-in-law was nice enough to guide me and a friend up some routes on Ship Rock. The forecast called for showers on and off, when we woke up Saturday morning the sky was blue and no storm clouds were in site. We headed for the parkway and decided to try our luck on Ship. 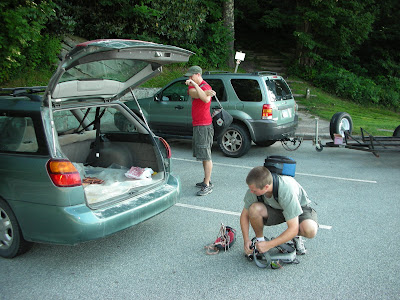 The excitement started to build and as usual I had an issue getting my harness on right. It's not a big deal but from time to time one of my leg loops always gets twisted and I have a hell of a time figuring out why it's happening. Eventually I figure it out, but I'm sure it does not instill confidence with the people you're about to climb with that you can't even get your harness on right. None the less they trusted me and we approached the first climb. 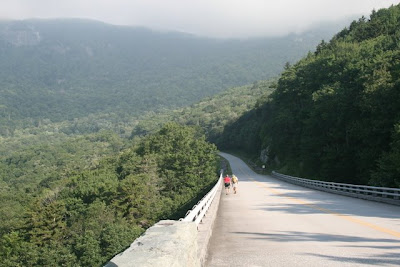 The scramble to the first ledge was an interesting one. Not too difficult but you have to really pay attention, there's plenty of places to twist an ankle or fall on rocks. We worked our way along the bottom of Ship Rock and found the route Edge of a Dream. 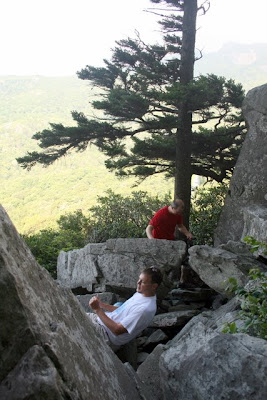 Here's Russ giving me some instructions on how to rappel. Russ is my brother- in-law but he's also a really cool guy. He explains things really well and is very patient. The thing that sucks is, everyone else knows he's cool to and recognizes him. So we had to wait every 5min or so for Russ to talk to some random person hiking the trail that recognized him. I'm selfish, so I was like, lets get climbin' man! He was able to hide long enough from his fans to start the lead on Edge of a Dream. Before he started he talked about various rock features and how he was probably going to set up his equipment for the route. I was impressed he felt I knew the rock climbing vocabulary like what a dihedral and arete and other stuff were. I finally had to fess up that I had no idea what he was talking about. I figured, I better know what that stuff is, if I'm going to second and clean gear. After learning the terms, he started his climb. 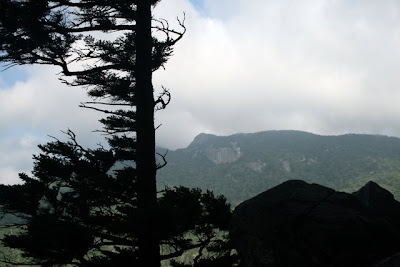 The clouds over Grandfather Mountain looked ominous but the sky really was more blue than gray. What did start building up was a nice wind gust. It was more of a constant wind that I think was close to 30mph. It seemed to really intensify once Russ started climbing. He didn't seem rattled at all and looked to smoothly put in gear. 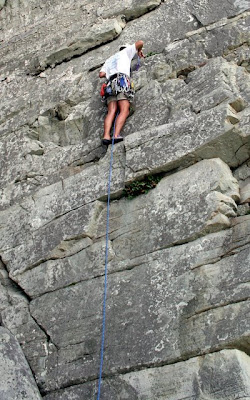 As he made his way to the corner of the route, the wind really picked up an it looked like he was close to being blown off. 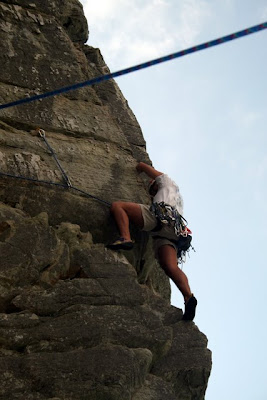 I really watched him closely because I was climbing next and I had to turn that corner too. He seemed to handle it fine and didn't really say how bad the wind was. 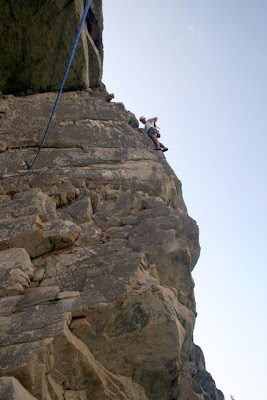 He got to the top no problem, set up a anchor then yelled down, OK KEVIN! I don't know why but I was more excited than scared. I mean the wind seemed bad but how bad could it be really? 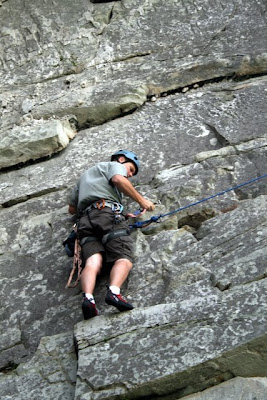 I got to the first few pieces of gear with no problems, the climbing seemed easy and I was feeling more and more confident with every move. In my head I started to get a little cocky. I thought this is a 5.7? I'm killing this, maybe all the gym work is making me stronger, or maybe Pilot Mtn was rated harder..... Who knows? But this is friggin cake.... 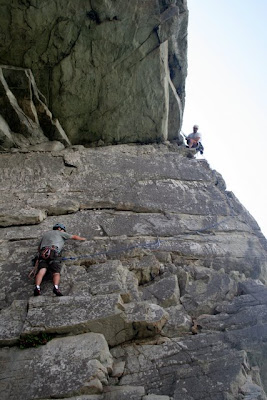 I worked my way closer to the edge and I could see Russ now, the wind started to pick up and now it was blowing hard enough to make me think about it. A few gusts I had to just hang on and wait for it to die down a little bit. I got to the corner and the wind really started to blast me. 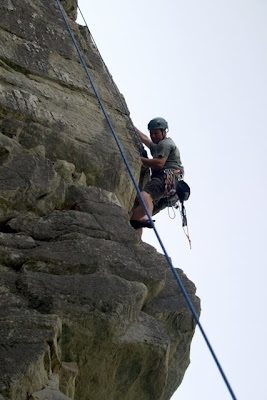 Luckily, the holds were all awesome and I made it up the corner pretty easily. After the first few moves you forget about the wind and anything else that's going on. You just want to get to the top and there's plenty of holds to get you there. After I got to the top I did my first rappel down. It wasn't until I got to the bottom I just realized, not only did I do my first rappel but I also did my first climb seconding cleaning gear. I was pretty happy with myself. 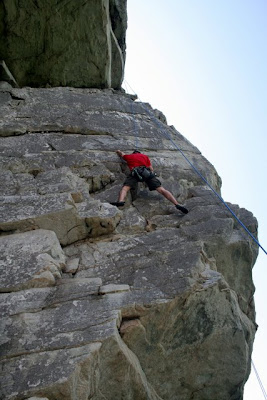 Bill climbed next, taking a line right up the face near the corner. The climb was smooth and clean with no problems. It looked too easy, I was going to have to try that route next. Here's a couple more pics of his climb. 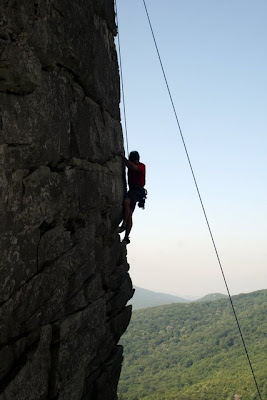 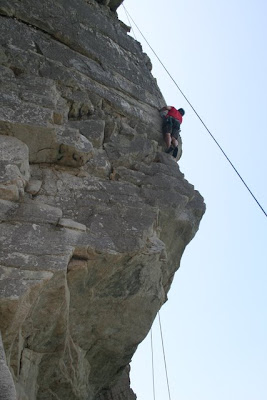 I was able to TR the same route. It was a really fun climb. The wind was still there but not as bad. 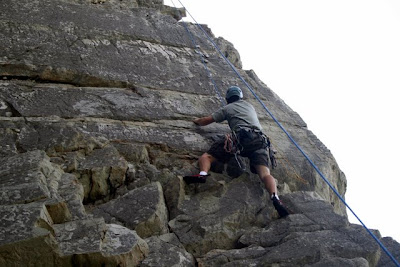 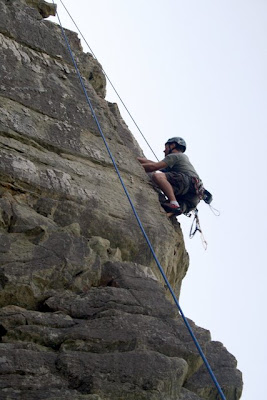 
The next route we went to try to climb was a multi pitch 5.7 called Buffalo Nickel. The hike there really showed off the rock features of Ship Rock. The only word I can think of that describes it is gnarly. 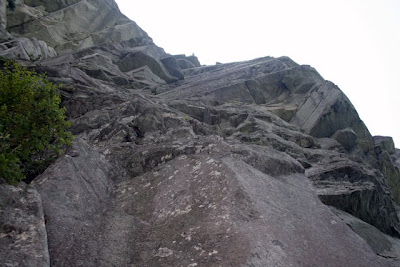 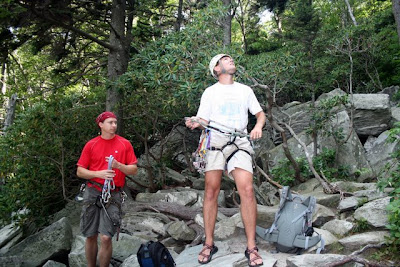 Russ and Bill checking out the route. The beginning was the most sketchy part. You have to pull a decent move to get about 6ft off the ground. There are pretty good holds all the way to the first belay. Russ took the lead and showed us how it's done. 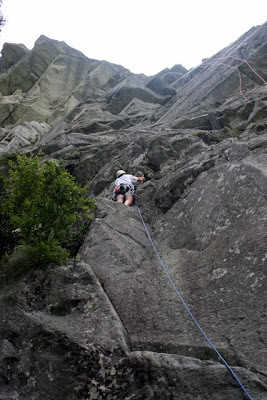 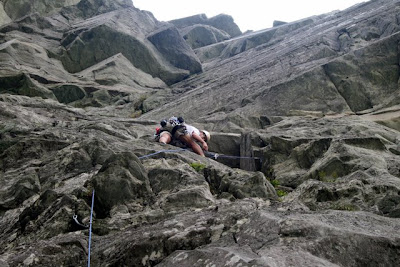 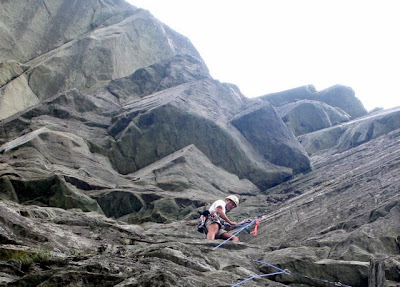 He made it look easy and set up to belay Bill. I was going to climb last on this one. The only bad part about climbing last, you have to wait awhile to climb. The good part, all you have to worry about is climbing. The only gear I had to clean was at the belay station. Bill had to clean and have a rope tail him. It didn't seem to bother him any. 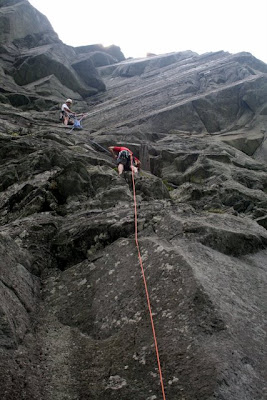 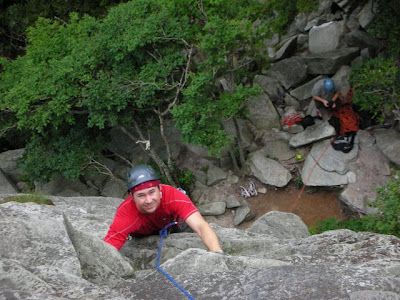 This picture cracks me up, I have two people climbing a 100ft wall and just some rope is basically holding them on. Is this interesting me? Obviously not as much as the pictures I just took, because I'm looking at them in the back ground. At least I'm wearing my helmet. 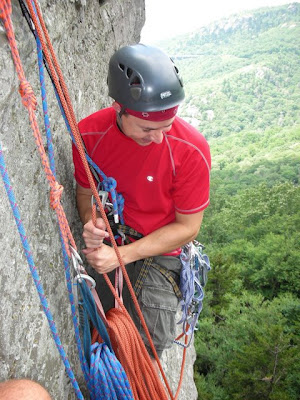 This is good, yeah Bills smiling in this picture. 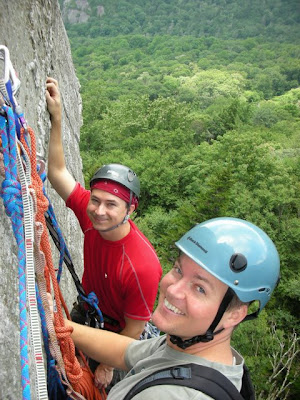 Not so much in this one, I think it's because he had to stand on a crappy little 3inch ledge to belay Russ, and I got to stand where Russ was. It was a nice huge ledge you could almost sit on. It didn't work out like that on purpose but it was kind of funny. Even with the good position you are basically hanging from 2 bolts on a cliff. It sounds scary but when you're doing it..... Well, it's not as scary. I helped feed rope up to Russ while he was climbing and we only had to suffer threw one tangle in the rope. I fed rope up while Bill made his climb to the top. Then I made my approach. Right before I started I heard a little boom..... The last thing you want is to be in the middle of a cliff in a thunderstorm. I looked out towards Grandfather Mtn and saw some clouds, I thought to myself that's probably just a sonic boom. Ten seconds later, BOOM.......... Hmmm alot of planes out today. I started to look at how much rope there was and tried to estimate if I could get to the top before a storm hit us. A few more booms and I knew it was thunder and the storm was getting closer. I tried not to worry about it and made my way to the summit. The climbing was pretty straight forward with only one section that you have to think about. At the very end there is a cave like hole you have to crawl threw. Once you pop out of that you're at the summit. 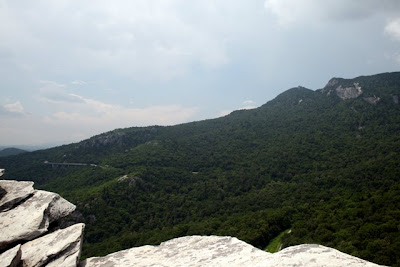 We didn't have long to enjoy the view. A thunderstorm was coming are way fast. When we were watching Bill rappel down, rain was actually being blown up into our face. Kind of a weird experience but cool at the same time. There was a concern to get down quickly but it never got to the point that it was really scary. We never saw lightning. By the time I was about to rappel down the storm had mostly passed us, we missed the brunt of it. We didn't want to push our luck so we still made haste to get down quickly. 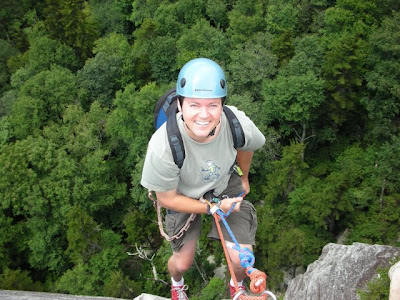 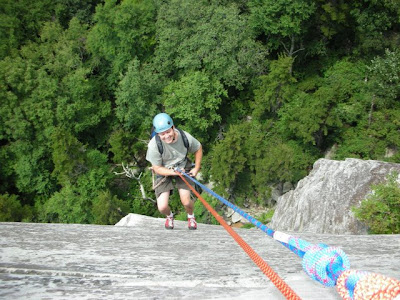 I survived my first multi pitch. It was a awesome day. Ship Rock is a great place to climb with tons of routes. I can't wait to come back. Russ is a great guide and I hope he'll tolerate me climbing with him more often. I don't think I could have been as calm through the whole ordeal as I was without him. While we were leaving we took one last view of Ship Rock from a distance. The view was pretty neat with the clouds in the background. 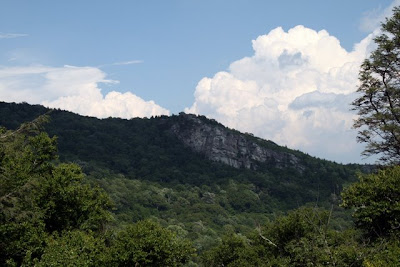 Posted by Feather Chucker at 5:36 PM