Sorry, still no fishing pics. I did make it to a local pond yesterday. I managed to catch a nice 7-8inch bluegill. It was a amazing day. The heat has subsided and the humidity is really down. Yesterday it was 83 with relatively no humidity. It felt like I was in San Diego. Bill sent me some pics from the Ship rock weekend, I decided to do a little post about that. More fishing stories to come, I just got a tip on a pond that supposedly hardly anyone fish's and it has some monsters.

The day after climbing Ship Rock we went to a unknown crag by my brother-in-laws house. I just like to call it Z-crag. I call it that, because it is really difficult and also I think of a french person saying zeee crag. I know it's dorky... Anyways, from the bottom it looks do able. It doesn't seem like it would be that hard at all. 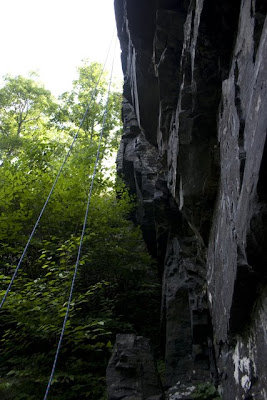 The beginning is not that bad you start with a layback that is pumpy but not terrible. Here's Russ showing how it's done. 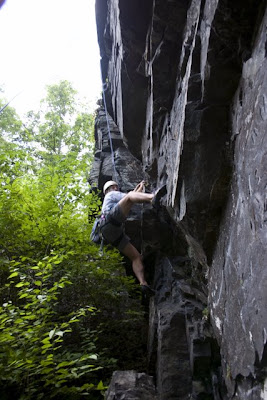 Then after this it gets to kind of a pseudo chimney. It's a dihedral that slowly gets narrow the higher you go. 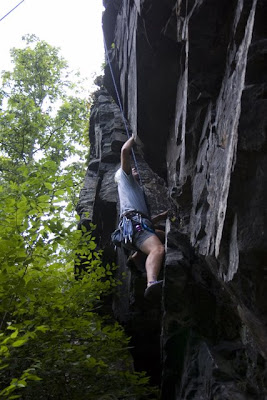 After this, you have to traverse over to a ledge and there is really only a few holds you can use. Some how I was able to do this on my first try. After that I couldn't do it again. Everyone was able to do the route, with Russ being the only one who could do it more than once. Then we decided to try what I thought was going to be the easier climb. It turned out to be one of the most annoying outside starts ever. 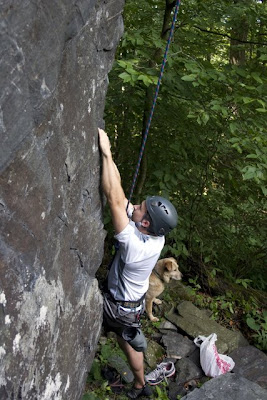 Here's Bill on the beginning, there is a crack to his right that goes pretty deep inside the rock, I tried to go up that. Why are there no pictures of me climbing this? Because I never got more than 3ft off the ground. Even with that low altitude, I was still able to bruise the ball of my foot and jack my elbow up some how. I think it's from the 500 different ways I tried to get up this thing. It really pissed me off. It was fun, but like torture at the same time. You'd find some good holds but they weren't helpful to doing your next move. You really had to commit to each hold. They weren't large holds mostly finger grabs. The foot holds were fine but at strange angles. This was a great route for technique climbers. If you shifted your weight any way that was wrong, your foot would come off. Too tough for me at this time. It's nice to have something to come back to as a challenge. I will get at least 5ft off the ground next time.
Posted by Feather Chucker at 5:41 AM