I have been trying to catch a shad on a fly rod for about 2yrs. The main run heats up around mid March and the best fishing is at Weldon, NC. A boat is pretty much mandatory if you want to get one on a fly rod. My shad fishing luck hasn't been that great. I've tried some local spots with no luck. This year a friend auctioned off a striper/shad trip as a fund raising item for our fishing club. His name is Jim Burchette a.k.a. (Pipes) and he knows the Roanoke River as well as any guide. I've fished with him before for striped bass at Weldon and he always put me on fish. I decided to purchase the trip figuring it would be a great trip as well as a nice donation for the club. The weather lately has been cold and raining. Jim called me and asked if I wanted to go fishing at the end of the week. I wasn't sure how conditions would be since we had a recent rain and the local waters were high and muddy. I decided to chance it and say I'd meet him at the boat ramp at the end of the week. On the drive over I listened to the radio and realized it was April 1st. The theme of the day was talking about different pranks people have done to one another. I started to think about Jim and wonder would he make a prank and say we're going fishing as an April fools joke? It would be pretty much one of the worst jokes ever. First off the location is an hour and a half drive, plus I was taking time off work. I knew Jim wasn't that kind of a person and when I got the call from him that he was at the boat ramp waiting for me it further verified that. When I got there some light rain had started to fall and the temp didn't seem to want to rise above 43 degrees. I wasn't dressed properly for that kind of weather but I tried to make due. One of the guys joining us was name Troy and his nickname was LYM. This stood for Lucky Young Man. I didn't realize how true this was until we fished awhile. Literally two minutes from leaving the boat ramp Jim had us on fish and Troy was wearing them out. He caught fish after fish and I kept getting what I thought were bumps here and there but I wasn't sure. I watched Troys retrieve and the way he was fishing and tried to copy it. I wasn't getting the same results. Troy eventually asked me if I wanted to switch rods. We obviously knew his set up was working. So I cast out now with new confidence knowing I have the right set up. Then I hear, "hey this works...." Troy had on a fish instantly with the set up I WAS JUST USING!!!! I knew then it was about retrieve and not what set up or flies we were using. I was intent on figuring this out and I started to watch everyone else on the boat like a hawk. I quickly became "that guy". Everyone was catching fish but me. Even the guys with me couldn't understand it. I started to feel kind of like I was cursed. The decision was made to move to a new spot, I tried to figure things out and get a new plan of action. Right when we pulled up to the new spot Troy casts out and hooks a fish on his first cast. I launched my flies over in the vicinity of his cast and instantly felt a hard bump. I thought for sure it was a snag or log until the line started to pulsate. I started to pressure the fish and I was afraid I was going to lose it any second. The fish came close to the surface, it's a SHAD! The fish wasn't coming easily though. it dove several times and showed off why it's called the southern salmon. I eventually reeled it in and Jim netted it. I think everyone breathed a sigh of relief the skunk was off the boat. 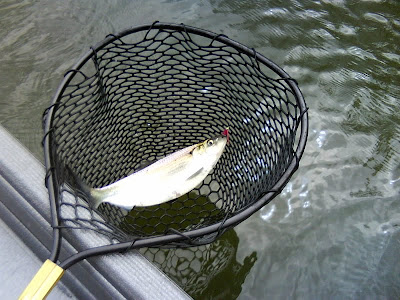 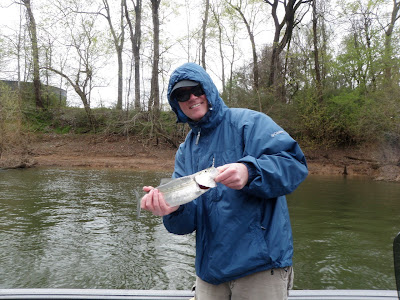 I started to catch shad at a decent pace after that. We were all fishing a small clouser type pattern with a dropper that was a different color. Troy was still catching fish one out of every six casts. I would hook or catch a fish maybe one out of twenty-five casts. Everyone on the boat was hooking up and several times we had multiple hook ups. Jim even landed a double, catching a fish on both flies. The icing on the cake was hooking up with the largest shad of the day for me, caught on a fly I tied. 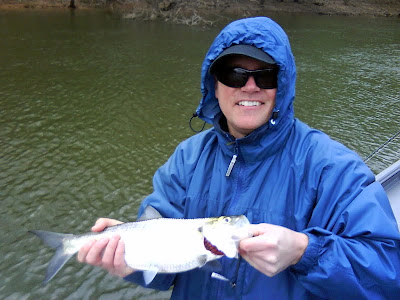 I wanted to stay and keep playing but I have a pregnant wife and daughter at home. I called it a day early but stayed long enough to eat lunch with the guys and enjoy the company for a little longer. I look forward to fishing with them again. The day was pretty much perfect.
Posted by Feather Chucker at 2:03 PM