I was at the monthly TFF meeting tonight and talking with a few people I realized just how many different people I have met and fished with. I would never have met these people with out the existence of TFF. This next post will highlight some of the people I have fished with because of Triangle Fly Fishers. 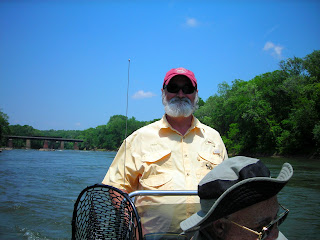 Jim Burchette
The first time I went Striper fishing I had no idea what I was doing. Jim was happy to have a Striper Virgin on his boat. He welcomed me and assured me that we were going to have an epic day. The fishing wasn't the best but the company on the boat couldn't have been much better. The other fisherman sharing the deck with me was Ed Mgee. Jim and Ed had me laughing the whole trip. I'm using that as excuse to why I only caught one fish. I'll never forget Jim's generosity of sharing his boat and knowledge of Stripers with me. Seeing the spawning activity, all the boats in the water, and Jim sitting for hours then getting up for 10min and catching a fish in seconds is something I'll never forget. 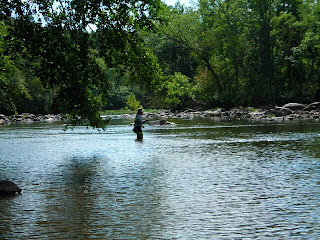 Dave Maeda
Dave is probably the only person I know that could probably fish in a mud puddle and still catch something. He has extensive fishing knowledge and if you ask him a question he'll be happy to share it with you for a great length of time. His fly box doesn't look like your average joes. Dave's flies are neatly packed and seem to be put in a particular order. The flies are specially positioned by size, color and pattern. I've only fished with Dave a few times and all of them have been fun. On the Haw I forgot extra leaders and tippet and was too prideful to ask anyone for some. Dave would have none of it and insisted on giving me one of his furled leaders. That still is one of the best leaders I have ever used.

John Eichorn
Anyone who can make breakfast five feet away from a hornets nest is cool in my book. John was one of the first people that really made me feel welcome in the club. I first really got to know John on a TFF Small Mouth trip on the New River. The fishing consisted of wading 10miles and casting about 5000 times for 3 days to catch 4 fish. It was John's hospitality and presence around the campfire that reminded me, the fun of fishing trips isn't always about the fishing. 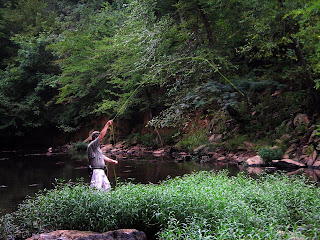 Sam Costello
The first time I fished with Sam was on the Eno. What I noticed right away was his enthusiasm. It was contagious and I couldn't help but have a good time around him. We were hunting Roanoke Bass on one of Sam's favorite haunts. We caught a lot of fish that day and it was fitting that Sam caught the lone Roanoke. 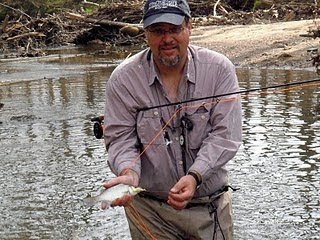 John Barnhardt
John and I fished for white bass on a section that was new to the both of us. In the beginning we didn't catch much but passed the time as fisherman often do having good conversations, dodging thorny briar bushes and keeping our balance while wading. It was one of those fishing days where you talked about a lot of things but can't really remember what any of them were later. We stumbled on to a really good hole and caught quite a few bass. 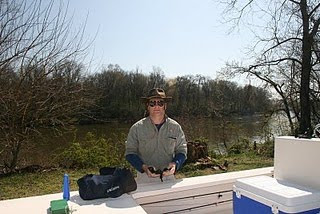 Mike Poe
If you want to know all there is about water skiing Mike is your man. Also if you are ever in his house don't make the mistake I made and call a custom room he has a "BBQ Area". Unless you want to hear a lot of yelling and gnashing of teeth. It's GRILLING AREA. Mike, Preston and I survived a Smallie trip of exhausting wading, wild dogs, seemingly fish less water and even someone dying within a few 100yds of where we were camping. 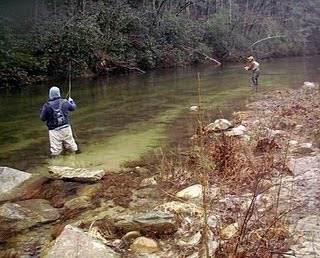 John Leraas and Martin Mayonette
You can get a pretty good impression of some one by sitting in a car with them for three hours. Sometimes you meet someone and you know they are just genuinely a nice person. That's the impression I got from John and Martin. We fished a stretch of Wilson Creek on a chilly rainy day in January. John Laaras is an awesome fisherman. Both times we have fished together in about 5min he had a fish on the line. He's one of those people who is humble but has the knowledge and skill to be formidable on any water he fishes. I look forward to many more fishing trips with these guys.

Jim Coveny and Paul Parks
Jim work at Great Outdoor Provision. Unfortunately he's the only one that knows a Wooly Bugger from a Pheasant Tail there. Paul is a great guy who I've fished with a few times and his company is always a pleasure. Jim, Paul and I hit the Mitchell on a over cast weekday and tore it up. We found a few runs that had stocked DH fish just stacked and willing to hit almost anything. 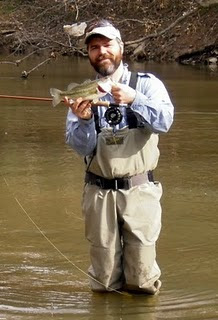 Brian Thomas
Brian has invited me on several occasions to fish with him. We were going to fish together for Striper last year but ended up on different boats. This year we got together to chase some white bass on the Eno. The fishing was pretty slow but we made the most of the day with humorous chats and the occasional fish here and there. Brian was one of the first people I met that made me realize there are people out there that are just as obsessed about fly fishing as I am. It's also fun to have as much fun talking about our kids as we do fishing. I'm sure Brian and I will have many more fish stories to be a part of. 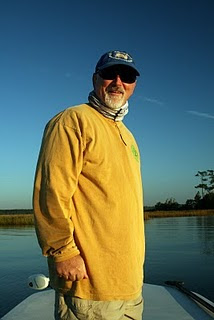 Preston Mcqueen
Some people you're lucky enough to call your friend. That's how I feel about Preston. He is a great example of what a gentleman, father and friend should be. He is one of the most generous people I have ever met. He never complains about donating his time to TFF and other activities. Preston and I have never really had an amazing fishing day. I still never turn down a chance to wet a line with him.

Posted by Feather Chucker at 6:58 PM