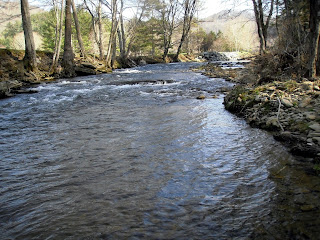 For spring break my wife and I decided to go up and stay with her brother and family in Boone. I was looking forward to seeing Kora playing with her cousins. In between the hiking, family fun and general all around relaxing I went fishing. I went to some of my old haunts. When I first stepped in the water I looked around for any sign of bugs. 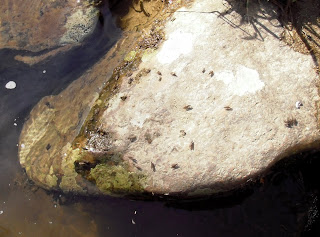 On the sunny side of the rocks you could see little black caddis. I have never seen caddis this small before. I scanned the water to look for fish rising but the water was pretty quiet. I tried tying on a stimulator with a dropper and fished that for awhile. The weather was amazing. Usually in the Mountains in April you aren't wearing warm clothing. The temp was in the 70's and you could get buy with a t-shirt and shorts. The water was still way too cold for wet wading. Even though it was high because there was still a lot of snow run off the river ran clear. I hiked a long the shore and where ever I looked there were caddis scurrying across the rocks. I was waiting to see a spot where fish would be stacked up waiting for bugs to fall in the water. I walked a pretty good stretch and never saw fish rise or even follow my flies. I tried several fly combos but I never felt even a tap. The day got worse after I slipped on a boulder and my leg was caught in between two rocks. I didn't get hurt really bad but it left a good mark on my leg. To top it off my Korker boots finally bit the dust. The toe cap came off and my sole would not stay on my boot. I decided to call it a day. It had to be one of the strangest days of fishing. Tons of bugs were hatching, I finally had the right flies to match the hatch but I didn't catch a thing.

DH Redemption
The next day I made it to the Foscoe Fishing Company and picked up some new wading boots. I was surprised to find that Orvis Wading boots were the cheapest boots they had. I felt good about getting out of there for under $75 and after talking to the salesman there I was given some good info on where some trout were stocked. I headed to that location late afternoon. I dropped down into a section that didn't have very easy access, I figured it might have seen less pressure. I worked my way upstream trying runs, pools and eddies. Nothing again, no hits, no follows, no sign of life. I was beginning to feel deja vu and to top it off I saw some of the same caddis I watched cover the rocks the day before. As I came to a run where I was confident there was fish I finally had my first taste of action. I was using a wooly bugger and I let it swing in the current as it was finishing its swing I felt a tap tap then noticed a splash at the end. It was a fish trying to hit the bugger but never fully committing. I tried several more swings and received a few taps but never a hammering strike like I'm used to from stocked fish. I messed around a little more then I noticed something peculiar.

Whenever I raised my rod up to back cast and the bugger raced towards the surface 6/10 times I would see a splash, like a fish going for it. I wondered if the fish thought the buggers was a minnow and they were chasing it to the surface. I started to incorporate the bugger rising in my swings and that was the ticket.

I caught a few fish here and there on the same technique. Then the fishing slowed down considerably. I also ran into some spin fisherman. I decided to head back and work the water all the way to where I dropped in. The raising technique I was using before wasn't very effective, nothing I had tried prior to that worked with buggers was giving me any success. So I decided to try something I've never really done before. I'd throw upstream about a 45degree angle or even sharper upstream then I'd strip with the current. I thought of the presentation Lee Cook gave at our last TU meeting and tried to put some zip in my strip. This technique turned out to be the best of the day. The sun was setting behind the mountains and fish were rising here and there. I was hiding myself in the shadows of the Appalachians and just focused on strip........... strip..... strip strike! Fish on! This went on for about an hour. The fish were hitting very subtle. It could have also seemed that way because I was fishing with the current. I kept working my way back then looked at a spot where a big pool was under a tree.

Whenever you fish a stream you always see a spot where you feel a big fish should live. This was exactly one of those places. I launched my bugger into the pool and slashed it a few times. I felt the familiar pull and it seemed the same as before until the fish turned and went downstream. Not only that but it was taking line. The fish spun and flashed showing the broadside of the fish. It was a biggun. I instantly kind of panicked and started to wonder if my knot was gonna hold. I had been catching fish steadily and never retied my knot. Lucky for me the fish went up stream and I put heavy pressure on it. As it got closer I noticed its coloring. A BROWN! I've never caught a really big brown. This made my anxiety even worse I had my net ready and swiped at the fish. The fish avoided the net easily and made a swift run upstream. I was sure my knot was gonna break any minute. With the fish going up stream and the pressure of my rod I was able to tire the fish enough to scoop him up.
The fish was easily the biggest brown I have ever caught on a fly rod.

I could have left and been happy or even stopped fishing for the rest of the week. But I fished on until it was too dark to see my fly. Catching fish on almost every other cast. No more monsters but I felt spoiled already.

Could Have Been A Lot Worse
My brother in law Russ and I went to a section of the New River we hadn't fished before. After parking the car and surveying the situation we realized the opposite side of the river was the better location to attack many of the runs. The water was running high and swift and right in front of us was an old wooden bridge. When we walked closer I didn't like the looks of the bridge. Russ felt pretty confident that as long as we stayed on the steel beam holding the bridge we'd be fine. Russ made his way across first. I took a picture hoping it wouldn't be the last one I'd ever take of him. 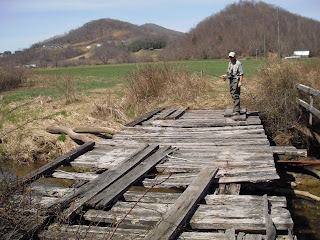 He said some of the boards are kind of spongy but it seemed pretty solid. I made my way cross and at about the second board I understood what he meant. Kinda spongy? They were pretty much like balsa wood. I scampered across the beam as fast and safely as I could. Then when I got about two feet from Russ I thought it was safe enough to move off the beam. The next scenario was just a flash of images. I heard a crack saw the bridge for a split second then I was on my back looking up at 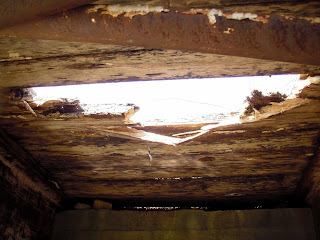 this hole. A tree had broken my fall and as I moved off of it to make sure I was still in one piece I noticed my gear every where. My rod some how just came a part at one of the sections and managed to not snap. My camera was under water and the case was flung about four feet away. My hat was in some bushes right behind me. I guess what had happened is I came threw the bridge and t-boned the tree underneath it. Luckily I didn't hit my head or lose anything. Here was Russ's view.

When something like this happens, especially with guys you can't help but laugh. Once Russ knew I was OK he was dying. I had to start laughing to because the whole event was pretty funny. What really annoyed me is when I looked at the water a few feet from where I fell I could have easily waded across it and avoided going over the bridge all together. It's a lesson learned and I won't be going over any rickety old wooden bridges any time soon. Even after that we continued to fish and had a fun day. The fishing was tough. Your drift had to be right on. I love this kind of fishing. It's really fun because you have to have some skill to catch the fish. Your cast and drift have to be just right and it's the difference between getting skunked and catching something. The whole day the only other souls we saw on the river were 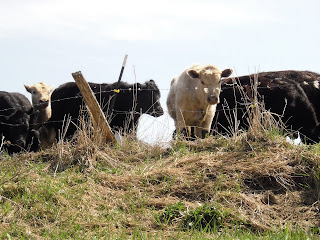 these cows. This section is going to be one I check out probably every time I come back to Boone. I will just choose my crossing points more effectively next time.
Posted by Feather Chucker at 7:14 PM