During one of our clubs tying sessions I heard a rumor about a local lake. Apparently the crappie stack up in the spring. It seems that my fishing opportunities become less and less frequent. So when I have a chance to fish I have a hard time trying a place I don't know about. My daughter has been trying to get me to take her fishing since the last time. I figured this would be a great time to check out new water and take her fishing. The morning was chilly and while rigging up the rods we ran into the guy who told us about this place. We never planned on meeting I guess it was meant to be. We headed down to the water and in the first 5 minutes a fisherman had a fish. It only took me a few casts to land a little crappie myself. 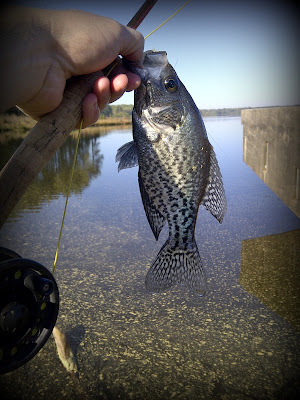 I tried to get my daughter to use the fly rod but she was adamant about using her Dora pole. I finally gave in and put a small marabou jig under a bobber. I cast the line out and let her do everything else. Her first couple casts didn't get any results. Then I had her try reeling really fast then stop. Reel fast, then stop. The bobber twitched and moved after she did that. After a fast twitch the bobber went under and I yelled REEL FAST!  She did and the bobber went under for a second then came up and stopped. Right when I said "I'm not sure if a fish is on..." A fish shot out of the water right at our feet. The fish danced on the surface and I just kept saying reel it in. She finally had a fish that she felt she caught herself. 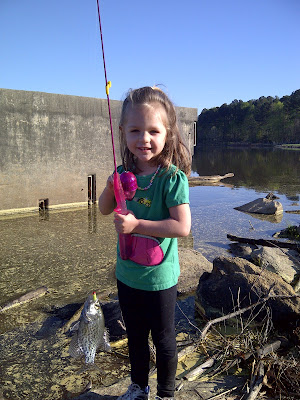 Her fish kept getting bigger and bigger. I'd cast the line out then glance over and she'd be reeling another fish in. Every now and then I'd have to remind her, reel fast then stop. Then another fish would come to hand. 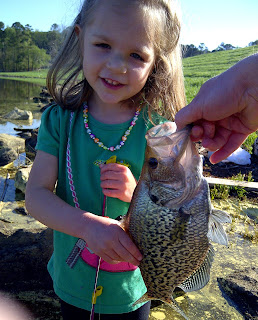 I kept joking with her that I think she's catching all the fish in the lake. I was thinking maybe I was setting her up for disappointment. These last couple trips she's caught a fish with in the first 10min. What is she going think when the fishing is slower? Hopefully those trips won't come any time soon. This day was amazing. I was so proud of her. Every fish she wanted to pet and this last monster I just had to have her lip. 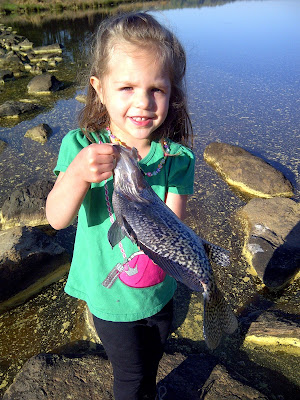 The fish was so big she couldn't hold it with out two hands.
On they way home she asked why she caught all the big ones? Maybe I need a Dora pole.
Posted by Feather Chucker at 3:33 AM

Email ThisBlogThis!Share to TwitterShare to FacebookShare to Pinterest
Labels: Crappie, crappie on the fly, daughters crappie