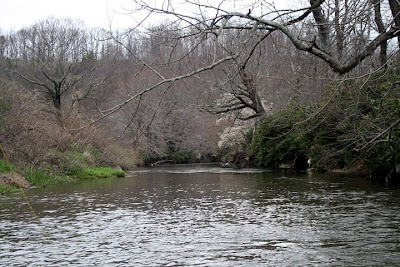 Last week I took a few days off and headed up to Boone for a long weekend and some quality time with the family. The dilemma was where to fish. It was spring break and I figured the hatchery supported streams would be hammered. The DH would probably be pretty crowded as well. Not on a weekday, so that was an option. I decided to go with a stranger alternative. Try the New River which was basically wild fish. I headed to the river with low expectations. I've never had an incredible fishing day there. I gathered my gear and made my way to the river. I was pleasantly surprised by not only the water clarity but the water level. It was higher than I remember. Some renovations had been done to the banks to prevent bank degradation. I figured this section would be void of fish and I was correct.

I worked my way down stream and found some runs that looked perfect for holding fish. I didn't get a hit or see a flash. I started to think maybe this stream was dead. The sun started to really beat down and the air temperature warmed considerably. I continued to make my way down stream and I noticed more and more bugs hatching off the water. As I made my way to one fast section I could see fish hitting the surface here and there. I worked my way down and watched them for awhile. They were hitting pretty consistently. I couldn't tell what they were hitting. I tried a caddis and received a few hits but I couldn't keep a fish on. I worked further down stream. Now bugs were coming off even more and the surface action was getting intense. I caught a few bugs that flew past me in my hat. Two gray caddis. They were fluttering everywhere. It was one of the best hatches I've fished in. Fish were in a frenzy and rising about every 30seconds. I cast my caddis to where I saw the rises and instantly had a hit. I still could not keep the fish on. I figured my liter was too long.

I shortened the leader and kept after the rising fish. I eventually caught a nice 6inch bow. I was so proud of myself. My day was made. It wasn't over though. I continued to catch fish throughout the day. The fishing just got better and better. I ended up landing about 5 fish. I had on and fought at least 10 that got away. I had forgotten how feisty wild fish are. They did every trick in the book, they would run down stream, jump at least 3 times and still wouldn't give up once they got near your hand. I left the river energized and happy to have a great start for the weekend.

I went back to the river on Sunday, It was nothing like the day I had just a few days prior. No surface activity, it was a lot colder and there was not as many bugs flying off. The river looked like it was lifeless. I knew the fish were there but they were not hitting anything. I eventually went back to the caddis and managed one fish. It was a reminder to cherish the really great days that seem too good to be true.
Posted by Feather Chucker at 5:56 AM