I fished the local pond on Sunday and the fishing was pretty good. There was catfish hitting all over the place. There's bream schooling everywhere as well. I caught two catfish and missed about 5. I decided to go back today. I managed to catch a bluegill and this catfish. 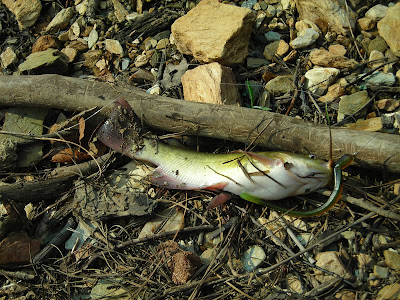 It wasn't that big but still fun to catch. I might go back this weekend and try to get a few more. There were some other people fishing and one kid looked like he had a pretty good size fish on. I came off before he landed it. Here's more info on the catfish

Identification
In North Carolina, there are five species of catfish listed as bullheads —the brown (pictured above), yellow, black, flat and snail bullhead. Although these catfish are difficult to identify by species, they are easily separated from other catfish by their lack of a forked tail. Color varies depending on species, but all are characterized by a robust, squatty appearance. Fish experts consider the white catfish a bullhead as well, although anglers can identify it by its white appearance and moderately forked tail.

Habitats and Habits
Bullhead catfish are extremely abundant in many North Carolina streams, rivers, ponds and lakes. They tolerate a wide variety of habitats, including very muddy water and even low oxygen levels. Although their numbers can be extremely high in many bodies of water, they usually don’t get the attention of other catfish species because of their smaller size. However, they make excellent table fare and should not be overlooked, especially for anyone that enjoys easy, relaxing fishing.

Fishing Techniques
Bullhead catfish can be caught by many of the same methods used for other catfish. Worms, minnows, scented baits and hellgrammites fished on or near the bottom work well. Henry David Thoreau probably put it the best when he said, “they will take any kind of bait, from angleworms to a piece of tomato can.”

NCARP Minimum Requirements: None yet established