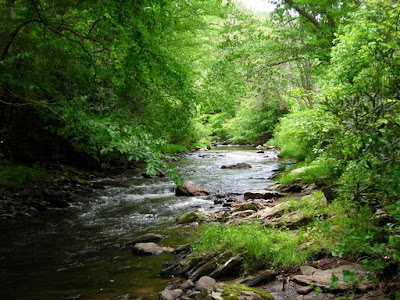 We started fishing this small creek in Ashe County. The weather cooperated and it threatened to rain but never did start. The water was pretty low. It averaged between 1 and 2ft and was super clear. This made it good for trout but hard for fisherman. It was difficult to sneak up on the fish because of how narrow the creek was. Casting was a challenge. My friend Tommy was with me and it was his first time trout fishing. He figured out right away that you have to look before you cast. Within minutes he had his first tree fish. 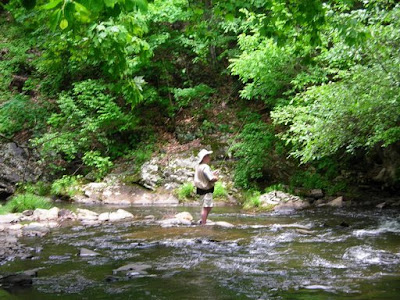 Unfortunately, he didn't have any boots either. I had suggested for him to invest in some felt soul boots. He found some felt souled pool shoes that were $15. After a few steps in the creek his face had a grimace of pain and he said "I can feel every rock, it feels like I'm barefoot." I knew he was in for a long day. He spent his day painfully moving from rock to rock while trying to find a sandy bottom to rest. I luckily had felt souled boots, so I could move along at a quicker pace. I worked pools and small runs. The fish were there but really hard to catch. I caught one fish right away but it was a hour or so before I caught this next one. I decided to see how my new Brodin net worked out. 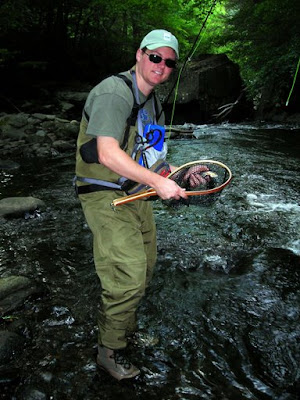 The net worked great but I can still see that I'm going to have the same problem I've had with other cloth material type nets. When you catch a trout they never calmly slide into the net. They're usually thrashing around. Your fly is in the corner of their mouth and the hook is usually some what exposed. This can cause the fly to tangle in the net. So you spend more time releasing the fish. Smashing down the barb on the hook helps but it can still get tangled. I only managed two fish all day.

I heard about some small mouth bass that can be caught on the New River so we decided to try our luck. It only took about 10min to get to the New. Fishing spots were scarce. We finally found a place to throw our line in by a church. It was a pretty section but there was no sign of life in the water. 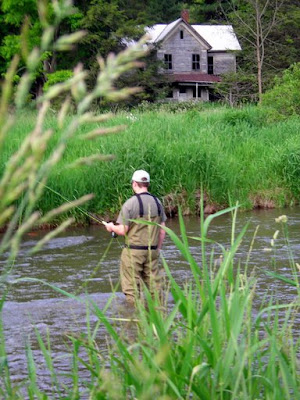 We fished this spot for about 20min then decided to look for another spot. We didn't find any decent access spots on our way back to Boone. I decided to try our luck at Valley Crucis Park. 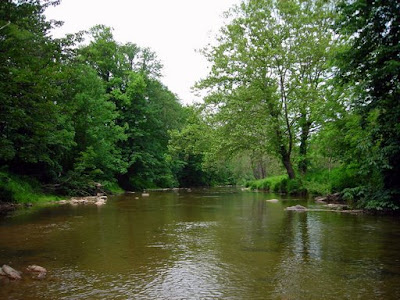 We pulled in and the parking lot was pretty empty. I read a report that the river was just stocked a few days ago. I was surprised it wasn't more crowded. We made our way down to the creek and I saw a few people fishing. I found a big pool that had a bunch of fish in it. I threw a white bugger I had tied and saw about 5 fish hit it, then one finally was hooked. Cast after cast I watched fish swirl around my fly or take little samples of it. None of the fish were super aggressive. Tommy didn't have much luck. He decided to try the pond in the park and was having some success with some bream. After a couple hours we decided to call it a day.

Sunday we woke up to a storm and some rain. It gave us a chance to get some breakfast. I decided it would be a good idea to fish the park again since the fish were obviously there and it's a good place for beginners. The sun was higher in the sky and you could see even better into the water. The rain had stopped and the weather was perfect. I went to the same pool I had fished the day before. This time there was other fisherman there. You could also see about 50 fish stacked near a rock in the middle of the pool. I threw a bugger in there and instantly had a fish on. It came off pretty quickly. I saw the same behavior I observed the day before with fish circling and tasting the fly but not swallowing it. I figured they had seen so much thrown at them and were so stressed they were not that aggressive. People with spinning gear were catching fish pretty regularly but even they had the issue of fish just playing with their bait. I caught a few fish and Tommy painfully waded from pool to pool. He was learning how to spot the fish in the water. He started to realize that you needed to drift the fly into the fish. I forgot he had no experience trout fishing. The behavior of trout, presentation and fly selection were clueless to him. I spent the day losing more than I caught. I hooked plenty but my fly would either break off or the fish would spit the hook. Tommy managed to hook a few. The water in the park was disappointing. The fish were concentrated in these herds in only about a foot ball field distance of stream. They didn't seem to spread out. They would stay compacted together. It was fun but got old really quick. It was like fish in a barrel. You didn't have to work for the fish and it was a matter of casting until one either hit out of frustration or you found the trout that was so hungry it decided to hit. I'd rather hike and fish than stand in one spot throwing into a pool of scared and stressed trout. It was a fun day regardless of the fishing conditions. I think Tommy had a good time too. 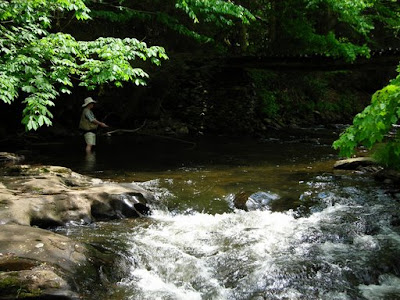 Posted by Feather Chucker at 5:21 AM