I visited a pond I rarely fish to see how it faired after the storms we've had recently. The water was very clear with a tea stain to it. While walking the banks I spooked two nice bass in the shallows. I worked the area with a small popper and caught a small 4inch bass. A few casts later a good size fish rose under the popper and sucked it in. I set the hook and after a few seconds the leader snapped. I didn't have much time to keep fishing and decided to come back later and target the larger bass.
Early evening there was a consistent 10mph wind that would not go away. It put some disturbance on the surface and made visibility difficult. I figured the fish would have a hard time seeing me as well. I worked the same area I fished in the morning this time with a large popper. I usually don't fish poppers larger than a size 2 because of how horrible they are to cast. This one in particular had terrible wind resistance. I was fiddling with my reel with my fly about 30ft from me off shore. Out of the corner of my eye I saw this gray monster rise up and suck in my fly. It was so fast and unbelievable I didn't have time to set the hook properly. The fish was on but it wasn't hooked right and before I could really put leverage on the fish it came unbuttoned.
I think the whole situation surprised us both because about five seconds after my fly came back the fish jumped like it was still hooked. The fish was massive and I thought maybe I missed my chance. Around ten casts another nice bass came up and sipped my fly off the surface like a large trout. What I've noticed about big bass is they don't jump crazy out of the water then hitting flies. They are so smooth with their takes it makes me wonder how many I've missed in my life. They are so efficient with their energy it's like just the tips of their jaws break the surface when they suck the fly down and the rest of their body stays submerged.
I put as much pressure as I could and really didn't give the bass a chance I was making sure the only way I'd lose this fish was if the line were to break or my rod snapped. The bass summersaulted under water and I could tell it was massive.  The fish jumped a few feet away and I couldn't see my fly and knew it had to be lodged pretty good. I grabbed the leader and pulled the fish to the shallows so I could lip it. My whole body was shaking, when I looked in the fish's mouth it made the sz1 popper look like a 14. 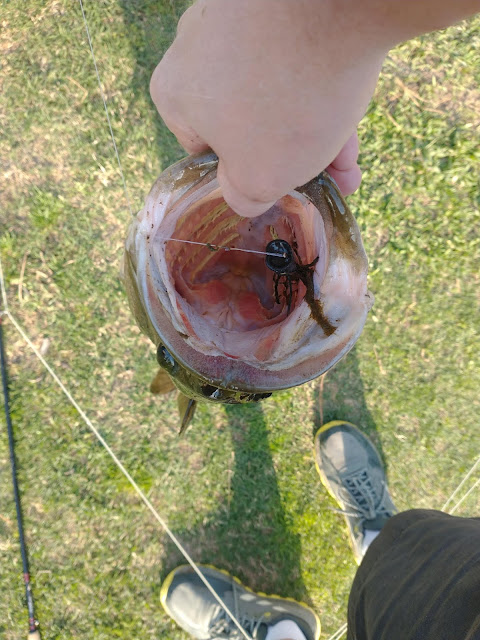 Even with the fish in hand I was still shaking and in disbelief. This is probably the biggest bass I've ever caught on any kind of gear. It's strange to go from catching bass that are around two pounds max to this. 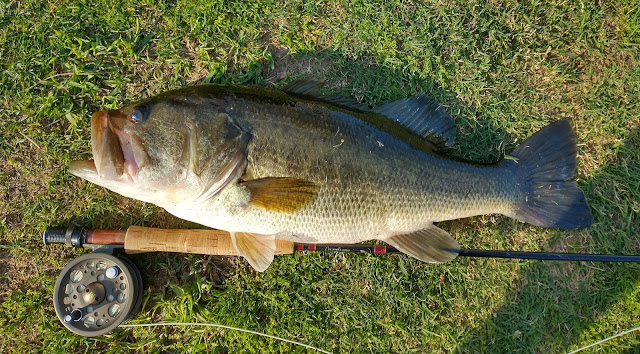 I didn't have a measuring tape so I laid the bass next to my rod to measure it later. The fish was give or take 24 inches and I'm guessing some where around 6lbs.
The fish swam away barely phased by the whole experience. I tried to compose myself and fish the area more and seriously a few casts later I hooked another big bass. This one was close to the same size and hit a few feet of shore. Part of me wondered if it was the same bass I just released. It stayed on for about ten seconds before jumping and spitting the hook.
After that I didn't get a hit and there was not much else going on but the occasional rise of sunfish. Bass have always been a little mysterious for me they are either impossible to catch or easy. I can never figure them out. All I can say is big flies do seem to catch big fish.
Posted by Feather Chucker at 6:39 AM