The Crud and Guiding

My family would always call the cold they got late in the year The Crud. I thought maybe I'd be lucky and avoid it altogether this year. Nope, it got me. It started with some post nasal drip action but now it's moving into my chest. It hasn't zapped my energy yet and I thank god for that. As I get older it seems like my ability to shrug off colds gets harder and harder. I haven't been fishing much even though the weather has been awesome. I did get out one weekend for a guided trip. It was my first time really guiding some newbies and I made several mistakes that I'll learn from for future trips. The first was that even if you go to a place where you know for 100% certainty there are fish that doesn't mean people will catch them. Just because you know how to catch fish in a certain area doesn't mean others can do so. It also doesn't mean you can teach others to do so either. What I really learned by this trip was that I fish a certain way. There are specific things I've done over a period of time that have now taught me a technique. Teaching this technique to someone else is almost impossible. They'd have to go back through the years and have the same trial and error I had. They'd also have to think the same way I do. So what do you do in situations like this? You have to get really generic and figure out what people can and can't do. Can they cast 15ft? Do they have line control and can they present a decent drift? Do they see the fish and understand what their fly is doing? Have they ever waded before? The list goes on and on. All of these are factors in success or being skunked.

We fished two pools that had tons of fish in them. Who knows how many flies these fish had seen in just a few days. They still hadn't learned to be afraid of people and many of them had been caught at least once. My clients didn't have polarized glasses which made the day very interesting. I kept pointing out things and doing play by play of what the fish was doing which was pointless. Fishing without polarized glasses is almost like fishing blindfolded. You can do it and it may work now and then but it's not very effective. The second thing I learned is even if someone wants to use their own gear inspect it. Better yet rig it up yourself. We had talked about this trip a few weeks before going. Our club was giving away spools of tippet. I was asked what would be a good option for the trip. There was no 5x so I said you might want to grab some 6x. This wasn't the smartest suggestion. 6x is great for 10inch or smaller fish but if a good sized fish hits 6x just right it will snap it like a spiderweb. I watched this happen twice before I switched the 6x with 5x. Even with all the mistakes there was some success. 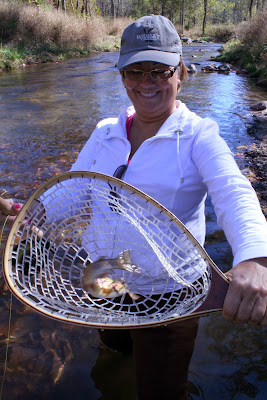 This fish was caught after the first 20min on a beadhead soft hackle I tied. At the time I was proud of my fly tying skills as well as fishing tutelage. The next 3hrs however I was severely humbled. 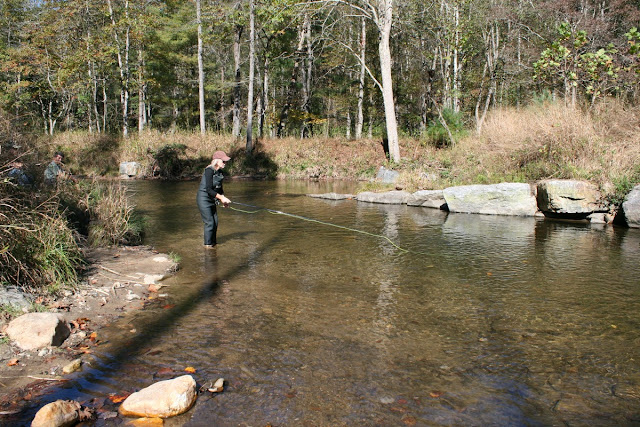 I was second guessing a lot of what I knew was right. I figured we should move but I was afraid to leave a place I knew had fish. The better decision would have been to find other water. These fish had seen plenty of fishermen. I also didn't take into consideration the expectations of my clients. They were the type of people you want to fish with. They didn't care about the fish. They were happy enough just being outside. It was a beautiful day. 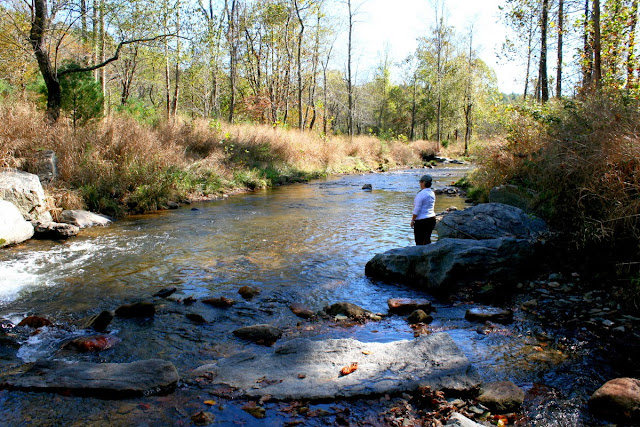 The trees helped by showing their fall colors. I decided to try fishing myself and I had several follows but couldn't entice a bite. We left the day with only one fish caught. I received several compliments about the day and requests to go again. I'll definitely handle things different the second time around.
Posted by Feather Chucker at 10:02 AM