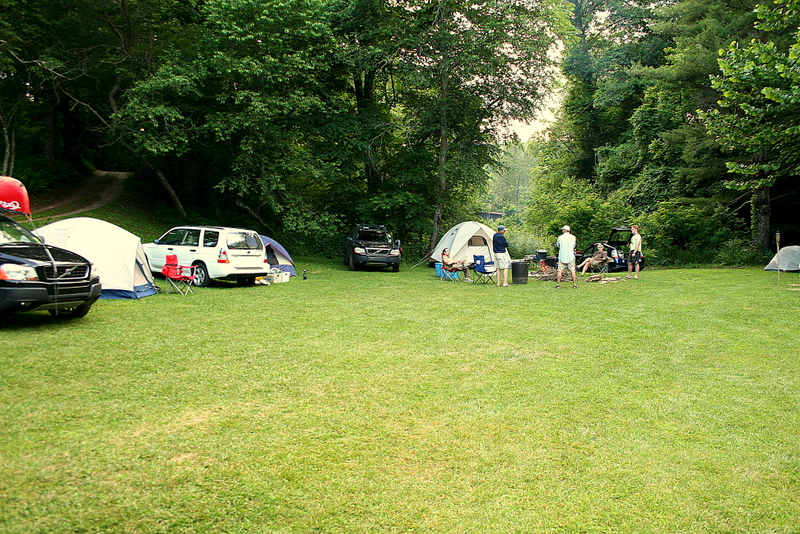 Last weekend was the TFF Smallmouth Trip.  I had a great time but the fishing was on par with the other trips.  A few fish here and there but most of the fun is had around the campfire.  We stayed at a new campground this year and the accommodation's were nice.  The group site had it's own campground and at first glance I thought it was kind of sketchy. 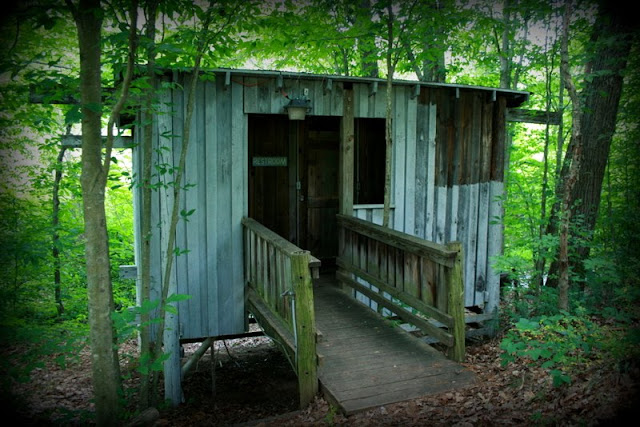 With a more thorough inspection I was amazed at how nice it was inside. I was expecting a wooden bench with a hole or some trough style urinal. This was a lot more welcoming. 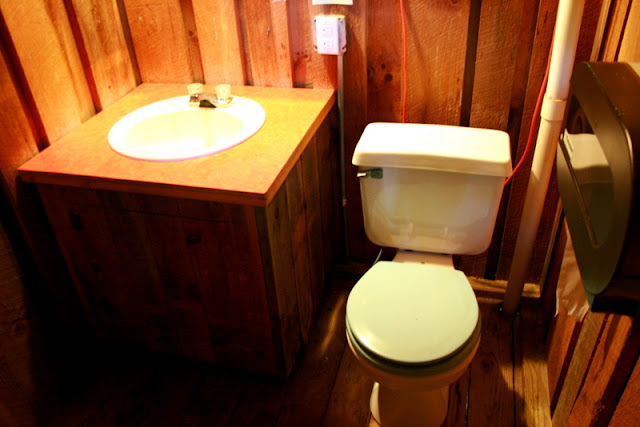 Don't get the wrong idea. We were still roughing it. The bathroom was pretty open to the elements. The windows had nothing covering them and the door was held shut with a sliding bolt. There's only so many places you can go to the bathroom and smash a spider crawling towards you at the same time. Now that's camping.

The first day I went on a float trip. It was supposed to be mainly a fishing float but it turned into a 9mile canoe trip. The water was so shallow we had to constantly stop fishing and navigate around submerged rocks and ledges. It was kind of exhausting. It's been a long time since I've done a canoe type trip so I still enjoyed myself. Luckily there was only one class II rapid to contend with. The bad part is the canoe we were using was a 16foot flat water canoe. It was pretty heavy and dragged constantly. One of the funniest comments was when my buddy said "I bet the bottom of this canoe looks a lot different then when we started." We got stuck a few times and used the opportunity to fish or eat something. The next day some friends and I tried our luck trout fishing the Helton. 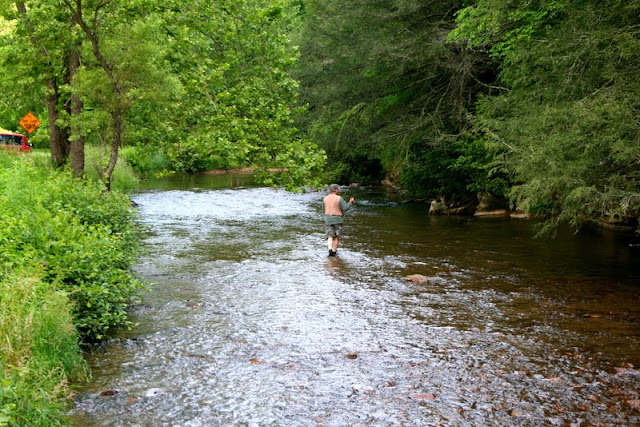 We got to the river early but most of the spots were taken. I couldn't figure it out until someone mentioned it was fathers day weekend. Delayed Harvest regs ended in June and the meat fishermen were out in full force. They were the only ones we saw catch anything. I saw a few fish but it was only when I was wading. The fish seemed to be swimming and knowing they are running for their lives.

My wife and kids were visiting my father in law about 2hrs from where I was camping. I really wanted to spend time with them for fathers day so I made a trip up. My brother in law and his family were there too so that made the trip even more worth while. It was nice to relax and just chill out. My lack of smallies was still on my mind and my father in law has a friend that owns some land with a section of creek on it. I asked if he wanted to head down there. My father in law just got a fly rod a couple years ago and has barely used it. We headed down to the creek and I really like fishing with him because he just enjoys being outside. He wants to catch more fish than me but he loves the experience. I think he's a little intimidated when it comes to fly selection. He always asks for my advice. There was a ddh leach from the last trip and I figured that should be good as anything. The stream was so clear it almost looked as though it was dry. It's hard to explain. It was some of the clearest water I have seen and that includes the glacier fed streams in the Sierra's. The fish could see me coming a mile away. The great thing about this section of water is there is almost zero pressure. The fish have not learned to associate people with danger. I had a few fish right in front of me and I could experiment with different flies until I found the proper one. The right fly turned out to be my navel lint pattern. I realized how much I am influenced by the Internet and what I read. I've read so many articles and watched so many movies about fly fishing for smallies with poppers. It looks so much fun and seems so effective. I've also heard clousers work and they are one of the most go to flies for smallies. I have never had much luck with either one of those. What has worked best for me is crayfish style patterns. I would say maybe it is where I'm fishing. But these patterns have worked for me in the Shenandoah and New River. I've also seen fish behave the same when it comes to these flies. I'm not sure if it is the color or the action but I have used similar flies like black wooly buggers with rubber legs and I get follows but not the same reaction. I was able to catch some fish on a top water fly and if you've been reading my blog lately you can probably guess what it was. A chartreuse stealth bomber. The great thing I'm learning about smallmouth is I don't need a huge selection of flies. The fish seemed to be more interested in retrieval and fly style or color. The fish near grassy edges wanted a fast retrieval. The ones near riffles or runs wanted a dead drift. The fish hanging near the bank in slack water wanted a floating fly that just sat there. It was fun figuring out what the fish wanted and it was probably one of the funnest times I've had fishing. The neatest thing was when I gave the navel lint fly to my father in law and he caught his first fish of the day. He went on to catch a few more and talked all the way home about how the smallie fought on the five weight. A great end to a great fathers day.
Posted by Feather Chucker at 5:54 PM