Was This Meant to Happen?

Since I have been doing so much small stream fishing my 8wt hasn't gotten much love. I decided to break it out and jump on some water in between thunderstorms. I was a little torn where to go. There was a pond where I had hooked a large bass I wanted to get back too. I really wasn't sure I wanted to drive that far plus the weather was so unstable. I decided to hit a pond closer to my house. I've always heard after a rain that this pond can be amazing. I was excited and went to get my gear ready when I noticed none of my stuff was in the car.  I don't know how I didn't notice this when I put the rod in the car.  I guess because my stuff is almost ALWAYS in my car. The reason it wasn't this time is we recently took a trip to the mtns and drove my wife's car. My stuff was still in there.  I slammed the hatch and mumbled some things under my breath while I sped back home. Should I even go now I wondered? I figured this may be a sign to hit that pond where I hooked the huge bass. I grabbed my gear from my wife's trunk and headed to the other pond.  The weather seemed like it was going to hold off long enough for me to get some time in. When I started to get my stuff ready I grabbed my reel and noticed sinking line was on it. Then I started to look in my backpack and all around the car.  My reel with floating line wasn't there. I had my 3wt reel with floating line on it but would that really work? I guess we'll find out I just want to fish damnit.

I walked to the spot where I saw the nice size bass. I had the sinking line on and decided to go with a white wooly bugger. There were only two other fisherman a father and son. They were a ways down the bank from me. By their looks I could tell they were wondering what the hell a guy was doing fly fishing there. The section was right in front of a drainage ditch that flowed fresh rain water in to the pond. I saw some movement at the back end of the pool and something that looked like a huge fish but wasn't moving at all. The lighting was horrible and it was hard to tell what was a log and what was a fish.  I worked the water and ended up snagging a rock near where the water entered the pond.  I walked over to unsnag my fly and when I got back I noticed the log wasn't there anymore. IT WAS A FISH!  It had to be a monster bass. Was that the fish I hooked before? Was my chance at catching a big bass there over? I kept trying and eventually felt I spooked everything on that side of the pool. I went to the other side and started to work the water there. I saw splashes and what looked like bass busting shad. Still I had no action.

After about 30min the son started making his way towards me and I started fishing where I had started. I watched him for a bit and I don't know what he was fishing with but it made such a huge splash it startled me every now and then. After getting a horrible tangle in my line I decided to ditch the sinking line and use the 3wt reel with floating line. While changing my set up I asked the kid if he had caught anything. He said his dad had caught a huge bass earlier. He raised his hands and showed me the size of the fish it looked about the size of the one I had spooked earlier. Was that fish sitting there because it had just been caught? I decided to try a wannabe stealth bomber. It was chartreuse and had a strange material for a tail. Almost like artificial rabbit fur. My friend gave me this fly after some albrightflyfishing.com sale. I worked the fly but I noticed my leader was pretty short and the fly just didn't do the exact action I wanted. It wasn't working like a real stealth bomber. The lighting was really starting to fade and I still didn't feel like I fished this place right. I watched the kid some more and eventually saw him hook something close to shore that ripped his hook clean off. It was about 5ft away from him so I figured it was a bluegill.

I decided to get serious and fish right. I tied on a proper leader. Buffed it up using 10lb mono and went with a REAL stealth bomber. While I was set up I noticed the kid had left and I figured where he fished was too beat up to try now.  There's no way a big bass is still over there. I cast away from that spot first then on my second cast I decided to give that first spot another shot. I cast in what seemed to be 4ft from shore and maybe 5inches of water. I saw some movement near the fly then something sip it in. I set the hook hard hoping it was a bass but really thinking it was a bluegill. Then I saw the wake of the fish and it started to thrash around. This was no bluegill. The fish turned sideways and started to swim past me. This was by far the biggest bass I have ever hooked with a fly rod. All I could think of was the advice of my buddy Mike used to tell me. When you hook a big bass, set the hook then set it 2 more times. I set it about 10 times. I kept pressure on the fish and it wanted to run but there is no way I wanted to play with this thing on the 3wt "click paw" drag reel. I horsed the fish and the power of the 8wt held with the impression either I'm breaking or you're coming with me. The fish started to shake it's head and this is what I hate about big bass. You always seem to have them hooked to where you can see half of your fly sticking out of their mouth. Every time the fish jumps you just keep hoping your hook will stay in there. Luckily the multiple hook sets lodge the fly in well and the fish came to hand. 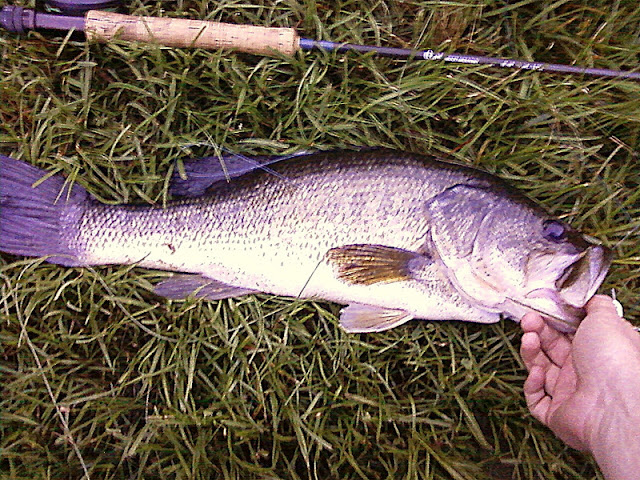 If you haven't tried the stealth bomber yet you really need to get your hands on these or tie them yourself. They are by far the best bass flies I've ever used. 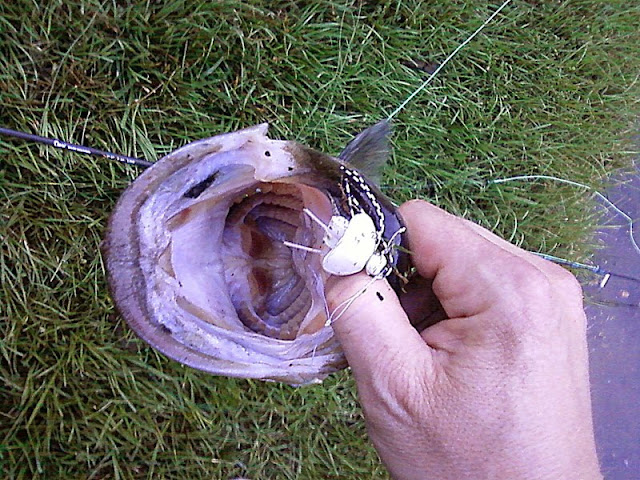 In just a couple weeks I've caught my biggest bass and probably gill on this fly. 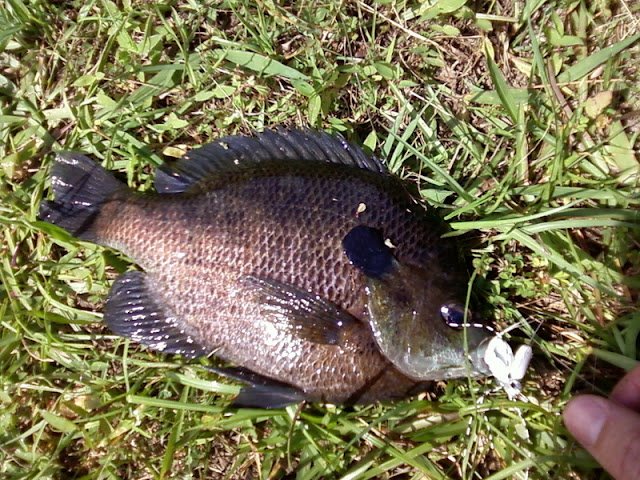 To top it off this is my 250th post which makes me wonder if all these events that seemed like mishaps were meant to happen. I don't know if I would have had the same night other wise.
Posted by Feather Chucker at 6:49 PM