Getting the Skunk Off

With the way the weather has been it seems more like early March than February. I remember seeing reports of people catching bowfin around late February so I decided to take a stab at it.  I've never really targeted them before but I have always wanted to catch one. I came equipped with wire leader and a plan of action for if I caught one.  Bowfin have vicious teeth. Lipping them is not an option. The locations I was informed that have bowfin in them wouldn't be your first choice if you were a nature lover.   The location I was found was perfect.  It had all the proper requirements for a nice bowfin spot. A stink you can't quite put your finger on.  Is it sewage or decaying animals? The water was dingy and had the visibility of maybe 6 inches.  There were interesting graffiti tags and drawings that really seemed to fit the place. It reminded me a little of places I fished as a kid.  They weren't pretty, usually borderline nasty. I can remember many times fishing off a pallet with nails sticking up everywhere or an old mattress. There were usually remnants of someone camping or random items like a pair of underwear, hyperdermic needles and if I was lucky an adult magazine.   The fishing in those places was sometimes quite good. Probably because most of the people inhabiting those places didn't have fishing on their mind.

So here I was in this glorified gutter hunting for a fish that hasn't changed much since prehistoric times. I put on a clouser and started working the water. On my first cast I hooked something under the water. It seemed like a snag but after a few good yanks on my rod it came free. This happened several times and I started to wonder how much debris was in this water.  I kept working the fly and with in the first five minutes I had a fish on. I let out a little wooohooooo! Then looked around to see if anyone heard me. I hadn't seen anyone and actually I really wouldn't have been that embarrassed if someone did hear me.  I was tickled that catching a fish after a two month slump can still make me feel like a kid. The murk of the water made it hard to tell what kind of fish it was. I was hoping for bowfin but the fish didn't seem slender enough.  I got the fish to the surface and saw the lateral line that identifies a largemouth. The fish fought surprisingly well. 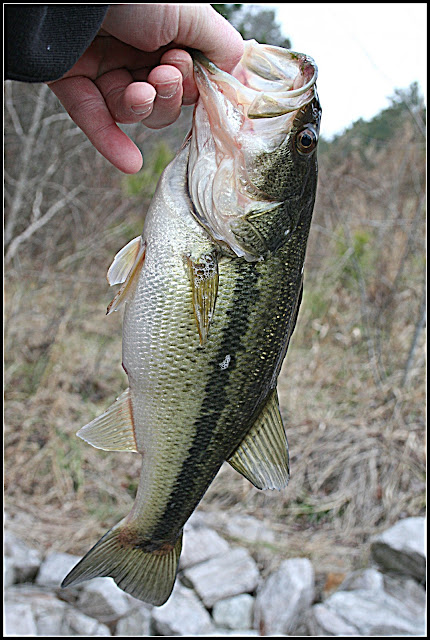 Despite the water quality this fished looked very healthy. When I turned it sideways you could see it was obviously feeding well. 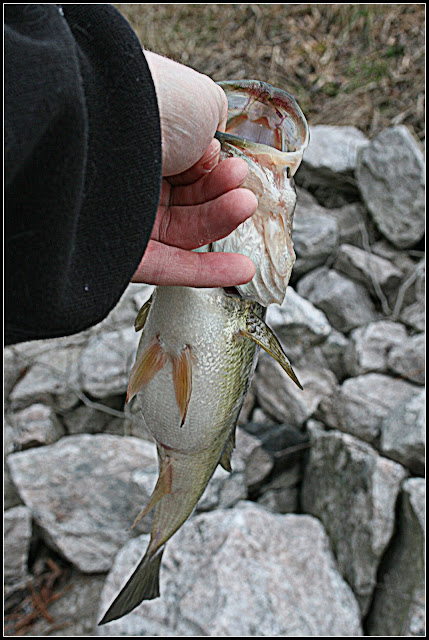 It was a great first fish of the year. The catch a fish early curse followed through. I only had one other tap on a stealth bomber the rest of the morning. It was still a great time and I'll be back to hunt for bowfin again.

Posted by Feather Chucker at 10:37 AM