Yeah I Take This Seriously 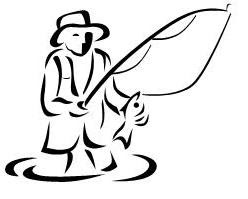 I arrived at the spot we agreed upon early as usual. There was no sign of Rick's car. I knew this was probably a bad idea. People always tell me they want to fish with me but I don't think they ever understand how serious I take it. Rick asked if he could fish with me and had that kind of cocky attitude of I know how to fish. He had no fly fishing experience but figured it had to be easy since he watched A River Runs Through it. Rick finally pulls up about 15min late. Since he saw the movie A River Runs Through It, I gave him my favorite line from that move. "Didn't you learn there's 3 things you're never late for? Church, Work and Fishing." Rick kind of snickered but never apologized for being late. He opens the back of his car and shows me the rod he bought just for this trip. I think he wanted me to oooh and aaah over his new Orvis Helios but I was still ticked at the lack of punctuality. "Where are your waders?" I asked. I don't need any I figured I'd just wade in my shorts and shoes. I said "You don't even have any boots?" No, I have high tops they should be fine. I explained "It's fall the water is about 50degrees. Really you need wading boots too." I figured the shop would have clued him in on this when he bought his rod. I'll be fine, I'm from the north. You know we should go to this other spot I know about.

Interesting that Rick has never fly fished has no wading gear and somehow with the purchase of a fly rod has become an expert on fishing locations. "We'll stay here if you don't mind, what flies do you have?" Rick wasn't sure what kind of fish we were going for so instead of asking what people use around here he bought a box full of salt water, bass and trout flies. Maybe 3 of the 50 were going to work for what we were fishing for. We were finally ready to make our trek towards the river. Rick holds up his beer and says "got to keep hydrated." I smile while inside dreading the decision I ever agreed to fish with this guy. My concerns were confirmed when partly down the trail I hear a ting tang of a aluminum can being thrown. "Did you just throw that can?" Rick had the look of surprise and seemed defensive about the question. "Yeah, someone will pick it up, probably the forest service. We got to pay them for something." he said. "Do me a favor and pick that up." I said. Rick looked at me and I could tell in his eyes he didn't want too. He could also see in my face that if he didn't pick the can up this trip would most likely be over. The hike to the creek was in silence. Only too be broken by Rick hocking loogies every five minutes. I spent my time just ranting in my head about what a moron this guy is while I waited for him to catch up. A few times I thought about just leaving him on the trail. "You hike fast." He said. We made it to a section and I explained where the best places to fish were. Then with in about 10 seconds I heard Rick exclaim "!##% this water is cold!" I usually would have said told ya or something along those lines but I just said "I bet it is in the high 40's." I pointed to a good spot where Rick should fish then made my way upstream. As I waded and tried to watch the water and finally take in some of the scenery I was deafened by the sound of sloshing and splashing behind me. I turned around to see Rick tap dancing in the river. Without wading boots every step he took looked like someone walking on ice. He stumbled a few times and barely kept himself from getting fully wet. In about 10min he was out of the water.I tried to forget about him. I just concentrated on the fishing. I was able to catch some fish too. I was actually having a good time until I heard really loud from behind "What fly you using!?" I told him come here and I'll show you. Rick stumbled in and I showed the hairs ear I was using. He had the same fly and I watched as he tied it on with 4 overhand knots. I can show you a better knot for that. After tying an improved clinch I sent him on his way. "You're all set" I told Rick and instead of walking back to where he was fishing he cast right into the section I was fishing in. I knew what to expect now so his behavior didn't bother me. I tried to explain how his drift needed to be and why. Partly through my explanation Rick said "yeah yeah, my feet are freezing I need to get out." He was ready to go and honestly so was I. We started walking back and instantly he got his rod tip stuck in a tree. He started to yank and bend at the rod. I told him he was going to break it if he wasn't careful. I grabbed the rod and freed it from the branches. I then explained if he pointed the rod behind him when he walked that stuff wouldn't happen as much. I got the expected answer "Whatever." The trail was pretty silent on the way back except for the cursing from Rick every time his rod was caught in a tree. Secretly I wanted to hear a snap. The rays of the sun started to shine through the trees and I'd stop to enjoy the views while waiting for Rick. I could tell he was getting close by the heavy breathing and spitting.

I noticed a few fish holding near the bank. I pointed them out and in the middle of my sentence about needing to be stealthy Rick shot down the bank. Snapping branches and dislodging rocks as he made his way down. The fish were gone after his first few steps. "Where'd they go?" You spooked them. Then Rick said the funniest thing, "dumb fish." This is where I couldn't hold my tongue anymore. I said "Well they are smart enough to where you can't catch them." I then went on to try to explain how he could have used cover to hide his shadow and he should have took his time getting down there. "Whatever, you take this too seriously." he said. That had me thinking on the hike back. Do I take fly fishing too seriously? Yes I do. Fishing is "my time." I try to make the most of it. It takes me away from my family who's time I take seriously too. If you don't understand that you're wasting "my time."

Posted by Feather Chucker at 4:49 AM

Email ThisBlogThis!Share to TwitterShare to FacebookShare to Pinterest
Labels: Morons