I fished yesterday at a new location for Carp. I was told this place had a huge population. I really need to check my sources. The last few times I've been told "fish are everywhere" or "there's a ton of this type of specific fish," it has never been the case. The lake wasn't that bad and too be honest I can see carp being there. We had a recent rain that may or may not have turned the water an off color. There was plenty of cover and debris on the bottom to make great holding areas for fish. All I saw were bluegill and the swirl of a carp in the distance. It was too far and in too deep of mud to wade too. Isn't that always how it is? A fish is in an area where the casting is almost impossible or just out of the reach of your longest cast. I was trying some new carp flies that I tied based on ones from this site Missouri Flies. There other fishermen from the Triangle Fly Fishers and none of us were tearing it up. A few gills here and there.

I was fishing from the bank casting towards a back eddy when my line started to move. I tried doing a strip set and I didn't feel anything on the end. I kept watching and my line was still moving at a consistent pace. I stripped again until I felt a hook up. There was resistance and I first thought I snagged a log. But why was the log moving? Then the log turned towards me and came my direction. In the past I would have thought this could be a huge catfish or carp. But after catching those fish with in 5min I knew what I had without seeing it. I even called over to my friends. "I got a turtle." Sure enough, once the animal came closer you could see the shell. When ever I hook a turtle my first thought is I hope it's not a snapper. But even a decent size box turtle can give a good chomp. The turtle came closer and I realized the turtle was hooked in the foot. When pulling on the leader the fly came free and the turtle was released with no harm done.

The rest of the morning I walked the banks and did more exploring than fishing. The neatest thing I saw was a frog hatch. I should have taken a picture. I found this one from another site.

While walking the banks I noticed movement by my feet. I thought maybe they were leaf or grass hoppers. I stopped, squatted down and saw the tiniest frogs. I guess they are called Eastern American Toads. They were no bigger than a fingernail and rust colored. 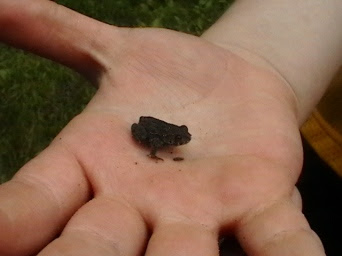 The frogs were every where and scattered when you walked. I tried a fly that looked similar but nothing even sniffed it. I didn't see much other wild life except a faun that was feeding. Obviously used to people because she let me get with in about 30ft of her. The deer around here are a little out of control. I've heard it has gotten so bad they opened up bow hunting to with in city limits. The main issue I have with deer is the ticks that follow them. I can check this lake off my list. I doubt I'll come back there are better places to fish with in the same distance it takes to get here.
Posted by Feather Chucker at 5:33 AM