Most kids learn how to fish from their father's. My father wasn't around very much so my mother had to play both roles. She taught me how to fish for trout in the high sierra's and I can still remember the first time I actually hooked a fish. A boy ran through the camp yelling "the trucks here!" A large rumble from a diesel truck came closer and a stock truck pulled in and parked right in front of the campsite. A man gets out climbs up a ladder and dips a net into the tank at the back of the truck. He lifts the net and almost can't handle the weight of all the flopping fish inside. Almost as quickly as he climbed the ladder he works his way over to the creek and heaves the fish into the water. Was this man actually dumping all these trout near my campsite? I couldn't really understand what was going on. Everyone watched intently as the man dumped 3 nets of fish into the water. As quickly as he came the man jumped in his truck and moved down too a new section of the campground. People ran for their fishing poles and my mother yelled at me to get mine. We hurried over to the pool where the fish had been dumped. The fish were in a swarm and in shock from going from a cool tank into a stream with current. People outlined the bank and many were armed with Velveeta cheese. I had Patzke's Balls of Fire. 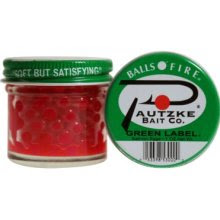 They were a version of salmon eggs. It was a staple bait of my family for years. I threw the eggs into the water and tried to will the fish to strike. My mother just kept telling me to leave it there. The fish were just sitting there not moving. I saw other peoples cheese balls drifting around the fish. A fish finally inhaled one of the balls and for the first time I saw what a hooked trout looked like in the water. It wasn't much longer when a fish charged my salmon eggs and head butted them knocking two of the eggs off the treble hook. I kept staring not being sure what to do. The fish ate one then two of the free floating eggs then went for the last one on my treble hook. My mom yelled. "HOOK HIM, HOOK HIM!" I lifted the rod and felt the electricity of having something alive on the other end. I freaked out and handed the pole to my mother. There was a few seconds of us passing the rod back and forth and her yelling "NO you reel it in!" The whole experience was too much for me, I couldn't comprehend what was really going on. She reeled in the fish and said "You caught your first fish!" I started crying and said with a sobbing voice "no you caught it, you reeled it in." Everyone at the pool as well as my mom told me they were sure I'd have another chance. I did have some fish hit but I couldn't hook another one. I felt like my only chance was lost. It was only about a day or so until I did indeed hook a fish on my own. I brought it back to my mother very proud of myself. She was happy too but started to get annoyed when I kept bringing fish after fish to her. "Why are you doing this?" She asked. I didn't know how to unhook them. So every-time I'd catch a fish I'd run back from some random part of the campground to have her unhook it. She showed me how to unhook the fish and tie on a new hook. She also bought me a creel to store the caught fish in. I owe my start as a fisherman to her.

Imagine how happy I was when my mother moved out to NC to be closer to the grand-kids and said she'd like to learn fly fishing. I was skeptical of how much interest she really did have. I told her about wading and how much different it was than spin fishing but she still wanted to learn. Yesterday was our first adventure on the water. I was apprehensive but excited for what the day had in store. Would she be able to wade? Would she catch anything? Would she hate it? In a few moments we were going to find out.
Teaching someone is always a little awkward. Trying to explain the feel of the cast and it is hard to show someone with out pulling line out. This gives the false impression that you need to pull line out to cast properly. My mother tried this at first and got the worst tangle in her leader. She also complained about not being able to see her fly and leader. I had forgotten about the 6x tippet that was on the line from when I fished for wild brookies. I explained that line is hard to see and it does take time for your eyes to adjust. I was using a 5wt with a heavier leader and I thought about switching with her but I was dealing with a bad fly line tangle myself. My mother kept casting and eventually wrapped the leader around the rod and made it knot itself. She worked at it but couldn't get the knot out. I finally got the tangle undone on my reel and made my way over. I assessed the situation and realized that her leader was pretty much done for. I gave her my rod and just hung out with her explaining that right now as a beginner accuracy is far more important than distance. I pulled out a certain amount of line and told her once you can cast this where ever you want then we'll pull another few feet out. If you can cast that accurately then we'll pull out more and so on. This worked out great and as I was showing her the accuracy of a short distance cast I had a few strikes from sunfish confirming my teaching. She listened very well and I realized women are far better students mostly because of their tolerance and patience.

It didn't take long until she was able to cast 30ft and hook up with her first fish. There was a pool with fish hitting at the back end. I knew if she got her cast with in a 2ft window she'd be sure to catch a fish. Her casts would land close but they'd miss the window by about 8inches. Eventually she got a cast close and as I told her to just let the popper sit and we held our breath, PLOOOP! The fly went under. She set the hook instantly which was pretty impressive. Her first instinct was to go to the reel but I kept saying "STRIP, STRIP" and went to grab the line. She pulled the rod away from me so she could do it herself and started to strip the line in. We were both ecstatic, my mother had caught her first fish with a fly rod.
While I was unhooking the fish she said "hurry up I want to catch another one." Which didn't even bother me and I was tickled at her enthusiasm. It didn't take long and she had another fish in hand. The day went on with her casting well and hooking fish. She learned faster than anyone I have ever taught.
I never had to worry about her wading. She took her time and moved through the water with no problems. Then I was reminded of those days when I used to run back to her every time I caught a fish. My mother had just caught her 8-9th fish and held the fish suspended over to me. I finally said, "you need to learn to unhook these yourself." I showed her a few times and after that I didn't have to worry about her for the rest of the day.
I was amazed at how she was finding pools on her own, made accurate casts and caught fish with ease.
It was fun to just sit back and watch her enjoy herself. After her first couple fish she told me "I can see why this is addicting." Standing in the water gave her a new point of view that you can only get while fishing.
The beauty of the water and the soul of fly fishing had claimed another victim. I was really impressed with how she did. Not just because she was my mother but how she dealt with everything. It was definitely one of my best days on the water. I'm really happy I could share something I love so much with the person who started my passion for fishing.

Posted by Feather Chucker at 11:47 AM