A Couple of Firsts 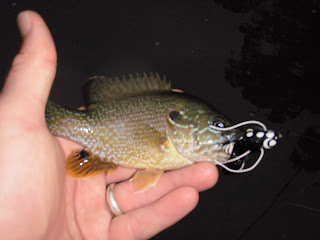 The great thing about the Triangle Fly Fishers club is there are plenty of people to fish with. Recently I was contacted about fishing the Eno with a member who hadn't done well there. We talked the night before and I informed him that he is definitely going to catch sunfish. It's almost impossible not too. I could tell there was some doubt in his voice. It's amazing how much the river has changed in just a couple months. The brush is so high and thick the river and trails are hidden. It just started to rain literally as I was parking the car. We gathered are gear and scrambled down a steep bank into the river. It's not hard to find fish on the Eno. Cast towards any structure along the bank and you're sure to get some action. 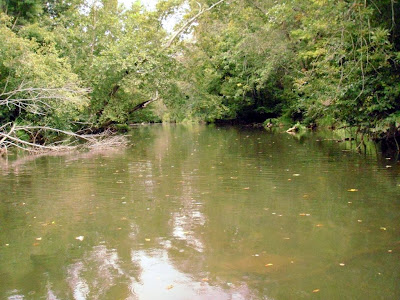 That was pretty much my only advice. It took longer than I thought but with in five min Greg had his first Eno sunfish on. 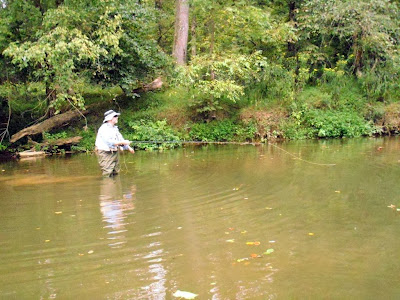 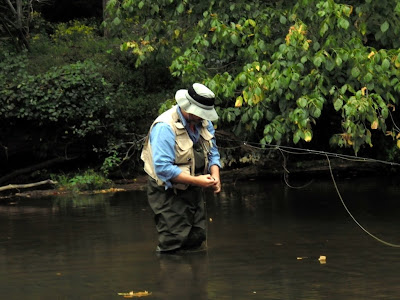 The both of us continued to catch panfish while there was a light rain. When the rain stopped the fish became less aggressive. I noticed most of my casts had to be right against cover. If the fly didn't land with in 6inches of structure usually I didn't get a hit. Submerged roots and trees are common along the banks. These locations are full of fish. It was in one of these places where I caught a fish that looked a little strange to me. I've been trying to catch a Roanoke ever since I started fishing the Eno. The coloring of this fish didn't match a Roanokes but the body was stockier and a little different then the average bluegill and sunfish. I think this fish is a warmouth which would be the first one I've ever caught on the Eno. In one section I caught 3 of them. I didn't catch another one the rest of the day.

It was a normal Eno trip. 7-10 sunfish and always some surprise. That's what makes the Eno really fun. You never know what you're gonna get.
Posted by Feather Chucker at 5:25 AM