After the Triangle Fly Fishers Haw River Cleanup I decided to do a little fishing. Not really expecting much I tossed my black bead head wooly bugger under a tree. Gave it a few strips and felt some tension. The fish didn't tug hard at first but then it was like it woke up and started to peel off line. 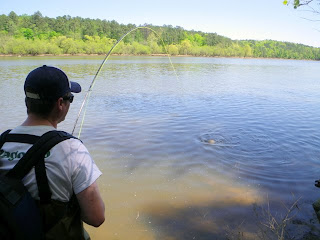 The water was brown and the visibility was horrible. All I could see was my line pointing at the water and zigzagging as the fish headed to deeper water. I knew it was either a carp or a catfish. I let the fish run then remembered how I"ve lost plenty of fish before by letting them run too far. They eventually get caught on a tree or some log and you have to snap the line. After about 100ft of running I grabbed the line and tested the Orvis 8wt. It held fine and the the fish did some interesting things. Went straight towards the bank so fast I thought it was gonna fly out of the water and land on shore. Stopped like a dime about 6inches away then headed for deep water again. It kept doing this over and over and each time it inched closer. The fish rolled about a foot away and I could see from the mustard shimmer that it was a carp. 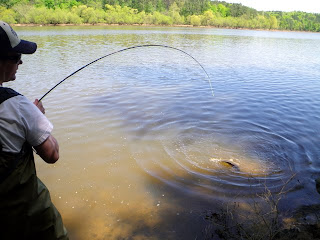 I finally horsed it towards me and like all of my other carp landing attempts the fish made a last ditch effort run right as my hand was grabbing for it. Usually this is about the same time my tippet or knot snaps. 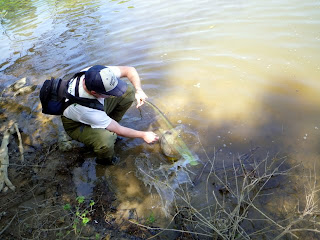 Luckily it held and the fish came to hand. 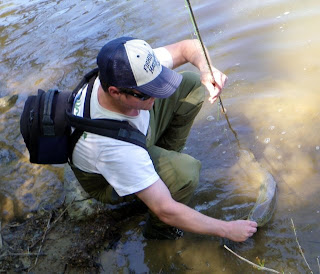 Sorry no glory photos, I just removed the bugger and the fish had enough in him to splash me and swim off on his own. I have to thank my buddy for taking the pics while the whole thing was going on. Usually when I'm fishing I never have any pictures of "me" actually fishing. =)
Posted by Feather Chucker at 11:16 AM