Kristin and I went to My father-in-laws house in VA for the 4th of July. I hate driving there. It's almost a 4hr drive from Raleigh. The place is called Pearisburg and it is beautiful. The New River runs near it as well as a branch of the new river called Walkers Creek. The weather forecast called for thunderstorms and they chased us off the water a few times. Even with the rain this was one of the best weekends I have had in awhile. My brother and sister-in-law came up as well with their kids. My nephew is four now and just getting to where he can cast and fish on his own. It wasn't long before his dad broke out the Zebco rod and we had a casting session on the front lawn. My father-in-law had a friend that had some land along Walkers Creek and we decided to go down there to try our luck. The section was beautiful with water that looked untouched. It's the kind of creek you dream about when thinking of a perfect place to take a kid for his first time fishing. 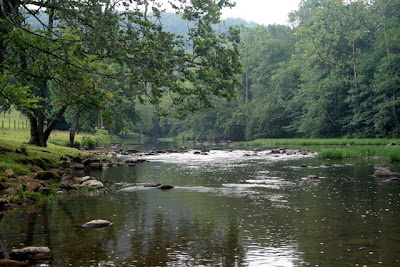 We scoped out the water for movement, there wasn't much surface activity but you could see fish moving underwater. It wasn't long before I caught a sunfish on a popper. Carter and his grandfather hit a spot under a tree. 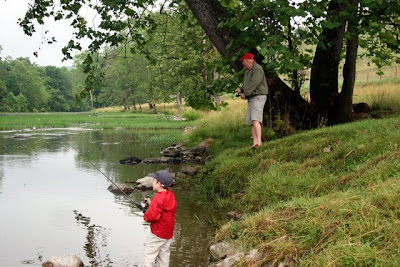 Carter could cast pretty well and I think he knew the concept of fishing, but I wasn't sure he was going to be able to actually catch a fish by himself. It didn't take him long to prove me wrong. First off, this kid can cast. He can do a 20ft cast no problem, with decent accuracy. So he swings back and lets the rubber crayfish fly. 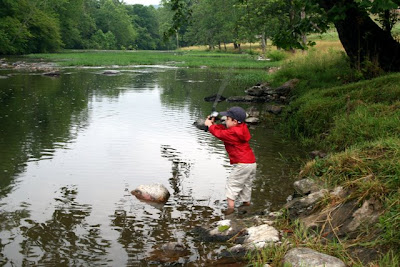 It was a great cast and immediately he had a few hits. He wasn't able to snag a fish on that cast. On his second cast he threw cross the pool of fish, slowly worked the crayfish over them and FISH ON!!! He yelled at us "I GOT ONE!" The fight ensued..... 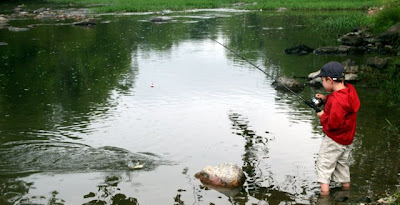 To every ones surprise he brought the fish in quickly. It was a nice little rock bass. 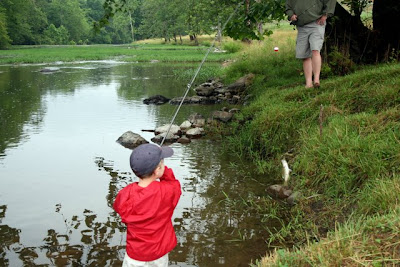 After showing his grandpa this fish I showed him how to lip the fish and he was able to pose with his trophy. 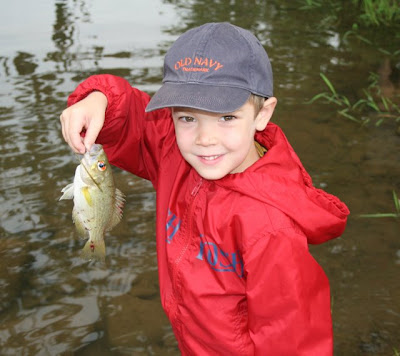 He was able to catch a couple more after that. Tom decided to throw a line in and show us all how it is done. 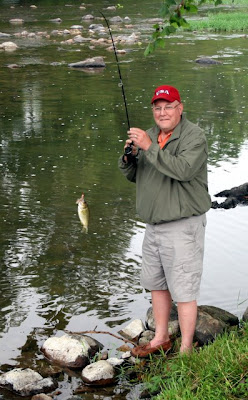 After the killing Tom and Carter were making on their fishing hole I had to step in to catch a few, and was nicknamed "fish thief". The water was really beautiful and clear with different colored rocks littering the bottom. 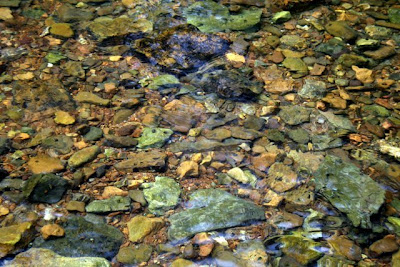 There was postcard views where ever you looked. Russel was able to find a nice little spot where he could fish with his son and enjoy the views. 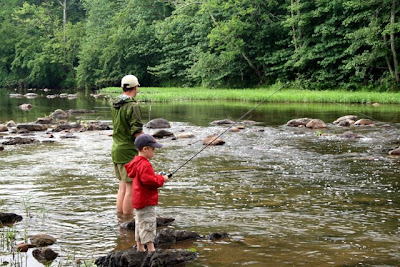 We couldn't have asked for a better day. The weather cooperated enough to rain just lightly to cool us off without getting us really wet. The fish gods smiled on us, no one was skunked and everyone had a great time. These are the days that make you happy to be a fisherman. The view walking up stream was spectacular and made me really appreciate the moment. 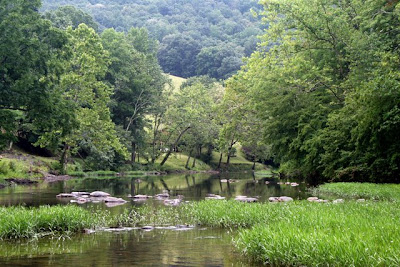 The next day we decided to take a paddle down the new river. You won't see many pictures from this trip because I didn't take my camera. This was my smartest move to date this year because this river had some tricks up its sleeve for us. At the take out the anticipation of going down the river was overwhelming, it had been raining off and on the last few days. Finally it seemed like we were getting a break. The water seemed to be at a decent level and was very clear. Russel has some experience canoeing so I figured we were in good hands. I offered to have Carter ride with us in the tandem kayak but Amy and Russ felt that might not be the best idea. That was very good judgement. 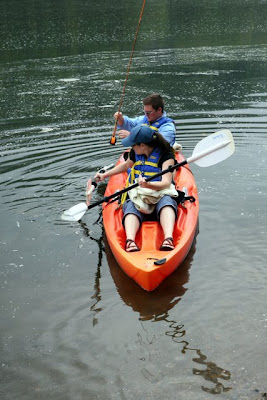 The excitement continued to build as we got our ready, little did I know that this would be the last time I'd use this fly rod. Everyone headed to the middle of the river and we were on our way. 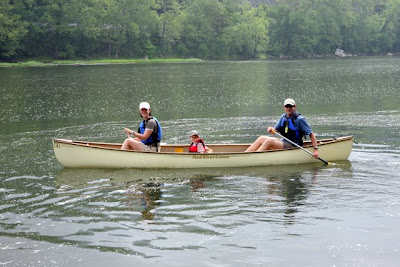 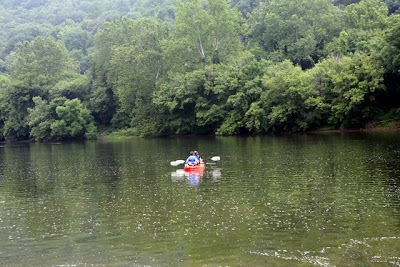 While we were in the calm water we decided to try some fishing, I'll admit, fishing in a kayak SUCKS! Especially in a tandem. If you're going to fish in a tandem make sure the person who's in the front of the kayak likes to fish as well. If they don't they will not care which way the boat is facing how you're drifting, or even bother to tell you, "you might want to reel your line in, we're coming to some rapids." This was a re-occurring theme. My wife hates when I fish, she always complains about me saying just give me five min. According to her I live in some parallel universe where 5min is actually 20min or it's a measured amount of time that exists until I feel like stopping. It wasn't long before we heard the whistle blow of a train and heard the sound of something huge thundering up behind us. A train came by and was pretty close. I have always had a fondness for trains and paddling next to one is really fun. You can feel the vibration of the train even though you're in the water. I can't explain it but it's a eerie and neat feeling. At that time I wished I had a video camera, it was a unique experience to see the river carving between huge cliffs with green trees lining the banks and a train going by.

I've always heard tandems called divorce boats which I thought was a funny label but if you really want to test a relationship, get into a stressful situation in one.

The first rapid should have been an indication of how the day was going to pan out. It didn't look like all that much, a decent amount of water running threw it, no huge drop offs, logs or rocks sticking up. Russ and Amy cruised threw it no problem, my optimism was crushed when our kayak got stuck in between two rocks right as we were breaching a rapid. The water was shallow enough for us to get out and move the kayak. Kristin was kind of scared but not too bad. The next rapid I asked her where rocks are and she couldn't tell me. I have to give you an idea of a tandem kayak. If you're in the back and a person is sitting in the front, you can't see ANYTHING. So you have to depend on the person in front to give you some sort of directions, like big rock here turn left or nice water to the right head that way. Nothing is worse than saying "what looks good?" And getting the response "I don't know....." Also it doesn't give you a warm fuzzy feeling when you near a rapid and you hear the water getting louder you can see it turning white and turbulent, but you don't know what's right ahead of you, you ask "do you see any big rocks?" The response is uhhh uhhh uhhhh, YEAH!!! Then within 2 seconds WHAM!! Your boat slams against a rock and jars the kayak sending it either in another direction or almost ejecting you or the person sitting in front of you into the river. My wife is pregnant and the last thing I wanted to see was her getting thrown into the river. The section where we were paddling was probably Class II, that is low for rivers. Even with that, there is a element of danger, there are big rocks under the water and you would not want to run into them at any speed.

Needless to say the lack of direction and the jarring of rocks and breaching was getting to me. The trip started to change from a pleasant jaunt down the river into a argument over what's in front of us and do we go left and right. This resulted in yelling and the gnashing of teeth. We had the fun time of breaching a couple more times and even going down a rapid backwards, that was great. Nothing like going down a rapid backwards without seeing where you're going in a river you've never been on before. Kristin and I were both getting drained from the stress of not knowing what's coming next. What topped it off was on the biggest rapid I lost my fly rod. We breached on a rock, I got out to get us off and when I got back in the kayak I nudged the rod into the water. I reached back to get it but it was too far away, I looked forward and saw another set of rapids coming quickly, I decided our safety was more important that the fly rod. We came to a calm section just short of the rapids and I looked hoping to see the rod some how float by. It never came.

Russ would be a crappy psychic because every time he said the take out was around this next bend, we would see nothing but river and more trees. After about the second time of the predictions I stopped listening to him or asking. I was in the worst of moods, Kristin and I had argued so much we weren't really talking, I had already made the claim we were selling this damn kayak when we get home. It was getting hot and there were things floating in the water that smelled and looked exactly like horse poop. We didn't want to disappoint ourselves so when we rounded a bend we just expected to see another rapid, and usually weren't disappointed. Everyone was starting to show signs, that they wanted this to end. The only person who was still in somewhat of a cheery mood was Carter. He really didn't get to fish much at all the whole trip. I think because of the crampness of the canoe and he is still a little crazy with the casting. I started to bring up the fact that I lost my fishing pole. Russ of course being the nice guy he is, wanted to go back and get it, but the thought of going down rapids again or paddling anymore for that matter were enough to make me turn that down. Then Carter said "It's OK Kevin, I'll share my pole with you." How could I be mad after that? It kind of turned my whole attitude around, here all this kid wanted to do was fish and yet he was willing to give his fishing pole to me to use. I thought that was really generous of a 4yr old. We finally did turn a corner and were able to see the take out. We were all happy and it still seemed like it took half a day to get to it. The trip over all was great. I would do it again even with the rapid episodes. As you probably guessed we decided to keep the kayak and I apologized to Kristin for my behavior on the rapids. When we got back to Tom's place we looked at a map and wanted to see how far we went. I was sure we had paddled close to the NC state line. To my surprise we had only gone 6miles!

Posted by Feather Chucker at 1:09 PM