It Can Be Done

Well I can't say I haven't tried. I have been fishing for shad on the Neuse the last 3yrs. I have caught Hickory Shad on the Roanoke River in Weldon, NC but never anything on the Neuse. What I have really been looking for is an American Shad. The Americans are larger than Hickory Shad growing over 5lbs. This year was the first time I really focused on it. I'm at a disadvantage because I don't have a boat. These shad can be caught from land if you know where to look. I contacted our state biologist who studies androminous fish. He gave me info on where fish were being shocked. My first three attempts were shadless. It was really strange I'd catch one fish like a crappie or bass then nothing else. I gave it a break for a couple weeks. Then the reports started rolling in from my friends that spinfish.

"The shad are here!" They exclaimed.

Shad are amazing creatures to me. I doubt when many people catch them they appreciate the journey these fish make. I got to the river and geared up. I went with an intermediate line and two flies I tied. The flies were really for crappie but I figured they should work for shad to. I spent the first 20 minutes casting and just trying to enjoy the river. Splashes from fish were here and there. Most likely gizzard shad. Then I felt a tap.... tap... tap.... BAM! A fish was definitely on and it was a good one. I put pressure on the fish and it seemed like it did a 180 and swam right towards me. The rod went limp and there was no tension on the line. Was it a shad? I hadn't caught one from land before so I had nothing to reference. It was a good fish whatever it was. I had wondered if that was going to be my only chance. I played around with different retrieves. Slow strips, 2-3inch quick strips, fast short strips.. FISH ON!

I was using an 8wt rod mainly because I wanted the backbone in case I ran into a bowfin or carp.  It was a good thing I had it. This fish turned in the current and used it to perfection. I kept massive pressure on the fish and I just wanted to see what it was. C'mon, c'mon, the fish would get near the surface then dive down again. Then after what seemed like an eternity I got a glimpse. It was a shad! A big one! The next thing that rushed through my mind were all the comments about how easy it is to rip the hook out of a shads mouth. I got the fish close pleading, "please stay on, please stay on." The fish was done or so I thought. I had it next to me and while I fumbled with my camera it started to flop back towards the water. NOOOOOO! I did my best and most gentle combination of almost body slamming the fish and securing it. I got it into position and seriously every time I went to push the shutter it started to flop around. I finally just took one like this 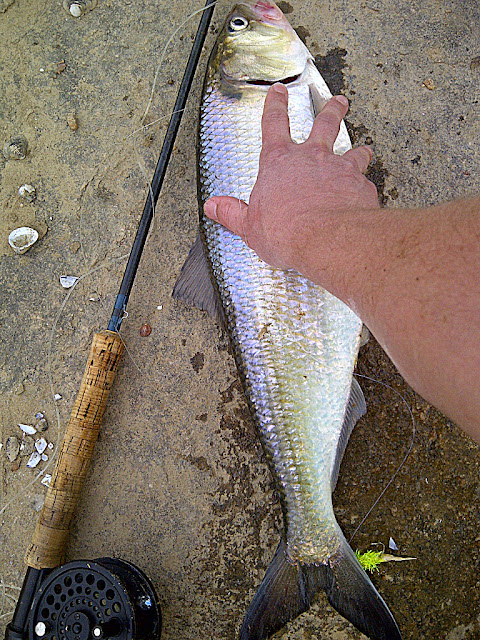 Not the best picture. At least I got one though. It was surreal. Did I really do it? Was this really a shad? A fish that spends the majority of its life in the ocean was right here under my hand 150miles from saltwater. Pretty Cool! To top it off it was caught with a fly I tied and the fish qualifies for a North Carlina Citation. All I can think about is catching another one now. I think I have what some people call a shaddiction. 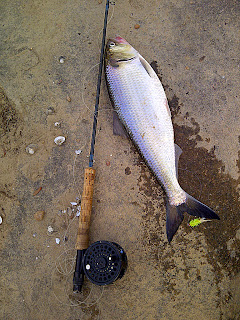 Posted by Feather Chucker at 4:08 AM