Not Your Average Joe

When it comes to fishing I guess I'm a little conceited. I'd like to think I know what I'm doing most of the time. I guess that's why I've never hired a guide. About a month ago I fished with a friend who guides on a delayed harvest stream. We both came up to a stretch where fish were rising consistently. Lance and I were both catching fish and I thought I was hot stuff for a little while. That was until Lance started doing something I don't know if I've ever seen another fisherman do before. Now I could write this like Lance was showing off and being an arrogant jerk. He couldn't be farther from that type of person. He spent a good hour of his fishing time helping a new fisherman catch his first trout on the fly. Lance didn't have to do this and you could tell his assistance was genuine. It wasn't like he kept throwing in plugs for his guide service while he was helping.

So here we are on the water both catching fish consistently when all of a sudden Lance starts calling his fish. There was a fish right in between us and he said it had followed his fly on his last two casts.  "Watch I'm going to get this one on the dry this time" he said. hehe sure whatever. I mean we all say stuff like that while fishing. Then I look over and actually see the fish take the dry. This fish couldn't have been more in the middle of Lance and I. It was probably 10ft away from each of us. I thought hmm that was really lucky. Then a few casts later Lance says "See that brookie over there? I've been watching it, I'm going to catch it on the dropper." Literally his next cast he hooks the fish on the dropper and brings it in. Wow, lucky twice. Well then he did this similar thing 3 more times. It's one thing to make a comment or bring it up but to say I'm going to catch a fish this way then do it on the next cast is pretty damn amazing. Lance did this repeatedly at least 5 times. 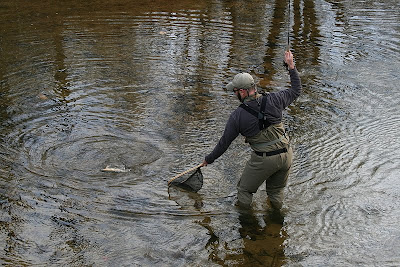 I wasn't going to dare try calling my fish. I knew what would happen if I did that. I thought about doing it a lot. I didn't have the courage. I was more amazed at what I was witnessing. It made me realize the separation between guides and regular fisherman. I mean Lance knew his bugs and fish behavior down to the point where he could predict it. I'd love to get to that level. In the end Lance was as humble as always. Telling people he caught a few when they asked. When in truth if he did try he probably would have lost count. He offered to let me use the fly he was having luck with but I was having some success and felt I had caught enough fish already. I've never really been one of those how many fish did you catch guys? I do have to admit I get big fish envy. I really don't mind someone catching 100 fish if I catch one that could eat most of theirs.

Lance has a great blog and guides in NC.  He is a pleasure to fish and have a beer with.
Posted by Feather Chucker at 5:33 AM