I joined a fly swap started by Trevor the writer for the blog Fly Carpin. At first I was stoked at the chance too get hooked up with some awesome carp flies. Then as the list of who was participating grew the reality started to set in.   I was hit with the fact that I myself had to tie flies too. The list of who would get them is a little intimidating. Some of these guys are professional fly tiers and I'd hate for them to think I sent them trash. My first idea for a pattern that was fairly easy to tie evolved into something a lot more difficult. I tried to think of a fly I'd like to have. In the end I came up with this. 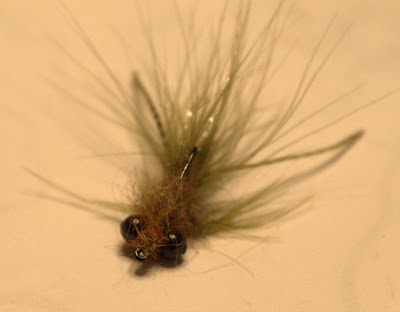 Hook: Gamakatsu Sz8 SL45
Lead Free Wire
Large Black Bead Chain
Stu Thompson Craw Colored Dubbing
Dark Olive Marabou
Olive Silly Legs
Flashabou
The thing I mainly like about this fly is the coloring. It's a cross between a dragon fly nymph and a crawfish. I'm not really one for naming flies but if I was going to I'd go with Damcraw. The dubbing I used for this fly is something I got from Stu Thompson. Stu is a guide that mainly fishes big waters in Canada. He has a DVD and various pictures of him with monster catfish and carp. He has a cult following on the site Warmfly.com. The crawfish color dubbing he sent me is the best I have ever seen. I have never had great luck with crawfish patterns. I decided to try tying some using the dubbing and pheasant feathers. I noticed the bottom feathers on a pheasant tail work as mock pincers. Tell me what you think. 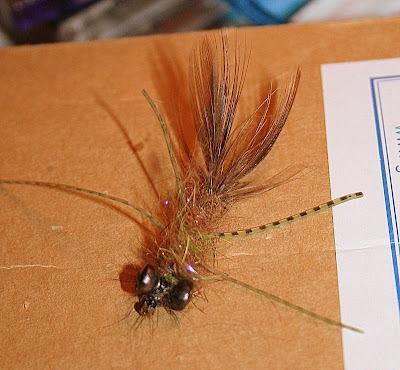 Posted by Feather Chucker at 4:55 PM