This morning I checked out a location that was given by a friend.   The water was like most around this area.  There are many small bodies of water that are on the fence between lakes and ponds.  They usually have the same species of fish.  A higher end neighborhood was near the lake and I expected to see a no fishing or a residents only sign.   Luckily there was no sign and I could see small brim fleeing from the banks as I walked closer.  The sun was just coming up and the reflection of the trees were broken by carp fins.   I made my way around looking for panfish and bass beds.  There was a place where a creek fed in and a grass carp was mudding.  I had a popper on and decided to give it a try.  There's no way to properly explain the excitement of a big fish going towards a popper.  The time between the fish started moving towards the fly and it actually eating it I was in disbelief.  I only believed the fish actually ate the popper when I stripped to set the hook and saw an explosion of water and fins.  Grass carp fight very strange.   I have only caught two but both behaved the exact same way.   They would fight for a few seconds then let you bring them close to shore.  Once you had them close enough to almost touch they turn around and sprint for deeper water.   These sprints show their power and they happen over and over.  After about 7 rounds of this scenario I was able to land the fish.  I couldn't get that great of a picture because of the lighting and my crappy camera. 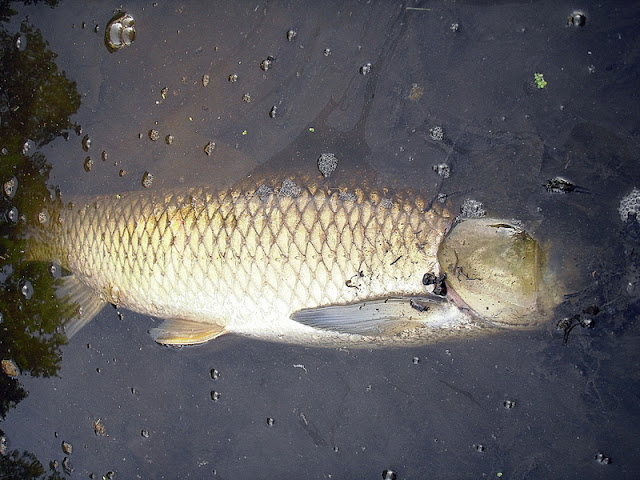 When the fish took off it doused my legs with water soaking my feet. Last May was the last time I caught a grass carp and strangely enough it was also on a popper.

Later I headed to a familiar pond that usually has monster gills. The action was slow in the beginning. I ended up trying something I'm not fond of but works. Panfish often succumb to peer pressure. If they see other fish chasing something they follow along. I dropped my popper size down to get the smaller to medium size fishes attention. Then sure enough the bigger fish started to investigate. The monsters seemed to be located in a small 6foot radius. They hit hard and almost swallowed the fly ever single time. I'm not sure why these gills get so big and I don't really care as long as I can catch them. 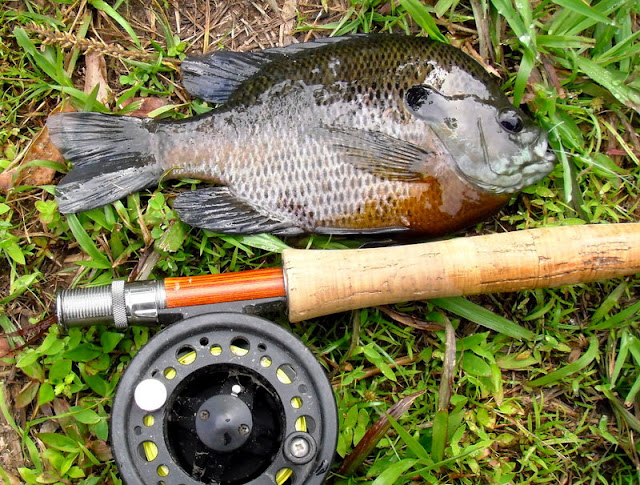 Even with a 5wt these fish can put a nice bend in the rod. In between catches I had a grass carp rise for the popper and refuse the fly. I'm starting to wonder which carp are more aggressive, commons or grassies. May is usually my favorite month to fish. This type of start is only making me believe that more. 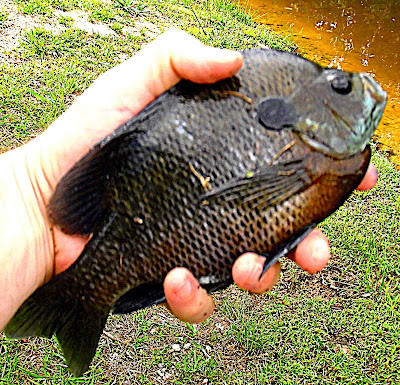 Posted by Feather Chucker at 9:19 AM