Today I sat down and tied some flies that I'm going to use for white bass fishing this year. The bulk of them is clousers. I've been trying to use material that I already have so I worked with some chartreuse material that could substitute for buck tail. Here is a up close pic of a small clouser I tied.  I was messing around and tried tying a size 14 clouser. It was a lot more difficult than I first thought.

It's been a while since I've tied some flies. It didn't take long for me to get back into the swing of things. Stabbing my fingers multiple times and getting glue on my hands. I think I've tied enough clousers for this year and I played around with some patterns that worked last year. 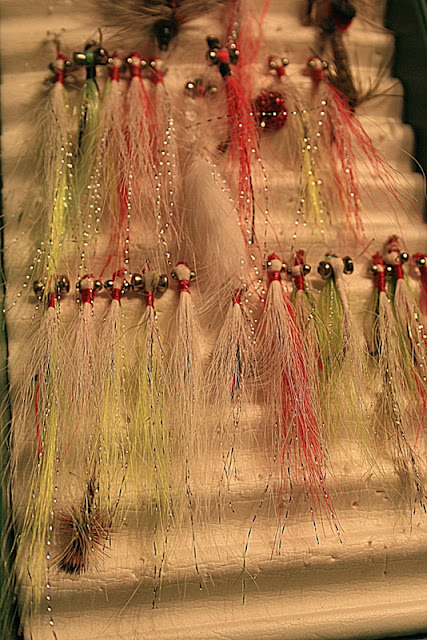 I know these are ugly but they will work. Speaking of ugly flies I attempted tying one that worked for catfish last year and I think is a good carp fly. I have endearingly called it navel lint. 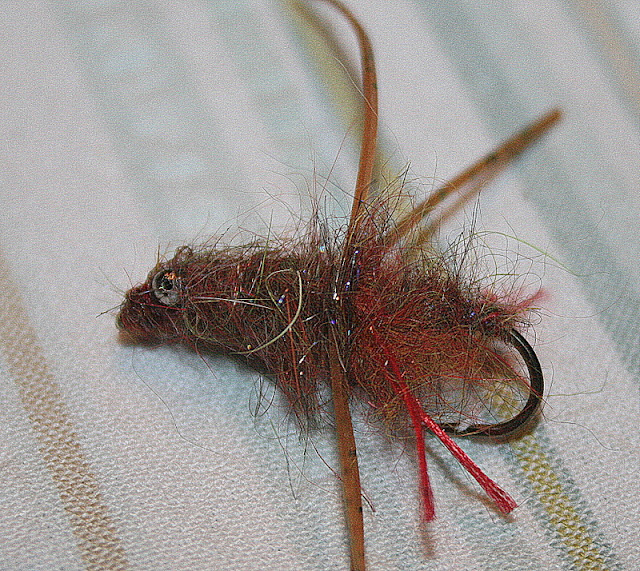 I love the coloring on the fly and the rubber legs hopefully give that extra attractiveness that makes fish strike. The fly is somewhat easy to tie but I need to figure out an easy way to tie the rubber legs in.  They were a pain in the A$$!  I tied them in first then while I was wrapping the dubbing which by the way was time consuming. I put the dubbing in a thread loop and twisted it until it made a yarn like consistency. Then I started wrapping the fly and tried to slowly go around the rubber legs. It took a lot of concentration to go around the legs and not get them wrapped up in the thread. So I had to find a balance of holding the legs with one hand and wrapping with the other. It wasn't fun. Watch these be the best flies that I've tied and I'll be up at night in tears tying 100 of these because they work. The blend of dubbing is a custom blend made by Stu Thompson. He's a popular carp fisherman in Canada. He can usually be found hanging out at in the forums at warmfly.com.

I was able to get out and fish. I tried a local pond that is usually good no matter when you fish it. A cold front was coming in and a constant cool breeze kept me from getting comfortable. The fish weren't in their usual spots. I walked around the pond and as I got near the back end I realized the wind was pushing the water in that direction. I figured maybe bass were waiting in a back eddy for food to be blown in the current too them. As luck would have it I was right and got a nice tug. 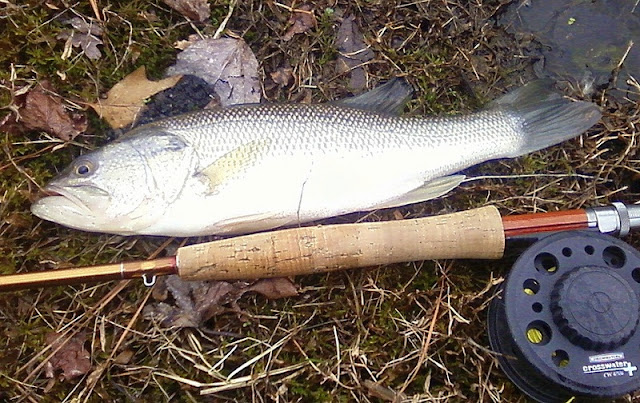 It always amazing me how differently colored largemouth bass can be. This one has basically no lateral line to speak of. It was so silver it almost looked white. I caught it on a black wooly bugger.  I forgot how bass hit in cold weather. It feels like your fly bumped a rock or stick on the retrieve. If you give any slack the fish is gone. If you keep stripping like you want to snag your fly you'll hook them.  I can never seem to remember to set the hook a few times too. When I got this fish on shore he flopped a few times and the fly came right out. I hooked a few more fish in the back eddy and the wind chased me off the pond. I really didn't expect to catch much. I would have expected to catch bluegill if I caught anything. It's strange to be catching bass before sunfish. I think this year is going to be different than any other year I've fished.

Posted by Feather Chucker at 4:55 PM