Last year I didn't try poppers that often because I thought they only worked in the summer. When the weather is warmer and the fish are on the move. Today I was hunting for bowfin and saw a bunch of bluegill. I didn't want to catch the little ones so I decided to fish one of the poppers I tied for smallmouth. After a few little piddly strikes I had a nice GULP! My fly disappeared and the rod bent over way to far to be a sunfish. 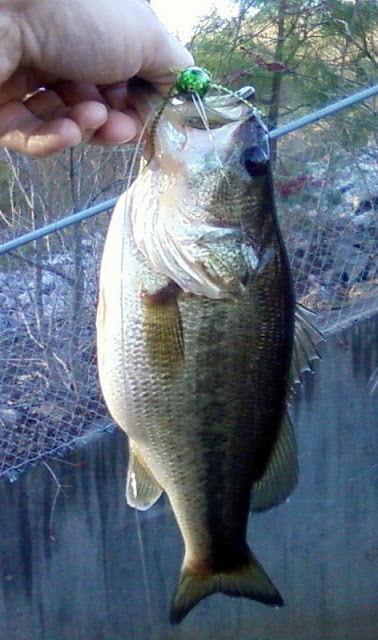 This fish was fat and happy.  It was the most unproportioned fish I think I have ever caught.  It was almost as fat and tall as it was long.  I've heard of people calling fish footballs before but this bass really did look like a football.  The fish couldn't have been more than 13 inches but it looked like it swallowed two softballs.   I tried various poppers but the bass seemed to really be keen on this particular one.  I tied it based on a Sneaky Pete pattern.  I wanted it to lay like a frog does when it just kind of hangs out on the surface.  The bass today approved.  They liked it so much I have to replace the rubber legs on the fly. 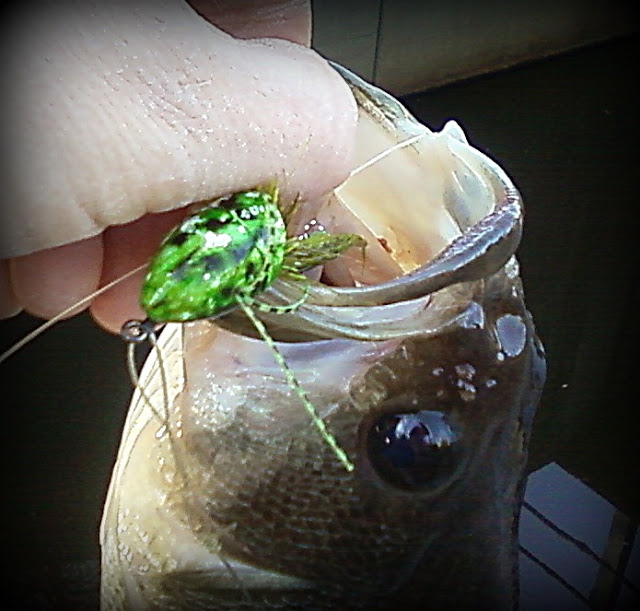 Every time I fish I try to learn something new. This time I figured out I was setting the hook way too early. If I waited an extra second I'd hook the fish every time. I realized too that bass don't hit the same way all the time. It made me think how many times I've seen these similar strikes and thought they were bluegill. The bass did it all from flopping on the fly, creating a wake before striking, inhaling it, sipping it in and flushing it through their mouth like a toilet. Those have to be my favorite strikes. They always are unpredictable. I'm not even sure how the bass does it, they must come from straight underneath the fly. I never see any sign of the fish then WUSH!!!.... The fly is gone. I love it and my poppers will be on the end of my fly line more often this year.
Posted by Feather Chucker at 5:23 PM

Email ThisBlogThis!Share to TwitterShare to FacebookShare to Pinterest
Labels: fly fishing for bass with popper, home made poppers, Largemouth, poppers and bass