The Eno and Friends

After a stressful work week I couldn't think of anything better than to get some time on the water. The theme was gonna be easy. Simple wading, aggressive fish and scenic water. The Eno fit these requirements perfectly. I met up with some friends I hadn't fished with in awhile and we were on the water early. The water seemed cool for the air temperatures we've had lately. There hasn't been many days below 90 degrees in the last two months. There has been some rain lately and I can only assume that's what cooled the water. It seemed to be around 70degrees. The Eno is not only filled with sunfish but also these guys. 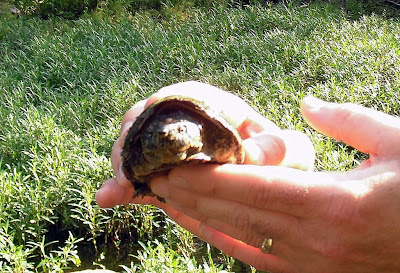 They make you really look at where you are sticking your hand. This was one of the smallest snapping turtles I've seen. The first hole we tried was a place that is normally productive. There's submerged roots and overhanging branches with a run providing oxygenated water that riffles into a deep pool. It's one of those spots you couldn't have made any better if you designed it yourself. Even with all of those features the fishing was pretty slow. 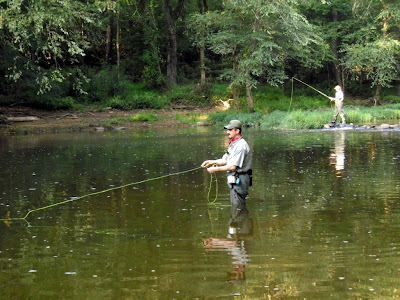 We worked various sections and there were strikes here and there but we didn't see the usual ferocious eruption strikes sunfish provide. There wasn't even many follows or denials. I did have a surprise fishing a olive wooly bugger pattern through a pool. I had a nice tug on the line and I thought maybe this was my first Roanoke Bass. It wasn't meant to be and as the fish came close to the surface I saw the whiskers that can only signify a catfish. The coloring of the fish was pretty vibrant. 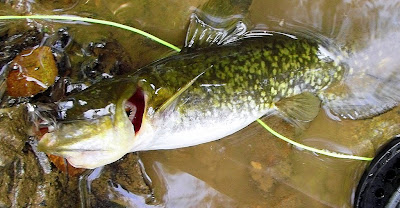 Catfish are funny creatures. Mostly they are caught by accident while fly fishing. There isn't much of a technique to catching them. I almost always catch them on a dead drift. They don't hit particularly hard but they bull dog and stay on the bottom after they are hooked. The fishing picked up soon after the catfish. Most of the fish were caught on poppers. I don't really think the Eno can be beat for top water popper fishing. It's pretty difficult to not catch a sunfish if you work the banks with over hanging branches and cover. I messed around with the waterproof camera some more on this trip. I love the quality of the underwater video that it takes. The downside is it doesn't take great photographs. You have to hold perfectly still to get anything clear. The video here is of an average sunfish you catch on the Eno.

Posted by Feather Chucker at 10:59 AM

Email ThisBlogThis!Share to TwitterShare to FacebookShare to Pinterest
Labels: Bluegill, catfish on the Eno, Fly fishing for sunfish, Fly fishing the Eno, sunfish