Got in some Boone Time 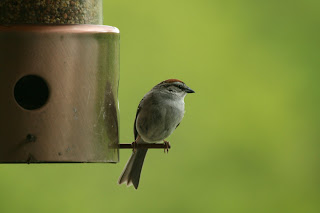 Last weekend was my wifes birthday. To celebrate she wanted to see her brother and sister in law in Boone. We had a great time with them and our neice and nephew. The weather was kind of icky. It rained off and on the three days we were there. I was able to get out on the water with my brother-in-law Russ. I've never fished at dark and we decided to give it a try. We armed ourselves with head lamps and headed to the Watauga River. The sun was going down behind the hills and the water looked still. When we first got there I thought I saw rises here and there but I was fooled by the current and rocks beneath the surface. I worked my way upstream while Russ when downstream. There were many bugs hatching at this time. I could only peg one of them for sure. A black caddis. I had that pattern in my box, tied it on and began to work the water. I love this river. You can make big long casts and don't have to worry about over hanging tree's or sneaking up on fish. After moving up at least half a mile I had not received even a sniff at my fly. I also did one of my trade mark moves. After making several casts....PLOP!!!!!!! My reel fell in the water and made it's way downstream. It of course went into a deep section where I had to start pulling up the line to get it back, the reel kindly kept feeding me line until I got all the way to the backing. So I had to put it back on my line cursing under my breath the whole time. Then wind the line back on the reel.

I decided to head dowstream and see where Russ was at. When I finally saw him downstream he was waving at me to come over. A sure sign the fishing was good where he was at. It was getting pretty dark now and the wading was becoming challenging. I could see pretty well above the water but beneath it all started to look the same. I started to see by feeling around with my feet. Not the best feeling in the world. I was wearing chest waders and this section of river has places easily 5ft. I made it over to Russ with no problems. He had caught 3 all ready and filled me in on where the fish were. They seemed to be stacking up against the bank and you could see them jumping in about a 25yd section of the stream. They were hitting pretty consistently about one jump or rise per minute. Russ was generous enough to give me the good spot while he worked downstream. I tried my black caddis which I was sure was going to make a killing. I still recieved nothing. Russ was using a blue winged olive about a size 14. I decided to try a fly I've never used. It was a goddard caddis. Looks similar to a yellow hammer. It was bashe though. I made a few casts and finally caught my first fish. A pretty rainbow about 10-11inches. Unfortunately it was my only fish for the night. I probably had more hits on my fly but it was so dark it was hard to see my line and impossible to see the fly. I turned on my head lamp and realized it gave me the visibility of only a couple feet. It was great for tying on flies but not the best for navigating. I tried a few more flies but didn't get a bump. We had planned to fish well into the dark but the situation started to seem more dangerous then fun. It was pitch black dark, the headlamps seemed to do nothing, a couple times I had to check to make sure it was still on. Throwing a fly by your face without sunglass's on in pitch black darkness doesn't seem that enticing. We called it a night and were amazed that once we came up out of the river it was a least twice as light. You could see a lot better and the light from the houses seemed to carry further. It was a fun experience and I'd like to do it again this summer. Maybe I'll be braver next time and actually fish well into the night. We'll see.

On Monday I hit up a creek I've never fished before. It was right off highway 321. This creek was recommended by our friend Jasyn who fish's it regularly. I headed up in the morning, there was a slight rain. I could tell the creek had swelled but it wasn't raging. It was really beautiful, it reminded me of a few other's I enjoy fishing. I found a place to park and got my gear ready. The recommended fly was a beetle. I only had one beetle pattern and I just wasn't feeling beetles today with the rain. I decided to find a middle ground, I used a black ant pattern with a foam body. I put in a copper john as a trailer. I've never had much luck on copper johns. Today was no exception. When I first came to the water I caught a fish on maybe my 3rd cast. It was a pretty little 8inch brown. The fish couldn't have been in water deaper than 4 inches. Even at the depth the fish was invisible to the eye. The water was so shallow and narrow that casting was more of just flicking the rod then releasing any line. I almost was using just leader. I continues to work pools and runs until I found a little deeper water. Deep meaning the average was 8-12inches. I didn't get any more hits on the ant or john. I looked around at what was flying. Didn't see much, I did see a huge dobson fly that had just hatched. Out of the corner of my eye I saw a little yellow stone fly fluttering. I remembered hearing someone say, in the mountains always use yellow. I put on a yellow soft hackle. This produced a fish in the next couple casts. It was another brown about 6inches. That would be the last fish of the day. I wanted to fish more but I had some other obligations to attend too. It was a great day of fishing, I'll definately be back to check out this creek.

I didn't take too many pictures this weekend. Mostly because of the weather the rain scared me from breaking out my camera. On Monday it was so rainy I spent most of the day inside, I did spend sometime trying to capture a indigo bunting that frequently hit Russ and Amy's feeder. Those birds are SUPER shy. I did get some pics but they are of the bird far away. 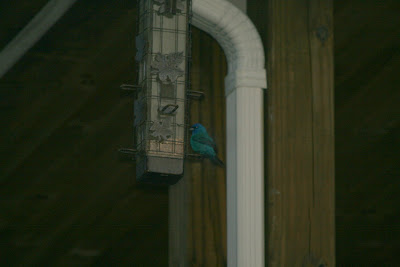 You can tell how blue it is. They are beautiful and seem to be territorial. The best opportunities to get pictures was when the bird was chasing others away from the feeder. If they see you at all, they are gone. They seem to know when you've gone in the house, because I was outside for like an hour and the bird hit the feeder twice both times to chase off a bird. When I lifted my camera or focused the bird was gone. I didn't see the bird again for 40min, then when I went in the house within 5min the bird was back. Frustrating. It was a great weekend and we look forward to going up again soon. I will try to get more pics then.
Posted by Feather Chucker at 4:58 AM