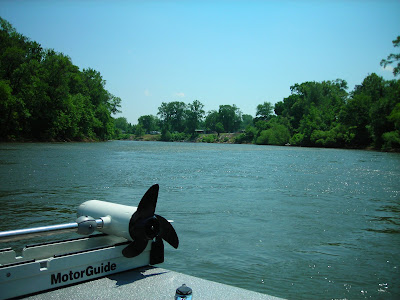 I went up with the Raleigh TU to do some striper fishing this weekend. A buddy was nice enough to let me use his boat. Preston let me use his rod and helped me tie some clousers the night before. I would be useless without that guy. The wife actually let me free the day before mother's day. I decided to make the most of it. I carpooled with another TU member and made a new friend on the way to the river. The anticipation was high and everyone was ready for a crazy day. Some people had came up a few day early. They said the fishing was ok not the best. I couldn't wait to get in the water. We put in and were off to a place called "the big rock". It's a common spot up at Weldon. Jim was the capt on the boat and decided we should anchor by the little river first. We cast for a while with no luck but we did see one striper rise about 5 ft from the boat. It was a pretty good size and if that was supposed to be a small one, I couldn't wait to catch one. The day went on and no one on the boat was having much luck. Jim had been fishing a few days prior so he let Ed and I fish. We tried various casts and different retrieves, not even a bump. It was rough watching the bait casters catch fish as we'd drift past them. They weren't doing it consistently but you'd see someone with a fish on here and there. In between fishing we enjoyed the view and conversation. We were lucky enough to spot a bald eagle. After what seemed to be 10,000 casts I had a fish on. It was a nice striper. We couldn't get the camera to work in time to take a decent pic. Jim said "don't worry you'll just have to catch another one." From how many casts it took me to catch that one, I knew it was gonna be no small task. All day long the water exploded with spawning activity. I've never seen this before and it is a spectacle. A ball of fish rises to the surface, it looks like pirahna swarming around a carcass. What is in fact happening is a female is coming up and the males are surrounding her. They are veracious in their intensity. The water literally boils and their is just flashes of fins and fish jumping. Then they disappear and you'd never know they were there. Every time Jim got up to try his hand at fishing he would hook a striper. I guess it goes to show you, it really is the fisherman and not the rod, reel or fly. Ed picked up a few stripers but I was stuck on my lone one. We decided to call it a day when the weather looked threatening. It was a good call to, while parking the boat lighting shot across the sk in a way I've never seen before. First it was right in front of us then seemed to brans further and further and further. It had to be the longest lightning strike I've seen in my life. Lasted about 5 seconds. The thunder was twice as long. The rain started to pelt us at that point. The boats were loaded and we were on to Fraziers to discuss the reports from the other boats. Only a few had stellar days. The fly of the day seemed to be a blue and white clouser. It was a great experience and I can't wait to do it again. I was really lucky to be paired up with some excellent fisherman. They were great company as well. If you're going to be stuck on a boat with someone for 6hrs, better be someone you can get along with.
Posted by Feather Chucker at 6:39 PM