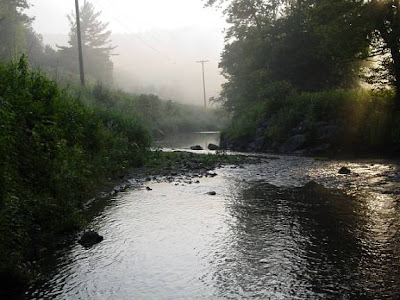 June 20
Elk Fork and Buck Creek
I decided to check these creeks out because I figured they would not be fished much. I arrived at Elk Fork about 1:30pm. I was pretty excited because the stream is pretty secluded and overgrown with bushes and trees. I got into the creek by a construction site. I noticed bugs all around. This gave me an even better feeling of how the fishing conditions would be. On my first cast I was instantly introduced to the bushes on the side of Buck. 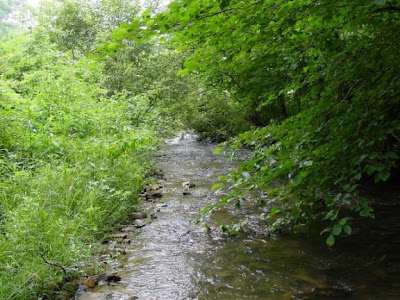 You can see how they make casting more of a theory instead of a reality. I managed to get some decent casts into some nice pools. No luck though. Not even a hit. I walked the stream looking for fish and noticing really pretty damsel flies. 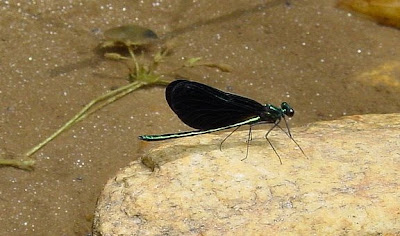 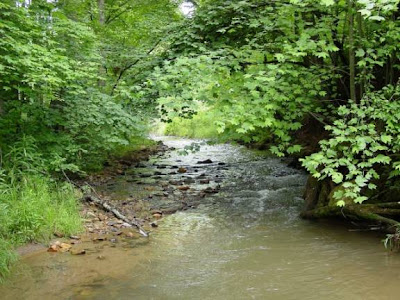 This was about as wide as it ever got. There didn’t seem to be any fish at all. I’m sure there were some fish in some of the holes but they were not interested in anything. I did have some minnows try to viciously kill my fly several times. I ended up catching one. It was amusing for the time being, but I wanted to catch some trout. The rest of the stream yielded no trout. I tried a different section, still nothing. The water was really shallow and murky. I still feel I should have caught something. I decided to give up and try a different stream.
Buck Creek
Buck creek is not on the trout maps but it’s on the NC Delorme. I decided to check it out and had high hopes since it wasn’t a designated trout stream. As I approached the creek I saw there were plenty of places for fish to lie. Also, there was hatchery supported signs all over. I now thought I was definitely going to catch a fish. I drove to the headwaters of Buck Creek hoping maybe people wouldn’t drive that far. I came to a pool that seemed impossible not to have fish in it. 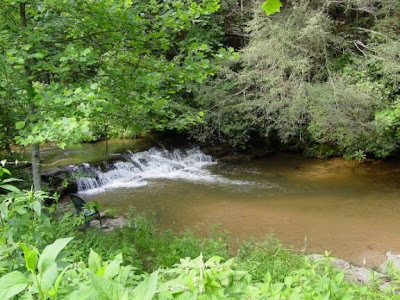 Again I realized how fast a stream can be fished out. When I walked up to this hole, I noticed a chair next to it. Sitting on this chair was a empty carton of Night Crawlers. That didn’t give me a warm fuzzy feeling. I proceeded to fish the hole. I had a nice hit and had a trout on a for a few seconds but he got off. I don’t think he was very big. I fished downstream trying various holes. The creek seemed as barren as Buck. Not fun. I ended up giving up on the day. I went home and checked the stock reports for the streams. I couldn’t find any on Buck Creek. I found that Buck is stocked with 125 fish a month. That really isn’t much if you figure 20 people in a month take their limit all over those fish are gone. That would explain the lack of fish population in the creek. I’m glad I checked these streams out. It gives me a idea of what to look for before I go to a creek. It was still a fun day being in such pretty scenery. I don’t know if I’ll visit these streams again.

Sept 2005
Knife River
I drove to the Knife River not expecting much. This is a heavily fished portion of Boone. It is hit often, probably everyday. I decided to check out a portion that I haven't fished before. First thing, I have to admit, it was really beautiful. I didn't see much fish activity and there was a constant breeze, causing small leaves and things to fall from the trees. The rays of light shining through
would bounce off of them and create a awesome atmosphere. It was like being
in a postcard. Unfortunately the fishing wasn't that great. I decided to move
up stream. I came to a pool I know had to hold fish. We recently had rain from
hurricane Katrina which has caused the water to rise a considerable amount.
I figured the big fish would congregate in this pool. 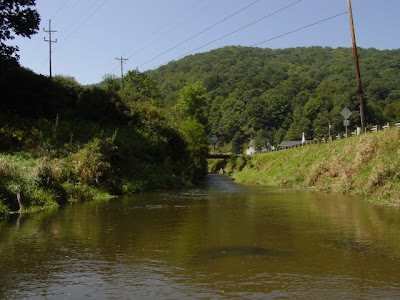 You can see how the fast water moves into this slow calm pool. There had to be fish here. I started fishing from the back of the pool and moved forward. I was using a elk hair caddis. I caught a fish somehow letting the fly drop under the current... 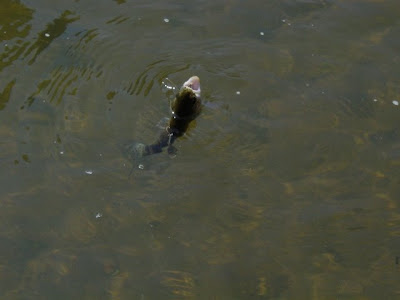 This fish must have been really hungry, you can see the fly in the middle of
it's mouth. I got him in the tongue. This is the second fish I've caught like
this recently. I figure the trout are really hungry or it's just a coincidence.
I tried to get a better picture of this guy but this is all I came up with. 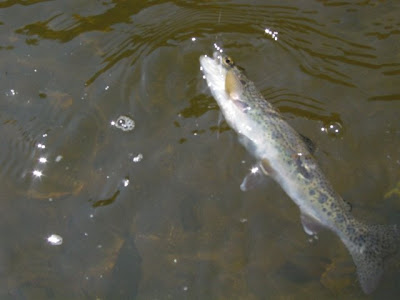 He was about 11-12 inches, not a monster but a fun fish none the less. Plus he was the first fish of the day. I fished the pool some more and it was a lot deeper then I thought. I didn't feel safe moving further up the stream. I decided to try a section I've always wanted to fish but haven't had a chance to yet. 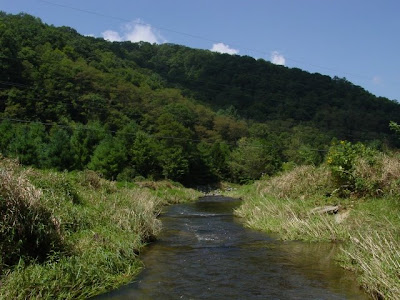 This is another beautiful section. It's right up stream from the pool shown in the other pic. I could see fish jumping up at some branches on the side of the stream and the splashes seemed to be big. I figured this was a good chance to catch a nice size fish. I tried a hopper or what I had that looked like a hopper. No hits or anything. I figured I spooked the fish because I didn't seem them jump up at the branches after I started casting. I continued to fish the surrounding area, there's definitely fish here and good opportunities for nice size fish. I think it was just the wrong time of day to get them. It was around 1pm and the the sun was not in my favor. My shadows were right over the water. I decided to call it a day. At least I caught one fish. It was fun just being out in such great weather.

Oct 2005
DH River
I heard about a friend catching a 22inch fish down here so I decided to check it out. I didn’t catch one that big but I did manage to catch this guy. 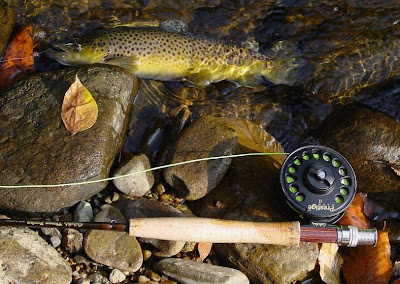 Not a monster but still a nice fish. The day was great. Beautiful, fish, weather and water.

Nov 2005
Glitter Creek
I fished the Glitter today after a tip that it was stocked recently. I've never seen so many fish. I was almost stepping on them at times. It was ridiculous. I caught a few here and there but I missed about 20. I caught this guy in a little riffle. 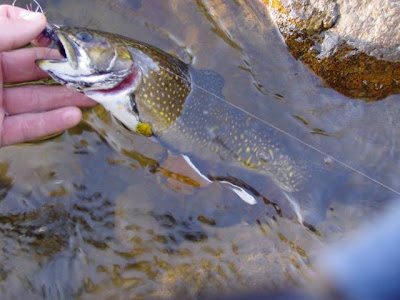 The water and weather was really nice. I was pretty much fishing by myself. I decided to try a upstream section I haven't fished before. I saw tons of fish and I came to a section where there was a tree that had fallen in the water. The branches were bare. On the far side of the tree where the bank was there was a rock over hanging the water. As I walked up closer I could see something swimming in between 2 of the branches. I could tell it was a big fish. I decided to tease it with a nymph it wasn't interested. I switched up to a wooly bugger, it hit, then turned, from the flash and the movement it made I could tell this fish was a monster. I switched up again with a black wooly bugger. This time the fish wanted it bad. He hammered it. I think he was surprised to be hooked because he didn't fight hard at first. Then when he realized something had him he went crazy causing a 2foot splash to appear. He used all the tricks in the book, trying to get tangled around the branches of the tree and going downstream. I had to remind myself I was wearing waders, I instantly jumped further into the water and spun my rod around the branches to make sure I didn't get tangled. It took a good 5min to finally land the fish. Then there was the exciting part of trying to get the picture. 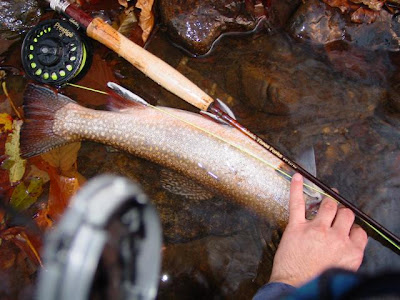 He still had a lot of fight left in him. He didn't want to stay still and wouldn't you know it, my battery was seconds from dying. I felt killing this beautiful fish wouldn't be worth getting a great picture so I took one more, 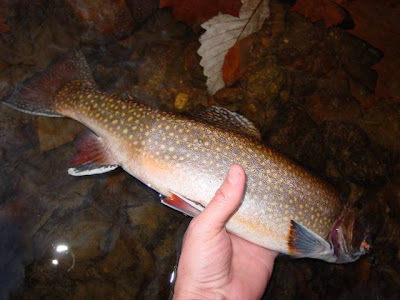 and let him loose. I decided to end it on that note. I couldn't see the day getting any better. What was unbelievable is I saw bigger fish then this one in the creek. I want to think this fish was 20inches or over, but now that I'm really studying the pictures I think he may be just under that. Still a great fish and easily close to 3lbs. I was ecstatic. It's pretty funny that the 2 big fish I've caught this year have been brooks. I truly believe the record brook trout is in the area. Maybe not the Glitter but probably some stream within 100miles.
Posted by Feather Chucker at 8:46 AM